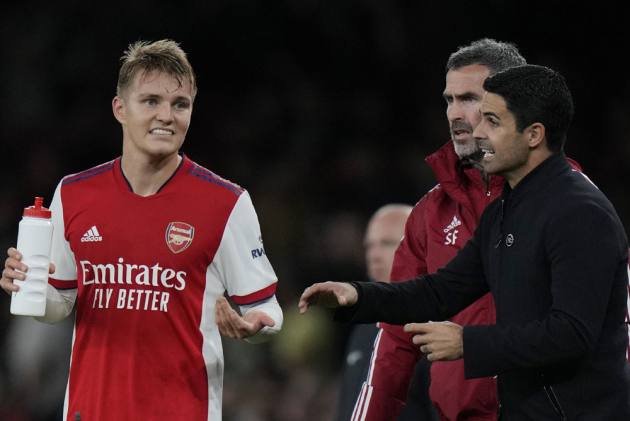 A look at what's happening in European soccer on Friday: (More Football News)

Arsenal hosts Aston Villa after a tepid start to the season that's been summed up by drawing the last two matches to sit 12th in the Premier League after eight games.

It took Alexandre Lacazette's late equalizer to grab a point against Crystal Palace on Monday and the forward will now be pushing for a start against Villa. The 30-year-old Frenchman has played only 72 minutes in the league so far.

There is no new contract on offer with his current deal expiring at the end of the season. Bukayo Saka could miss Friday's game after being forced off at halftime on Monday after being kicked on the calf. Villa is in 13th place with 10 points.

Osasuna goes for its fourth straight victory in the Spanish League when it hosts Granada. A win would leave the team tied on 20 points with leader Real Sociedad ahead of the weekend matches.

Osasuna hasn't won four in a row in the league since 2010. It won four of its last five matches, with the only setback a home loss against Real Betis. Granada is just outside the relegation zone with six points from eight matches.

There are two matches involving sides at the wrong end of the table as Sampdoria hosts Spezia and Genoa visits Torino. Samp has lost three of its past four matches, drawing the other, and is in 17th place, above Genoa and Cagliari on goal difference alone.

Spezia is only a point ahead after last week's win over bottom-placed Salernitana snapped a run of three straight losses. Torino is just two points above the relegation zone but has faced Lazio, Juventus and Napoli recently.

Mainz hosts Augsburg with both teams looking to turn around wretched recent form. Mainz won three out of its first four league games this season, but none of the four since, and has dropped to 11th.

Augsburg is 16th, hasn't won any of its last three games and has the unwanted record of joint-fewest goals scored with four from eight games.

Last-place Saint-Etienne is looking for its first win this season against Angers. The 10-time champions have just four points from 10 games and were routed 5-1 by Strasbourg in their previous game last week.

Saint-Etienne will be without suspended midfielder Zaydou Youssouf and has several doubtful players, including goalkeeper Etienne Green and right back Yvann Maçon.