England are through to their first major final in 55 years, but their Euro 2020 semi-final win over Denmark was marred by a contentious refereeing call 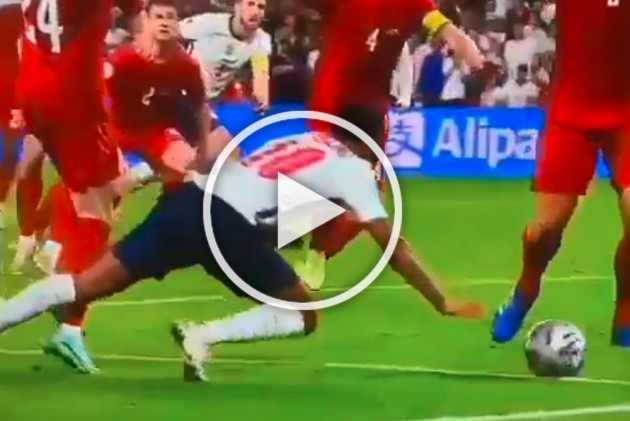 Raheem Sterling burst into the penalty area in extra time of the semifinal match against Denmark and appeared to lose his balance following a challenge by Joakim Maehle. The England winger eventually fell to the ground after a nudge from another Denmark player, Mathias Jensen.

Let's be clear...this is NOT a dive! The freekick denmark scored shouldn't be awarded then either cos that was soft too. Contact was made in the box, VAR checked and it was awarded. Great run by @sterling7 #ItsComingHome @England #bbceuro2020 #England #englandvdenmark #Sterling pic.twitter.com/6ge6FBaU6J

The referee pointed to the penalty spot, the decision stood after a review by the video assistant referee and Harry Kane scored — off the rebound after the penalty was saved — to give England a 2-1 win and a spot in the Euro 2020 final.

Denmark coach Kasper Hjulmand said he cannot understand how such a big call was made at such a crucial moment.

“You can't pass by a decision that has so much influence on the game,” Hjulmand said. "I couldn't see that as a penalty.

“One thing is to lose a game ... but this is a disappointment. It's bitter.”

Denmark's players were also unhappy, surrounding referee Danny Makkelie after he blew for a penalty.

England coach Gareth Southgate said he hadn't seen a replay of the incident.

“There is VAR,” Southgate said, "so I assume they checked it and stuck with the referee's decision.”

The standard of refereeing has been widely praised during Euro 2020.