England have won a European Championship knockout game after going behind for the first time ever, and other interesting stats from their Euro 2020 semi-final against Denmark 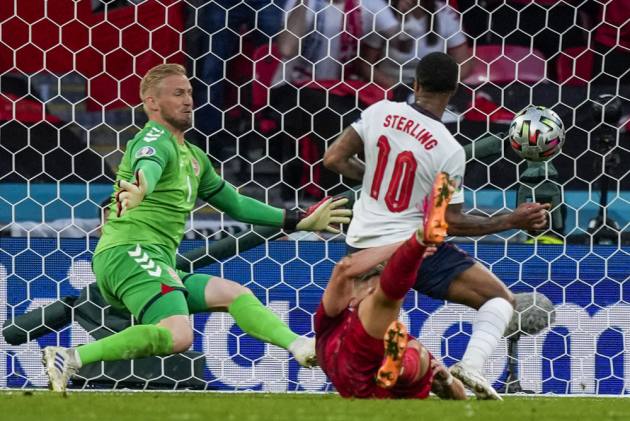 It looked like the second semi-final of the UEFA Euro was also heading for a penalty shoot-out too. But a Raheem Sterling won a controversial penalty then a lucky Harry scored from the rebound to give England a 2-1 win over Denmark in extra time on Wednesday at Wembley Stadium.

Gareth Southgate's Three Lions face Italy, who defeated Spain 4-2 on penalties, in the final of the European Championship at the same venue on Sunday. Earlier, Mikkel Damsgaard curled a free-kick into the top corner in the 30th to give the Danes the lead.

But an own-goal by Simon Kjaer in the 39th helped England level the score in front of a packed Wembley crowd.

Here are statistical highlights of the match:

England have reached their first major final (Euro/World Cup) since the 1966 World Cup, 55 years ago, the longest gap between final appearances in the history of the two competitions.

England have made it to their first ever European Championship final. Their 37 games (including this match) was the most any team had played in the competition without ever reaching the final.

England have won a European Championship knockout game after going behind for the first time ever, while it’s the first time they have done so in a major tournament since a 3-2 win over Cameroon in the 1990 World Cup quarter-final.

This was the seventh game at EURO 2020 to go to extra-time, with the 1990 and 2014 World Cups the only major tournaments (Euro/World Cup) to see more matches go to the extended period (8 each).

Simon Kjaer's own-goal is the first England have benefitted from in European Championship history, and third overall at a major tournament (against Czechoslovakia and Paraguay in the 1982 and 2006 World Cups).

Simon Kjaer’s own-goal was the first Denmark have ever scored in European Championship history and the 11th at EURO 2020, two more than every previous edition of the tournament combined (9).

Jack Grealish became the third England player to be both subbed on and subbed off in a match at a major tournament (Euro/World Cup), after Jamie Redknapp (vs Scotland in EURO 1996) and Aaron Lennon (vs Portugal in the 2006 World Cup).

Jordan Pickford set a new record for an England goalkeeper for most minutes without conceding, overtaking Gordon Banks' 720 minutes set between May/July 1966 (725 mins in total).

At 19 years and 305 days, Bukayo Saka became the youngest Englishman to start a match at the semi-final stage or later of a major tournament (Euro/World Cup).