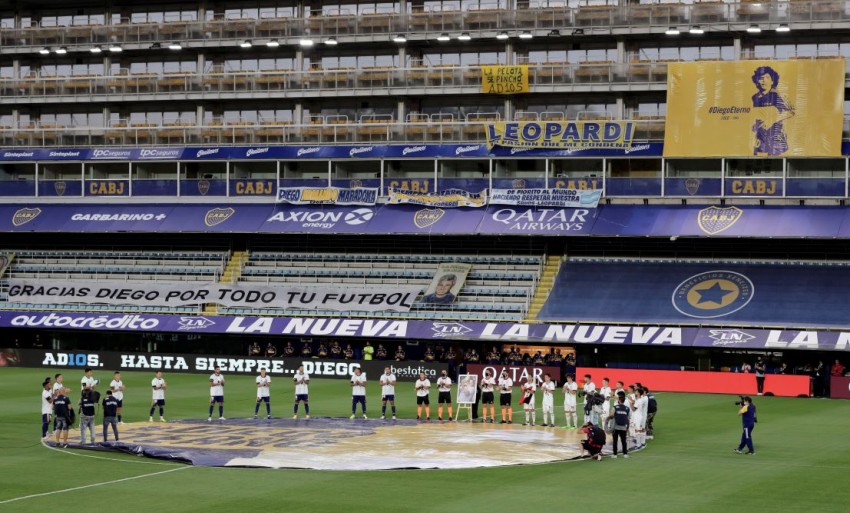 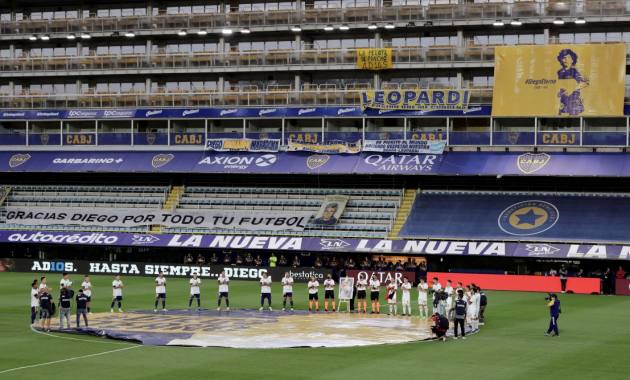 Boca Juniors made a moving tribute to the daughter of club legend Diego Maradona during their 2-0 win over another of his former sides Newell's Old Boys on Sunday.

Argentina great Maradona, regarded by many as the best footballer ever, died at the age of 60 last Wednesday.

Such was his influence on the sport, homage has been paid across the world – from compatriot Lionel Messi revealing a Newell's shirt during a goal celebration earlier in the day, to Napoli confirming plans to rename their stadium Stadio Diego Armando Maradona and revealing an Argentina-inspired fourth kit in their weekend win over Roma.

Boca, where Maradona spent two spells, had their Copa Libertadores clash with Internacional postponed just a few hours after the 1986 World Cup winner died, meaning the visit of Newell's to a mostly empty La Bombonera was their first game since his passing.

Colombia international Edwin Cardona opened the scoring with a free-kick, before the team ran over to the sidelines and produced a Maradona jersey, laid it on the floor and applauded in front of the private box where his visibly emotional daughter Dalma was watching on.

Boca coach Miguel Angel Russo, a former Argentina team-mate of Maradona, said after the game: "I knew it was going to be an uphill struggle. The phrase I used was that, to pay homage to the best in the world, you have to play well and that Boca needed to win.

"It was the best way to pay homage to him, to play this beautiful sport well that he played to an incomparably high level.

"We got through it in the best way. I am happy for the victory. The day has been covered by a blanket because of what Diego Maradona was as a player and person."

Every Boca player wore Maradona's name on the back of their jersey throughout the match and defender Carlos Izquierdoz could not help but feel humbled.

Nevertheless, he believed the team acted responsibly with respect to donning the name of one his country's most famous players.

"The truth is that wearing a name like that on my shirt gave me a little embarrassment, so to speak," he told FOX Sports.

"We tried to do it responsibly. I'm happy for tributes that have been paid to him everywhere. We were able to win, to show that we wanted to play – the best tribute was to give his family a win.

"They were special moments. The truth is that all this generates emotion, remembering such an emblematic player who represented so much for Argentine footballer, the country.

"He always put the flag on his shoulders. He deserved recognition."