Barcelona Vs Atletico Madrid, Live Streaming: When And Where To Watch La Liga Title Deciding Match 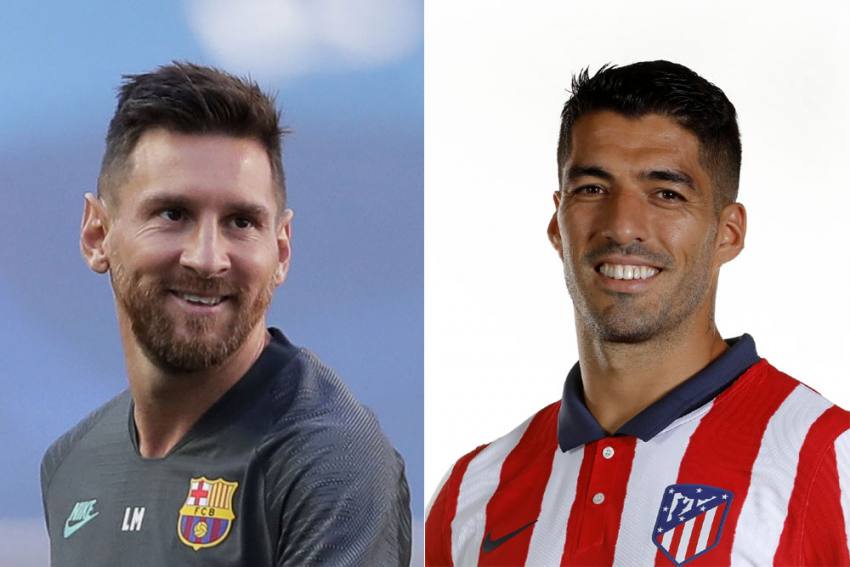 Lionel Messi is set to face Luis Suárez in a potential La Liga title deciding match. Suarez missed the first meeting of the teams in November due to the coronavirus.
File Photos
Outlook Web Bureau 2021-05-07T21:41:06+05:30 Barcelona Vs Atletico Madrid, Live Streaming: When And Where To Watch La Liga Title Deciding Match

Luis Suárez and Lionel Messi often spent time hanging out together at their neighboring homes on the Mediterranean coast when taking a break from scoring goals for Barcelona. (More Football News)

It will be less relaxing on Saturday when Suárez returns to Camp Nou with Atlético Madrid, aiming to inflict a major blow on his former team's title hopes in the Spanish league.

Facing mounting debts and desperate to reduce its payroll, Barcelona sold the 34-year-old Suárez to Atlético on the cheap at the start of the season.

The deal, which could reach 6 million euros ($7 million), proved to be a steal for Atlético. While not as mobile as he once was, Suárez's world-class finishing touch gave Atlético coach Diego Simeone the scorer he had failed to find since Antoine Griezmann swapped clubs for Barcelona.

Suárez missed the first meeting of the teams in November due to the coronavirus. Yannick Carrasco's goal — and its smothering defense — gave Atlético a 1-0 win that helped to build a lead that it is still clinging to with four rounds left.

Atlético plays third-place Barcelona a day before second-place Real Madrid hosts fourth-place Sevilla on a weekend that promises to shake up the closest title fight in years.

Atlético is two points ahead of both Madrid and Barcelona, while Sevilla is a further four points behind.

Suárez departed Barcelona as its third highest scorer with 198 goals, behind César Rodríguez (232) and Messi (670). He helped Barcelona win 13 titles after arriving in 2014 from Liverpool, including four Spanish league trophies and the Champions League in 2015.

Messi complained publicly after Barcelona got rid of Suárez, who had wanted to stay.

Barcelona took a conciliatory approach on Friday toward Suárez, who scored 21 goals for Barcelona in the 2019-20 season.

“We were teammates. Today we are rivals. But we will always be friends, Luis Suárez,” Barcelona tweeted along with a photo of Suárez embracing Messi and other former teammates.

Since his move to Spain's capital, the Uruguay striker has become Atlético's top weapon. He leads the team with 19 goals in the league.

“He has met all the expectations we placed on him,” Simeone said.

Simeone will have to choose from Carrasco, Marcos Llorente, Ángel Correa and João Félix to accompany Suárez in attack, giving Barcelona coach Ronald Koeman lots to worry about.

“It will be strange for (Suárez), but also for my players. But we are professionals and each one of them will give it their all,” said Koeman, who is suspended for the match.

“We will have to focus on him, as well as the rest of his team that plays behind him. We must think about how we must pressure them to disrupt their attack.”
Atlético also has an opposition player on its mind as Messi looks to add to his league-leading 28 goals this season. (AP)