When Abbas Karimi jumps into the pool at the Tokyo 2020 Paralympic Games starting August 24, the brutal atrocities carried out by the Taliban in Afghanistan will cross his mind once again.

Born without arms in Kabul, Abbas Karimi had fled Afghanistan as a 16-year-old. His escape from a land ravaged by war, was not only hazardous but replete with unsurmountable challenges. Yet, he made it.

MUST READ: Extraordinary Stories Of Refugee-Athletes In Olympics

Mondays visuals of thousands clamouring for a seat on a flight out of Kabul would have shocked Karimi and all those who braved the odds in Afghanistan and escaped for a better life.

Karimi landed in Turkey as a refugee in 2013 and in his four years there, life gave him another opportunity, that of a swimmer who would pursue an Olympic dream.

Come Tokyo 2020 Paralympic Games, Abbas Karimi will be one of the six extraordinary Para athletes who will sending a message of hope and inclusion to refugees with disabilities in society and sport.

At least two more athletes from Afghanistan wrote their own chapters in the just-concluded Tokyo Olympics. As part of the 29-member International Olympic Committee Refugee Olympic Team Tokyo 2020, Abdullah Sediqi (taekwondo) and Nigara Shaheen (judo) grabbed spotlight. Both had fled Afghanistan in the wake of war and atrocities carried out by the Taliban.

For all refugee athletes, especially those from Afghanistan, Syria, Sudan and Congo, there is a common storyline. All of them ran away from their countries in the grip of civil war and brutalities by Islamic militant groups like ISIS or the Taliban.

Karimi's life is extra-ordinary. He was a curse on the family because he was born without hands.

“When you are born disabled without arms or legs or missing body parts in Afghanistan, you are considered hopeless,” he said. “I was getting bullied. A lot of the other kids called me names – things like ‘armless' or 'cripple’. I had a really angry childhood.”

At 12, he took up kickboxing to fight. What was meant to be used for defence soon translated into fights and Karimi left several people with bloody noses. Such horrible acts forced his brother to build a 25-metre community swimming pool and Karimi was thrown into the pool with a life jacket on.

"Swimming calms me down. It’s like a shield for me, always protecting me. If I’m upset or anytime that I have any issues, I just get in the water and it relaxes me. Swimming saved my life... I believe without swimming, I’d be a very dangerous person, I’d be in trouble. Swimming opened my heart. It's in my soul.”

In his first competition, Karimi won the Afghan national championship. But his father had other ideas. He wanted Karimi to become a leader in the mosque because there was no future for a swimmer in a land shredded by war.

“My tribe, the Hazara people, are often killed when they are caught by the Taliban. There were a lot of bombs exploding in Kabul. I wasn’t the type of kid to stay inside the house so I could have been killed at any time if I stayed.”

Karimi hatched a plan to flee with the help of an older brother. First he flew to Iran and from there the arduous path to Turkey began across the Zagros mountains amidst extreme weather. Smuggled in the back of truck and them by foot, Karimi dodged the Iranian border police and finally landed in Turkey.

He lived in four different refugee camps in Turkey. He begged those running the camps to let him swim. From the second camp, Karimi started going to the swimming pool again. Karima won 15 medals including two Turkish national championships. He was even photographed with Turkey’s President Recep Tayyip Erdogan.

But Karimi could not participate in international tournaments because he did not have proper papers. A Facebook swimming clip he posted changed the course of his career. In September 2015, Mike Ives, a retired teacher and former wrestling coach in the United States offered to help Karimi.

In June this year, 24-year-old Karimi was included in the IOC's Refugee Paralympic Team.

Abdullah Sediqi and Nigara Shaheen have similar stories. Both fled Afghanistan at different stages of their lives but Shaheen is perhaps a role model that many Afghan girls would now dare look up to.

Nigara Shaheen was born in Afghanistan. Because of the war in homeland, her family fled Jalalabad on the banks of the Kabul River when she was six months old. Her parents carried her for two days and two nights across the border into Pakistan in 1993.

At Tokyo 2020, Nigara made her dream debut when she stepped onto the mat on hallowed ground in the Nippon Budokan, the home of judo.

Shaheen first tried karate, but found solace in judo, starting when she was 11 while living as a refugee in Peshawar.

"I found in judo the way that allowed me to find confidence and show my strength when I needed it," she has said. 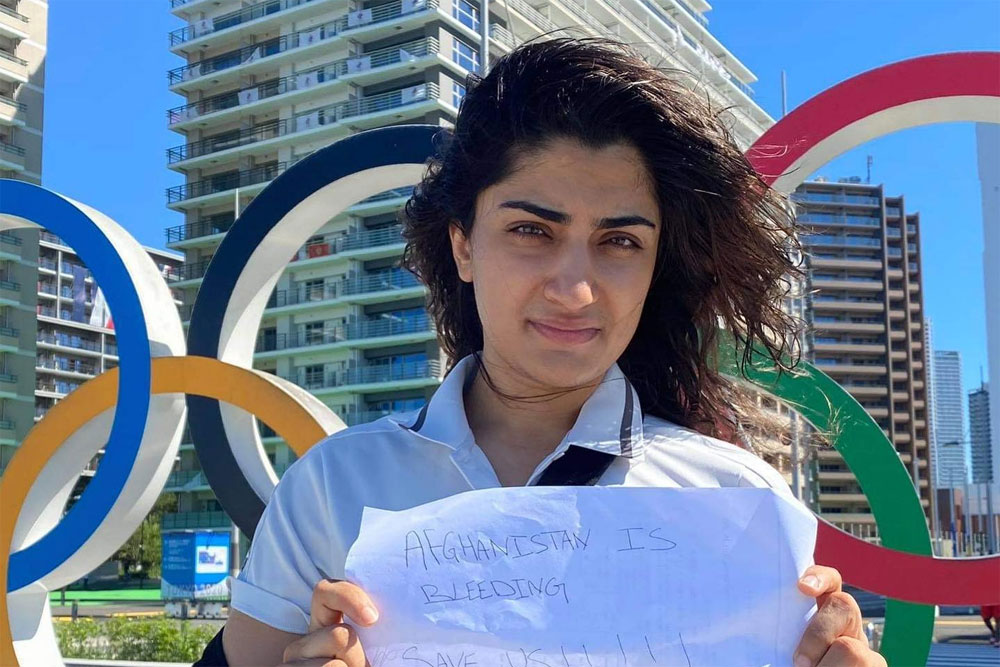 Nigara Shaheen wants to be a role model for Afghan women but with Taliban in power that looks like a dream now. Photo: Facebook

Harassed and bullied in life, Shaheen has been bold to stand up for what she believes in. She has spoken up for women's rights in Afghanistan and Pakistan.

"Unfortunately, there are so many social taboos connected with women playing sports in my country. I would be proud if in the long run I could be considered a role model for other girls or women in Afghanistan... I personally believe that Afghanistan needs us and I am proud to be involved in the future of my country," she wrote in her blog

She was quite bitter about Taliban's growing influence in Afghanistan.

Abdullah Sediqi escaped armed gangs in Afghanistan and set out for Europe on foot, enduring endless 12-hour day walks, to arrive in Belgium where he trained in a refugee camp. The pandemic hit him hard too as he lost his mother to coronavirus before he could return to see her again in Afghanistan.

On his Olympic debut for the Refugee Olympic Team, Sediqi faced reigning Olympic champion Zhao Shuai of China. In a spectacular display of courage and determination, the Afghan rattled Zhao with kicks and punches but was eventually eliminated in a closely fought bout.

Sediqi's defiance and bravery in defeat came as no surprise considering he has been fighting the odds since he was eight years old. His has been a story of escape and survival, resilience and refusing to give up. 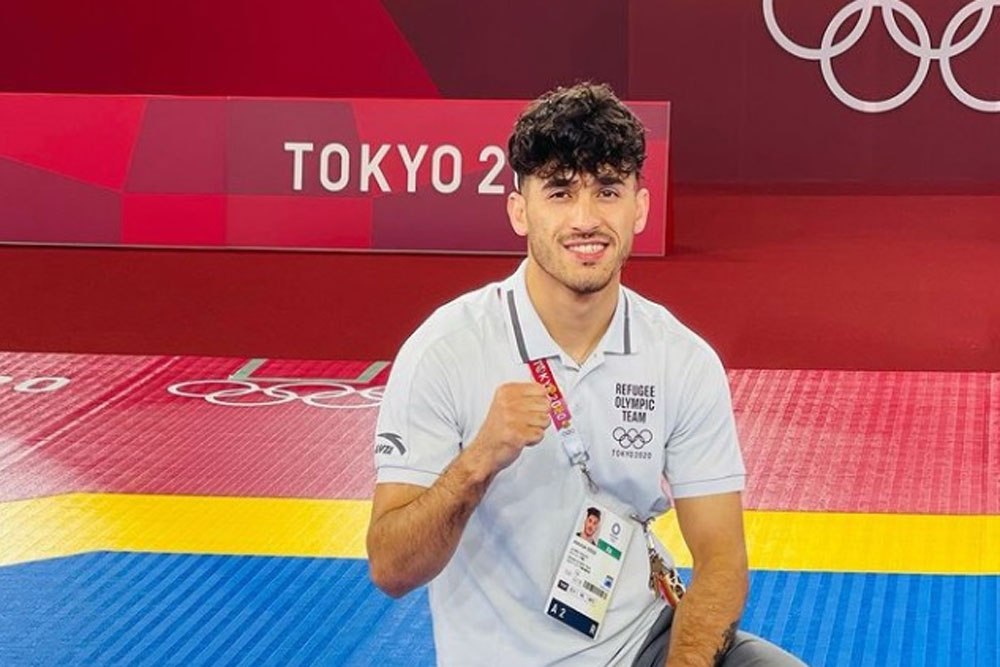 Taekwondo gave Sediqi an option to forget the war and the constant danger of insecurity and danger associated with it.

When armed gangs threatened to stop his taekwondo and take his life, Sediqi escaped to a Belgian village near Antwerp four years ago. It was quite an odyssey. His mother's death inflicted sorrow but Sediqi's memorable Olympic debut will have given him strength and belief to last a lifetime.