While BJP offers a conservative, rightwing, majoritarian brand of politics, Congress Party is the only party in the country, with a matching alternative base and ideology to challenge it. 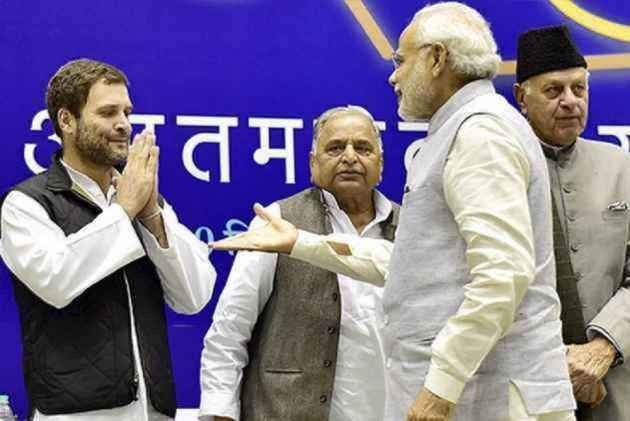 The unexpected fighting result in Gujarat election followed by spectacular success in Rajasthan by-election has not only galvanised Congress Party cadres all over the country, it has also brought the hope that the 2019 election is not a done deal for Modi-Shah duo.

The new President of the Congress Party, Rahul Gandhi has been doing all the right thing and making all the right noises these days as expected from him by the political pundits of the country. Since his Berkeley performance, not only the BJP leaders have almost stopped mocking him, but some of BJP’s partners in NDA have started showing appreciation of his leadership potentials. The rumor of rebellion by senior Congress leaders after his takeover of the Congress presidency has also disappeared. Rahul Gandhi’s well-publicized temple visits have unnerved the Hindutva outfits as it threatens their design to acquire the sole ownership of Hindu voices. BJP finds it difficult to target Rahul Gandhi on the issue of religion as it fails to get the same traction as of its strategy against his mother, Italian born Sonia Gandhi since mid-1990s.

Slower economic growth and more importantly failure to create jobs have brought doubts over Modi’s electoral invincibility. Adding to the BJP’s electoral trouble in the western states, its most dependable ally of all time, Shiv Sena in Maharashtra has decided to go alone in 2019 election. In the South, another ally TDP has already given a notice. In Bihar, a realignment of BJP’s allies in the cards.

Modi and Shah occasionally talk about a ‘Congress Mukt Bharat’ these days, but the slogan is fast losing its sheen. This is a good and hopeful sign for Indian democracy. The call for a ‘Congress Mukt Bharat’ is in all practical purposes, a call for ‘Opposition Free India’. The regional parties, except RJD, have sometime or other become the ally of the BJP and lack an ideological clarity vis-à-vis Hindutva politics. Moreover, besides the Congress Party, no other party in the opposition has a national presence to challenge the ruling party, BJP and to be a national alterative politically. Thus, if there is no Congress, then there is no viable opposition to the ruling BJP. India, whose survival as a country is critically dependent upon maintaining its character as a secular democracy, it will be suicidal to provide an opposition free open space to majoritarian BJP and authoritarian Modi to get elected and rule unchallenged.

It is not only in May 2014, political pundits in India have for the first time started writing the obituary of the Congress Party. They wrote it in 1967, 1977, 1991, and in 1997. In 2004, not even Congress Party had any hope returning back to power being led by a foreign-born reluctant and reclusive leader, who was reading her speeches with a heavy accent, while the party in power then, BJP was being led by a charismatic and popular orator and intoxicated with ‘Shining India’ campaign blitzkrieg. Still, Indian electorates voted the Congress back to power and kept it there for 10 years. Congress Party, in spite of its declining influence, is still a pan-India party, with a glorious history and an unchallenged leadership. Electorates in any democracy always prefer to have an alternative option to make a choice at the time of election.  That choice for them to be rational, there has to be a party and leader available with a different ideological platform and policy agenda. While BJP offers a conservative, rightwing, majoritarian brand of politics, Congress Party is the only party in the country, with a matching alternative base and ideology to challenge it. It will be self-destructive act for Indian democracy and its believers to keep denouncing and destroying Congress Party further and hoping for another political constellation to emerge nationally to be able to challenge the BJP. No one knows, what the country will get as an alternative. Moreover, the process might take too long and it might be too late.

The growing rural discontentment and failure to create enough job opportunities for increasingly aspirational youth population are the reasons for BJP’s vulnerabilities and opposition’s possibilities. Hard Hindutva and ultra-nationalism have limitations and cannot take BJP too far while the economy has failed to bring the promised ‘achhe din’. No doubt, India is passing through a very difficult time. At this point, it is vital for the voters to get a viable alternative to BJP in the next election. The Congress Party with its new President is playing a smart politics in avoiding to take on BJP on Hindutva issues, but targeting it where it is most vulnerable, on the issues of economy and governance. Moreover, Rahul Gandhi unlike his mother can project himself as a Hindu as good as anyone else in BJP. The ruling party had not taken this factor into consideration before the Gujarat election. There is no doubt, Rahul Gandhi has a lot to do to be able to defeat foxy Modi-Shah duo in the next election. He needs to use this momentum of success in recent elections fast to bring necessary leadership changes at the state level, and to stitch key alliances with the help of his mother. Indian democracy and Indian electorates need a stronger Congress to challenge BJP in the next election.

A robust opposition is a basic need for any healthy democracy. The position of opposition determines the democratic character of the country’s institutions and pluralistic nature of the political system. A democracy without opposition is not a democracy, but an authoritarian rule somewhat legitimized by a farcical electoral exercise.  As a precondition for democracy, an institutional presence of the political opposition is critical. Democracy, as French philosopher Raymond Aron describes “in which the peaceful rivalry for the exercise of power exists constitutionally.” The need for a strong ideological opposition with clear commitment to secular values is particularly vital for a multi-religious country like India, which is being ruled by the BJP under Narendra Modi, with an open admiration for rightwing majoritarian politics. Thus, the revival of the Congress Party under Rahul Gandhi as a powerful political alternative is to be seen more important for the country than for the party and its supporters.