Jayalalithaa's Death To Be Probed By Retired HC Judge, House To Be Turned Into Memorial: CM Edappadi K Palaniswami

The Chief Minister Edappadi K Palaniswami said that Jayalalithaa's Veda Nilayan bungalow in Poise Garden will be converted into a government memorial and will be open for the public. 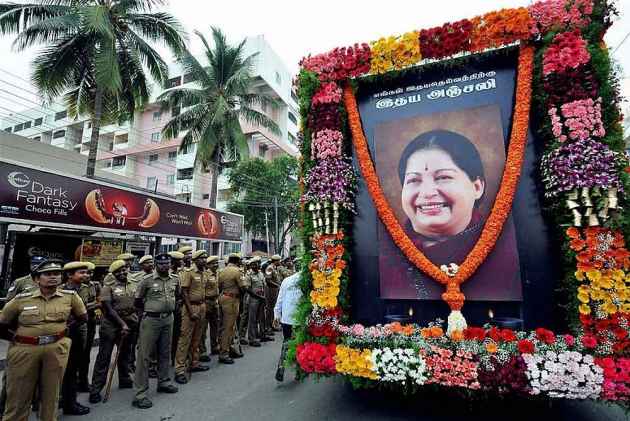 Chief Minister of Tamil Nadu Edappadi K Palaniswami has announced a probe into the death of J. Jayalalithaa, former CM of the state.

Tamil Nadu govt says the inquiry commission will be headed by a retired High Court judge. the name of the judge who will head the probe will be announced later, said the CM.

The Chief Minister also said that Jayalalithaa's Veda Nilayan bungalow in Poise Garden will be converted into a government memorial and will be open for the public.

The Panneerselvem faction of the AIADMK had long since demanded a probe into the death of party supremo late J.Jayalalithaa.

Ahead of  merger between the two factions, the AIADMK (Amma) led by CM Palaniswami announced earlier that the party is now being piloted by the office-bearers appointed by Jayalalithaa.

The faction had last week revolted against the Sasikala clan by deposing both VK Sasikala and her nephew TTV Dhinakaran from their respective posts and prepared the ground for the merger of the EPS and OPS factions.

“Since Dhinakaran’s appointment was not legally valid, all the appointments made by him recently were also not valid. Similarly his instructions need not be followed by party cadres or functionaries,” said the statement signed by 27 office bearers led by EPS.

The statement also declared that party cadres would not like to see anyone other than Jayalalithaa as general secretary which amounts virtually disowning Sasikala’s temporary appointment as general secretary in December 2016 after Jayalalithaa’s death. Strangely the statement was printed and signed on the original AIADMK letter head and not that of AIADMK (Amma) implying that it was the decision of the original undivided AIADMK and not just one of its factions.

The CM's announcement today almost fulfills the demands made by O. Panneerselvem's faction of AIADMK.  Only demands that needs to be fulfilled to allow the merger is Sasikala's family's expulsion from the party.

In February, Sasikala was found guilty of corruption by the Supreme Court and was sentenced to four years in prison. She is barred from contesting an election for the next 10 years.

Before her arrest, then chief minister Panneerselvam was locked in a power tussle with Sasikala sparking a political crisis on who will be late J Jayalalithaa’s successor.

Events took a dramatic turn in the evening of February 7, when Panneerselvam announced that he was forced to resign by Sasikala on February 5 for the latter to take over.