OPS Vs EPS Vs TTV: A Raging Battle Among Initials In AIADMK

It is going to be a long drawn battle till someone establishes absolute control. 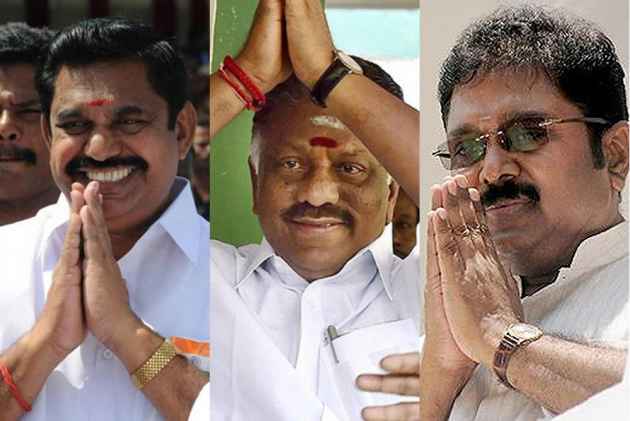 The current political battle in Tamil Nadu can be abbreviated into one between initials – OPS versus EPS versus TTV. In February it was EPS and TTV versus OPS. In April EPS rebelled against TTV. In August EPS downsized TTV in an attempt to make peace with OPS. But OPS remained undecided and had to be pushed by NaMo to shake hands with EPS even as TTV flexed his muscle.

That jumble of alphabets symbolizes the state of confusion the ruling AIADMK finds itself in nine months after Jayalalithaa’s death and her self-annointed successor Sasikala was sent to jail. Even when the party – so badly divided three ways – attempted to reunite it only led to more blood-letting. “Unless Chief Minister Edappadi  Palaniswami (EPS) and O. Panneerselvam (OPS) sink their egos and differences and get together, TTV. Dhinakaran could emerge as a serious challenger to both. For them unifying both the factions is not just an option anymore but a necessity,” cautioned political commentator Ravindran Duraisamy.

Dhinakaran, who found himself dethroned from the post of deputy general secretary by EPS and his band of Ministers, hit back by a show of strength at a massive public meeting at Melur near Madurai on Aug 14. “Some people (EPS) think they can run the party from behind closed doors of the party headquarters. The crowd here should send the message that real support is derived from such devoted cadres,” he asserted during a 40 minute speech even as the large crowd cheered repeatedly.

Dhinakaran’s detractors sought to belittle the turnout as a gathering of mostly cadres from his own Thevar community, but even police intelligence reports admitted that they had turned up from almost every district of the state and not just the half a dozen Thevar dominated ones. “The success of the rally should not be gauged just by the numbers but also the manner in which Dhinakaran’s speech was cheered repeatedly. It showed that he has emerged as a leader in his own right,” argued P. Vetrivel, MLA and TTV loyalist.

More worrying for Chief Minister EPS was the presence of 20 MLAs along with Dhinakaran that could undermine the stability of his government which is surviving on a wafer thin majority. Even if the ten MLAs with OPS extend support Dhinakaran’s ginger group of 20 MLAs would pose a perennial danger. It could become a threat if more MLAs show up in TTV’s camp during the five other public meetings he has planned in the coming weeks.

Dhinakaran though remained conciliatory saying he wanted the EPS regime to complete its full term as it was “Amma’s government” and he only wanted to reunite the party, reclaim the ‘Two Leaves’ symbol and put up a strong showing in the 2019 Lok Sabha elections. He even held out an olive branch to Delhi urging the Ministers to maintain good relations with the Centre so people friendly schemes could be implemented in the state.

More importantly Dhinakaran’s message to two factions of the AIADMK underlined the fact that the Sasikala family cannot be left out of any political equation that emerges in the AIADMK. After Sasikala’s imprisonment Dhinakaran’s attempt to become an MLA and take control of the state government got nixed and he too got arrested for ‘attempting’ to bribe an EC official. Clearly Delhi wanted to keep the discredited Mannargudi family away from the levers of power and the way it blessed the revolt of both OPS and EPS were clear pointers.

The EPS faction’s decision to cut out Dhinakaran from the power structure also came at the behest of Delhi to satisfy an important condition of the OPS faction to merge. Even after this move when OPS demurred, he was summoned by Modi and asked to speed up the merger. “Only a united AIADMK can ensure stability and governance which is not only important for the 2019 elections but also to deny any advantage to the DMK and Congress. All this infighting has affected governance and there is an urgent need to repair the image of the EPS government,” said a senior state BJP leader.

The air of instability has brought governance in the state to a virtual standstill. The way the EPS government has bumbled its way to get an exemption for state students from NEET for medical admissions was ample proof of the confusion in the corridors of power. After its attempt to carve a separate quota for state board students failed to cross the legal hurdle it required multiple trips to Delhi by the state health minister and the negotiating skills of Union Industries Minister Nirmala Sitaraman to get the Centre to agree to a one time exemption from NEET this year alone. If students who have high NEET scores successfully challenge this exemption, the EPS government could end up with egg on its face – again.

“The present state government is paying the price for its duplicity in misleading students by promising them exemption from NEET when the Supreme Court had ruled out any further concessions after last year. Rather than concentrate on improving school education and enabling its students to compete in all India exams, Tamil Nadu’s political parties want them to wallow in mediocrity by such concessions. Even this one time exemption for NEET is a sop that would fail the legal test,” warned Dr. Sumanth Raman.

Thankfully for the EPS government its existence has not been threatened by two factors – the reluctance of any ruling party MLA to face fresh elections with more than three years of Assembly term remaining and the inability of the opposition DMK to exploit the present crisis within the ruling party. The DMK under Stalin has been bereft of any ideas that could destabilize the present regime. “The truth is even DMK MLAs do not want a midterm election as not many are sure about winning again,” admitted a senior DMK MLA. “The status quo suits both the sides.”

Even if they make peace and merge, EPS and OPS will have to contend with Dhinakaran who would fight to keep his family politically relevant. The AIADMK is so used to this family calling the shots that it is difficult for many to break free and accept a new leadership. Dhinakaran would love an arrangement in which he, EPS and OPS can find their respective space. “He would like at least a toe hold which he can exploit at a later stage. On the other hand EPS and OPS do not want the family to cast even the slightest shadow on party affairs. So it is going to be a long drawn battle till someone establishes absolute control,” said a senior Minister of the EPS government.