Her brother is now undergoing final training with a commercial airline in Gurugram. He will soon fly a plane. 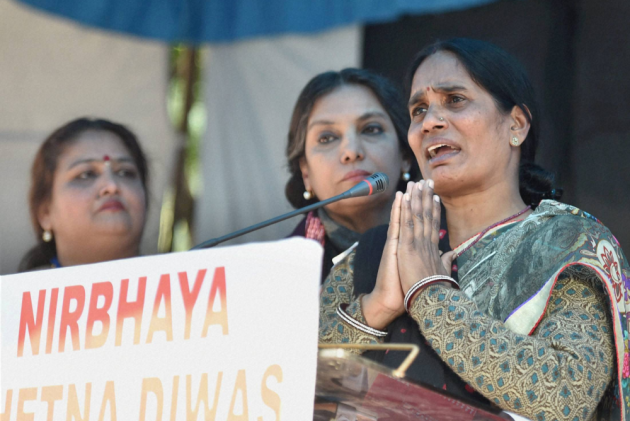 The mother of Nirbhaya, who was brutally gangraped and killed on a moving bus in Delhi on December 16, 2012 that shook the entire nation, has thanked Congress vice-president Rahul Gandhi for helping her son become a pilot.
"Aman (name changed) is a pilot now because of Rahul Gandhi," said Asha Devi told Mail Today.
Asha also told the tabloid that apart from sponsoring Aman’s higher education, Rahul's regular phone calls motivated him to achieve what he wanted.
Six men had assaulted the 23-year-old paramedic student, and a male friend in a moving bus as it drove through the streets of New Delhi. She was thrown out of the bus -- so grievously injured that her insides were spilling out -- along with her male friend near the airport. A fortnight later, on December 29, 2012, she succumbed in a Singapore hospital.
The brother, who was 19 years old and a Class 12 student when his sister succumbed to grievous injuries inflicted by her rapists in 2012, completed his training from the Indira Gandhi Rashtriya Uran Akademi (IGRUA), in Rai Bareli, Uttar Pradesh, reported Sunday Guardian.
"Rahul Gandhi was the one who counselled him and motivated Aman, elder of the two brothers of Nirbhaya, to achieve something good in life to support the family. After learning that he wanted to join the defence forces, Rahul asked him to pursue a pilot's training course after completion of school," Asha told Mail Today.
While Aman was seen in court during the trials, the youngest son of the family has been kept away from the media glare. The eldest son was in the limelight for expressing his anger—he tried to start a fight with the juvenile accused in court. Pertaining to the Juvenile Justice Act (JJ Act), the juvenile charged in the case had been sentenced to only three years of imprisonment, which was deemed too less for committing such a heinous crime, reported Sunday Guardian.
Asha told Mail Today that during Aman’s 18-month pilot's training course, he used to get regular updates about the Nirbhaya trial. "When he was studying, Rahul used to talk to him over the phone and taught him to adopt a 'never quit' attitude." she added.
Aman is now undergoing final training with a commercial airline in Gurugram. He will soon fly a plane.
Asha also said Rahul's sister Priyanka also calls them over the phone.
"She often asks about our health," she said.
On Wednesday, the Delhi Commission For Women (DCW) has asked Tihar jail authorities and deputy commissioner of police of south district to explain why the four convicts have not been hanged despite the Supreme Court upholding their death sentence.
The four convicts lodged in Tihar jail are Mukesh (29), Pawan (22), Vinay Sharma (23) and Akshay Kumar Singh (31). A fifth accused, Ram Singh, allegedly committed suicide in Tihar Jail in March in 2013 and the sixth, a convicted juvenile, was sentenced three years of punishment in a reform home and released in 2015.
The parents of the deceased have complained to the women's panel that even after six months of the Supreme Court upholding the death sentence for the four convicts, who had brutally raped and killed their daughter, they have not yet been hanged.
(With PTI inputs)