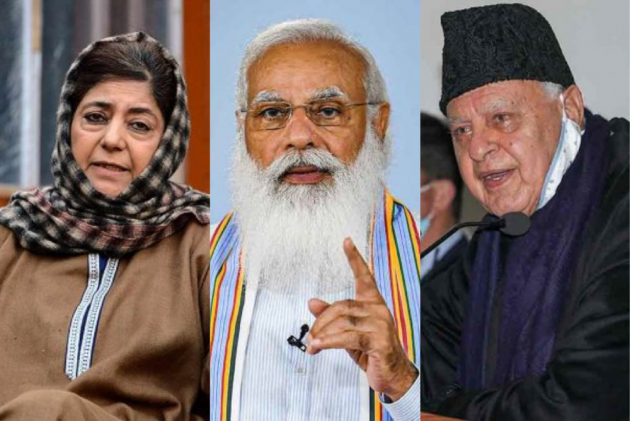 Call me naive, but I must say I am struggling to get my head around the stunning somersault our central government has done on Kashmir. Having locked up most of Kashmir’s mainstream leaders for months, the Centre is hosting the same lot for high-level talks today in New Delhi. Make no mistake—the Centre’s move for consultation is welcome. For that matter, it has been long overdue. Strong-arm measures as a matter of state policy must not have a place in any true democracy, and the sooner our rulers understood this principle the better. But what is still baffling is the swiftness with which the Central government has had a change of heart. Having spent months and years demonising Kashmiri leaders such as Omar Abdullah and Mehbooba Mufti, the government has reached out to the same ‘demonised’ leaders in a bid to chart a new course in the troubled region.

The change of strategy may not be enough to erase the distrust that has accumulated, particularly since the abrogation of Article 370—that resulted in J&K losing its special status—and the downgrading of the state into a Union territory. Some 200 mainstream leaders were locked up. Military boots on the ground managed to keep the peace, while a bureaucracy that took orders only from Delhi ran the administration. With leaders jailed, first under the criminal procedure code and then under a draconian public safety act first brought in by Sheikh Abdullah during his tenure in the 1970s to target timber smugglers, people found no representation in the manner they were ruled. That the leaders were subsequently released did little to reverse their fortunes. Their ostracisation continued, and when Mehbooba—a former chief minister who ruled the state in alliance with the BJP months before Article 370 was removed—sought to renew her passport, her request was rejected. She was deemed shockingly to be a threat to the State.

The talks to be held today are testimony that political rivals—no matter the deep disagreements they harbour—cannot be done away with contempt. Out of jail, many of the Kashmiri leaders coalesced under an umbrella—the People’s Alliance for Gupkar Declaration (PAGD) —but this formation too was derisively dismissed out of hand as the “Gupkar Gang”. And someone at the very top in the chain of command uncharitably wished them away as stooges of foreign powers out to diminish India.

Though lustily cheered and the cause of much chest-thumping, developments in Kashmir after August 5, 2019, have shed light on the limitations of heavy-handed measures. For the record, the abrogation of Article 370 carried out in stealth and with the precision of a “surgical strike” was remarkably smooth. Kashmiris were not really allowed to voice their opinion. When they did, they were quickly silenced, with the region put under stringent security restrictions and an internet ban. But has peace really been secured? The jury is out in the absence of Kashmiri voices being adequately heard.

Instead, the signs spotted in the interim have not been comforting. Boasting of a brute majority in Parliament, the BJP sought to foist on the region a political outfit of its choice by poaching leaders from mainstream Kashmiri parties. Thus formed, Apni Party was expected to represent Kashmiri aspirations. Kashmiris did not repose their faith in such a formation, though. In the District Development Council elections last November, the party won just 12 of the 280 seats. In contrast, the PAGD—the coalition of mainstream parties—won 110 against the BJP’s 75.

The elected DDCs have their own set of problems, with elected members saying they have been reduced to glorified ‘sarpanches’ with the mighty bureaucracy caring little for them. But the larger message to be derived is that the Centre’s crafted policy hasn’t really found resonance among those who matter the most: the Kashmiris. Thankfully, a realisation has now dawned on those who matter and the Centre’s move to host the talks with leaders they sought to discredit is proof of that. More importantly, the larger message that one can draw is that consultations are way better than coercion in a democratic polity.

No matter how embarrassing it could be for the Centre to reach out to those they rejected in the first place, its outreach—however belated—is to be wholeheartedly welcomed. This should also benefit the government accused of shutting down dissent. From Bhima Koregaon to Delhi riots, recent times have been replete with instances of a belligerent government coming down disproportionately hard on those who differ with it. One is not certain what exactly will come out of the Kashmir talks. But if the changed strategy marks the beginning of a course correction by the government, that’s not a bad start after all.