Besides Hizb threats, the separatist leadership has also called for a boycott of the upcoming elections 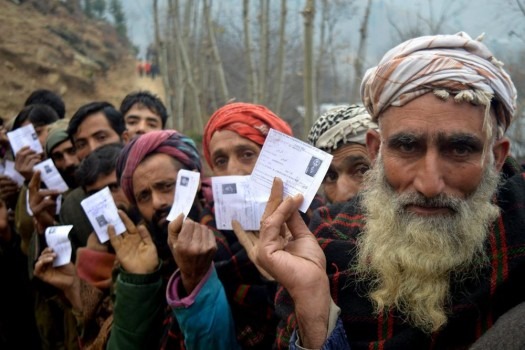 Militant group Hizbul Mujahideen has reportedly threatened to pour acid into the eyes of people who would participate in the panchayat elections in Jammu and Kashmir, which is rescheduled to February 18 from last year due to protests over killing of militant Burhan Wani.

According to The Hindustan Times report, the threat was mentioned in an audio clip, said to be a 'leaked conversation' between Hizb's Operational Commander Riyaz nikoo and militant leader Sameer Tiger, circulating on social media.

The duo is heard talking about "futility" of killing the voters and that the threats are not helping much either.

"You saw in 2016 how many youth lost their eye sights (to pellets). That is why we have planned …whosoever fights elections, he will be dragged out of his home and concentrated acid –sulphuric or hydrochloric acid – will be poured into his eyes so that he loses his eyesight and becomes a burden for his families for life," the paper quoted from leaked conversation.

The militant commander was also heard threatening the local leaders who push the people to fight elections and come out on the voting day.

Besides Hizb threats, the separatist leadership has also called for a boycott of the upcoming elections, the newspaper further added.

The last panchayat election was held in the year 2011 with a record turnout of 80% voters. The panchayat elections were due in the Valley last year, but could not be held due to the troubled atmosphere following the killing of Hizbul Mujahideen commander Burhan Wani on July 8, 2016. The incident had sparked violent protests, resulting in the killing of over 86 persons.

The militant outfit, for the first time, was also heard acceptig that it did kill people previously who had participated in the elections. However, this time, it said it is not going to resort to killing.