India's Internet Has A Caste System. Welcome The 'Bultoo Class' And Their 'Voicebook'

This new radio is democratic. People walk to a place where mobile signal is available to record their songs and messages to a server 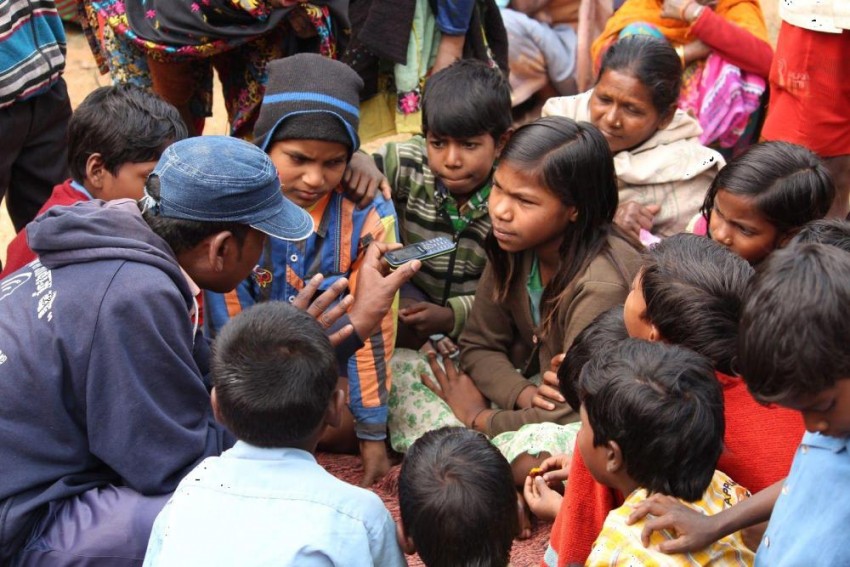 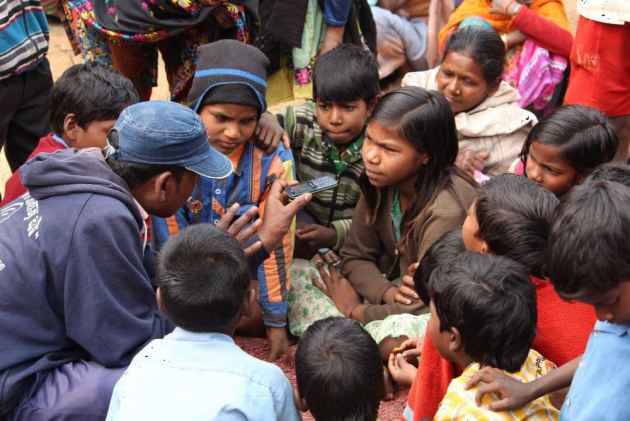 Facebook is great tool. It has positively transformed millions of lives. But developing world countries like India probably needs something called ‘Voicebook’ more than Facebook. For example, in India, Facebook has 140 million subscribers. That is around 10 percent of India’s population of around 1.3 billion.

Facebook is a modern marketplace where people talk, exchange ideas and also goods. A majority of today’s world are excluded from this modern facility though.

They have their own marketplaces but they are limited in nature. Can we create ‘Voicebook’ for them?

A small effort to this effect is taking place in Central India. It can also help transform journalism from an aristocratic exercise, which it is today, but can convert itself into a democratic one. Facebook is called ‘social media’ but how can a place be called social when 90 percent of the population are not on it?

Similarly, media is responsible communication. Anybody talking anything without any cross-checking should not be called media. But It can be made a responsible democratic platform if we include elected gatekeeping from the community. We should also demand that if Facebook and Google are called media then they need to be responsible platforms.

According to a recent study 1 percent of India controls around 60 percent of the economy, a reflection of the economic inequality in most developing countries. So it is quite obvious that companies like Facebook and Google are not interested in investing in ideas like Voicebook which will connect people at the Base of the Pyramid, who own a very small part of the economy.

In the world of mass communication today’s Indian society can be divided in three castes.

The creamy layer of Indians who have access to internet can be labeled the ‘Internet caste’. There are varying estimates for the size of this class. When Facebook says they have 14 crore subscribers then we can safely say that this caste is around 10% of our population. Second is the ‘mobile phone class’, who own a phone, have access to phone signals and have some extra cash to make phone calls. This is the biggest class who could be between 60 to 80 percent of our population though the numbers are smaller in rural areas. People from this caste are often in a hurry to join the internet caste. Caste is not hereditary here.

Finally, coming third is the ‘Bultoo caste’. Some from this community own phones but they don’t have access to mobile signals at places where they live and often do not have money to make a phone call. They are at least 20-30 percent of our population and could be more in number in the villages.

This caste was earlier categorised as the ‘radio caste’, which had no voice of its own; they could only listen. They often shared the same phone among themselves and used the instrument mainly as a tool to listen to songs and take pictures. They use Bluetooth technology available in their phones to transfer audio files among one another.

They cannot pronounce Bluetooth, so they call it ‘Bultoo’. 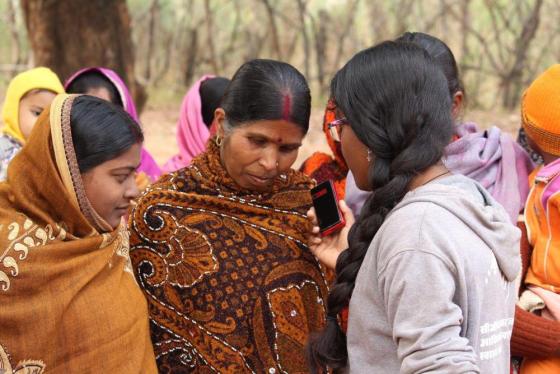 India has killed radio, legally. Though we are the world’s largest democracy we don’t allow public use of radio. India, a nation of 1.3 billion people has only one radio station who can do the news. It does not broadcast anything in most of the dialects spoken in remote areas.

People from the earlier ‘radio caste’ tell me: “We do not listen to radio any more. It does not speak in our language and talks of some Obama and Osama whom we do not understand. It hardly talks of anything which is related to our lives. Radio is dead for us”. 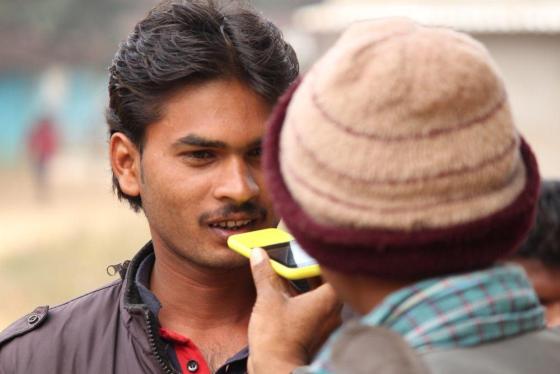 So they use ‘Bultoo’ a lot now. Bluetooth is the most used communication tool in the remote areas of India today. Even small children know how to transfer music files from one phone to another. If you go to any remote village in India today you will find at least half a dozen mobiles. They often do not have mobile signals in their villages so they can’t make a phone call. The mobile phone is the new tape recorder and the new camera which helps to listen to songs and take pictures. When they go to the market, apart from buying and selling they also visit a ‘download center’ and buy some songs which they later share with each other using Bluetooth, free of cost.

An experiment for democratic media in Central India is using this pattern to develop ‘Bultoo radio’ or ‘Voicebook’ to complement normal radio in remote areas. This new radio is democratic. People walk to a place where mobile signal is available to record their songs and messages to a server (computer connected with internet and a phone with Interactive Voice recorder software). A trained team of editors from the same community puts together a radio program from the same songs and messages in their own languages on their computers sitting wherever they can lay their hands on the internet. Once the program is ready it can be downloaded by calling the same server number. If the person has an internet connection, which is rare in remote areas, then they can get the radio program using tools like WhatsApp. If they do not have internet then they download the audio and record it on their feature phones. 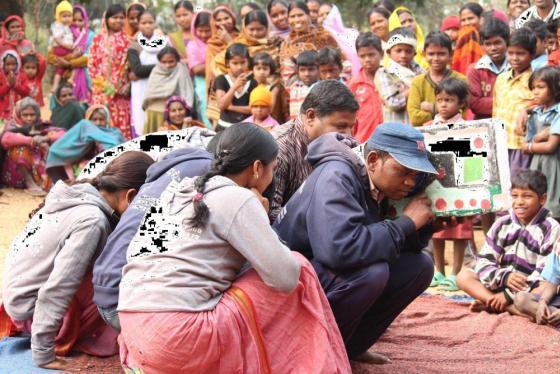 Once the radio is available as an audio file this Community Media Vendor (CMV) goes house to house in her community and delivers ‘Bultoo radio’ to each customer’s phone. The program can be heard and shared as many times as one wants as it often happens. The programs are in local language, by local people and raises local issues. That is it’s USP.

When the CMV delivers Bultoo radio she also collects some goods which the customer wants to sell to urban markets. Because they are not connected with phones, people from the Bultoo caste were selling the same goods in local markets at a lesser price than before. CMV adjusts the cost of Bultoo radio in the price for the collected goods. Collected goods are often organic agriculture products or forest produce which has demand in urban markets. Sometimes they can also be arts and other such rural artifacts. This business now helps the communication platform which helped the business itself to start at the first place. Earlier there was no supply chain for the goods due to lack of communication.

The producer of news in this system is not paid for the news production. The communication platform needs to be dependent on the economy of the same people for which it operates as much as possible, so that it remains independent.

When one has a critical mass of Bultoo radio stations which are also called VoiceBooks then one can do data journalism on top to see ‘trending’ news. This can be the basis for representative news unlike the current aristocratic model of mainstream media. This will be representative unlike the internet based social media which reaches a small minority. Unlike Facebook, which is like a marketplace where anyone can say anything, this communication platform can be monitored by elected representatives (called Jodkars) from the community to make it a platform for responsible Journalism.

It is an experiment which shows that the Internet, mobile phones and Bultoo can together create a free media.

Telangana Baba Dreams Of Underground Shiva Linga, Digs Up National Highway Along With Sarpanch And Villagers