Replying to a debate on the amendment to the anti-terror law, Home Minister Amit Shah said a four-level scrutiny has been provided in the amendment and no human rights will be violated. 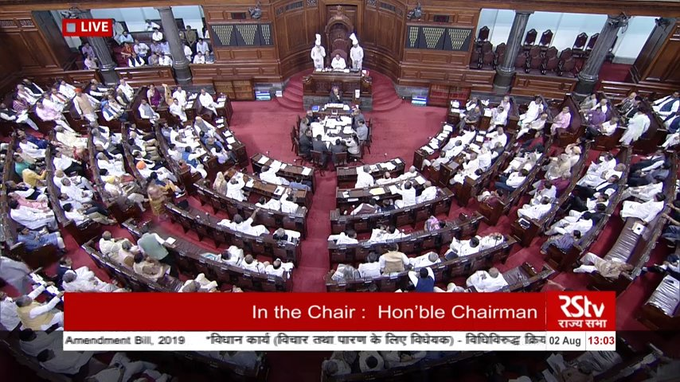 The Parliament on Friday approved an amendment to the anti-terror law to give powers to the central government to designate an individual as terrorist and seize his properties.

The House passed the amendment to the law with 147 votes in favour and 42 against it.

Rajya Sabha also rejected the opposition-sponsored motion to send the amendment to select committee with 104 votes against it as compared to 85 in favour.

Replying to a debate on the amendment, Home Minister Amit Shah said a four-level scrutiny has been provided in the amendment and no human rights will be violated.

He said the law, that will be used only to tackle terror, will help agencies remain four steps ahead of terrorists.

He said declaring individuals as terrorists is required as they float different organisations once an institution is banned. Individuals can be declared terrorists if they commit or participate in acts of terrorism, prepare or promote terror, he said. The amendment will expedite prosecution in terror cases, he said.

Terrorism has no religion, terrorists are against humanity, individuals of one religion must not be victimised, Shah said asking support of all parties to support stringent laws against terrorism. He further assured the House that Government is committed to protect the fundamental rights of all citizens.

Responding to opposition concerns of the law being misused, he said no one's human rights will be violated as a four-stage scrutiny with provision for appeal has been prescribed when individuals are declared terrorists.

Elaborating on the track record of the National Investigation Agency (NIA), he said out of 278 terror cases registered by the agency, charge sheet has been filed in 204 cases. Of the 54 cases where judgements have come, conviction has been there in 48.

Track record of NIA in conviction in terror cases is outstanding, he said.

Also Read | Numbers Win The Battle Of The Bills

The Left Parties, on the other hand, accused the Congress of "betraying" the people of the country and having "lost" its vision. They hit out at the grand old party for supporting the government on the Unlawful Activities (Prevention) Amendment (UAPA) Bill.

Communist Party of India (CPI) general secretary D Raja said, "It is a new situation. A right-wing, fascist party has captured power. There are increased attacks on democratic and constitutional rights, people do not feel secure and mob lynchings have become the order of the day. In this situation, how can the Congress party side with such a draconian law?" he asked.

'My Phone Keeps Ringing All Night': Meet Delhi Man Who Is Mistaken For Sunny Leone