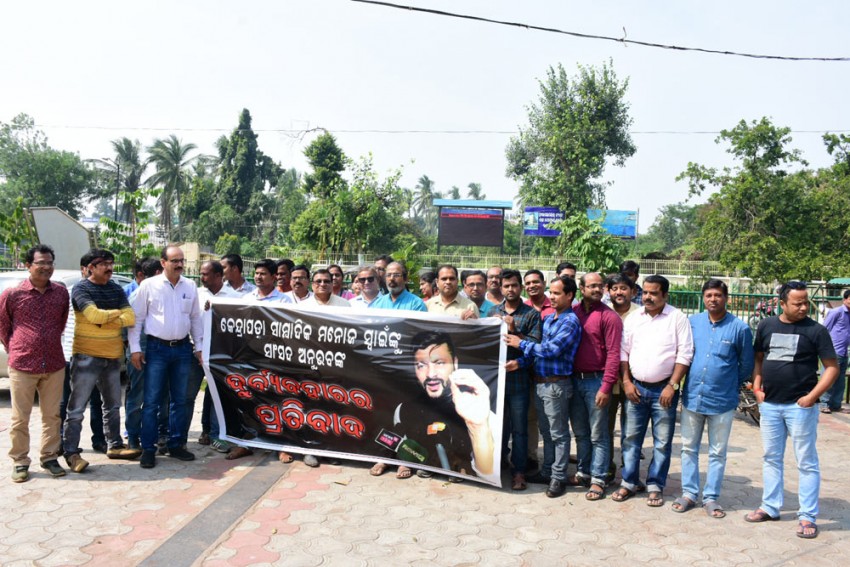 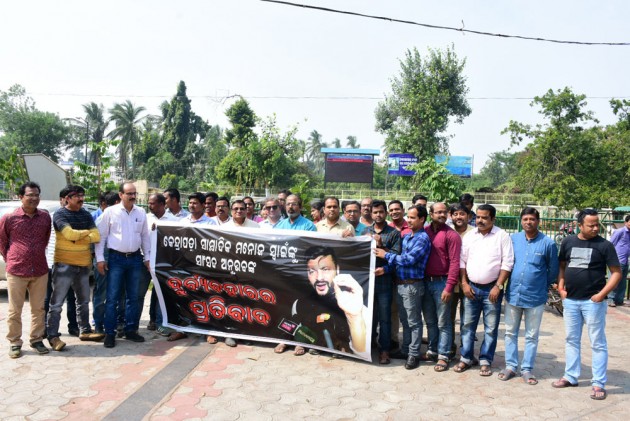 Riven for long by their petty differences, journalists in Bhubaneswar cutting across media houses gathered in large numbers on Thursday to protest against the boorish behavior of Kendrapara MP Anubhav Mohanty with the reporter of a leading TV channel of the state on Tuesday. They shouted slogans against the public humiliation of a journalist on duty by the MP and later submitted a memorandum addressed to Chief Minister Naveen Patnaik through the Home secretary demanding, among other things, a public apology by the MP within 24 hours and the tabling of a bill guaranteeing the safety of journalists in the state during the upcoming session of the state Assembly.

Reports are also coming in from across the state about journalists' unions and associations protesting and condemning the MP’s act. Old timers say they had not seen such a show of unity in the Odisha media fraternity before.

Anubhav had taunted Manoj Swain, the Kendrapara reporter of OTV, a leading TV channel in Odisha, and humiliated him by dragging him in front of the camera by his shoulder to ‘show’ his face. He also started a sarcastic round of clapping, faithfully joined in by his followers, to complete the shaming of the journalist. The uncivil conduct by the people’s representative, Outlook has learnt, came without any provocation whatsoever.

The latest incident comes on the back of a series of such incidents over the last year or so where ruling party leaders and even government officials, including police officers, have misbehaved with journalists on duty. In the run up to the Hockey World Cup last year, a senior government officer had brushed aside the boom of a reporter and humiliated him in front of his colleagues by asking him to leave the room immediately, again without any provocation on the part of the journalist. About two months ago, a reporter of News 18 on duty was manhandled by the Kendrapara SP for no apparent reason.

The incident in Kendrapara was not a one off affair for the Kendrapara MP who, of late, has developed this uncanny knack of being in the news for all the wrong reasons, especially after he won the last Lok Sabha election from Kendrapara, defeating two-time former MP from the constituency Jay Panda of the BJP by about 1.5 lakh votes. In July this year, a lady journalist in Cuttack had filed a police complaint accusing the MP of misbehaving with her. She also met top police officers to press the demand for action on her FIR. A few weeks later, Manjit Das, a neighbor of Anubhav in Cuttack, accused him of scolding, assaulting and spitting on him during an argument over parking space. Not surprisingly, no action has been taken by the police on either of the two cases. It now remains to be seen if the FIR lodged by the publicly humiliated journalist at the Kendrapara police station fares any better after the collective protest by journalists on Thursday.

Other elected legislators of the ruling party have not been far behind when it comes to behaving boorishly in public. Weeks before the last elections, BJD MLA Ayub Khan shoved aside a frail, old woman who had come with some grievance and gave her a thorough tongue-lashing for her ‘crime’ of not voting for the ruling party. Then, weeks after the elections, another BJD MLA, Saroj Meher of Patnagarh, had forced an engineer to do 100 sit-ups in full public view.

Ironically, all these incidents of dismeanour have been committed by elected representatives of a party whose chief has been an epitome of decency and gentlemanly conduct in public. After the unprecedented fifth successive win for the party last April-May, BJD supremo Naveen Patnaik had summoned all elected members and advised them to be civil and courteous in their dealings with the people. But the message has clearly not gone down to the legislators.

'If MEA Doesn't Respond, I Will Go To Pakistan On Eligible Visa': Sidhu On Kartarpur Row