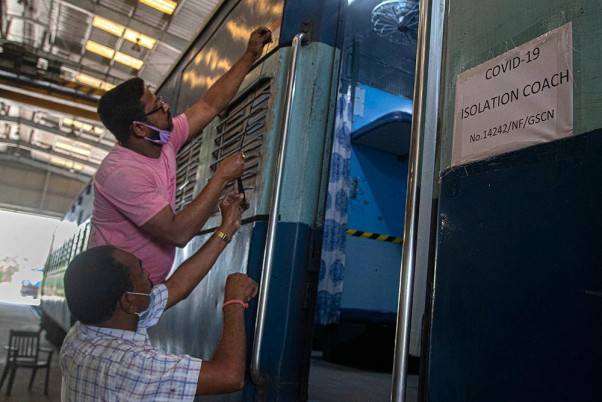 The Railway Board has instructed zonal railways that they might be required to convert up to 20,000 coaches into isolation wards as part of its preparedness to fight the coronavirus outbreak.

In a letter to all the zonal general managers on Monday, the board has said that initially 5,000 coaches will be converted.

It also said that the railways has held consultations with Armed Forces Medical Services, medical departments of various zonal railways, and Ayushman Bharat before taking the decision.

Five zonal railways have already prepared prototypes for the same, it said.

"...As part of COVID-19 preparedness, it was advised in the video conference held on March 25 that a few rakes may be converted into quarantine/isolation coaches in consultation with the medical department, so as to augment the quarantine facilities being created. In this connection consultations were held with Armed Forces Medical Services, Medical Department of various zonal Railways, and Ayushman Bharat.

The letter also detailed the specifications of such isolation wards.

It said that one Indian style toilet to be converted into a bathing room which can be done by placing wooden batten structure/ chequered sheet on the entire lavatory floor which also covers the squatting pan and does not create any level difference on the floor.

It is to be equipped with bucket, mug and soap dispenser also. Taps with lift type handle will need to be provided in washbasins, it said.

"The first cabin near the bathing room shall be provided with two hospital/plastic curtains transversely in the aisle so that the entry and exit to the entire eight berth cabin can be screened off. This cabin will be used as a store/paramedics area.

"Two oxygen cylinders will also be provided by the medical department for which suitable clamping arrangement on the side berth side of this cabin may be provided. Both middle berths to be removed in each cabin and extra bottle holders shall be provided in each cabin for holding medical equipment, two for each berth," it said.

It also said that extra three peg coat hooks, two per cabin, is to be provided, along with mosquito net on windows.

Each cabin will be provided with three dustbins with foot operated lids of red, blue and yellow colour suitably lined with garbage bags.

"For insulation of the coaches, bamboo/khus mats may be affixed/pasted on roof and each side of coach above and below windows to shield effect of heat inside coach. All charging points for laptop and mobile to be functional. It must be ensured that all amenity fittings are in place, upholstery is in good condition and broken panels etc. are replaced,” it said.

It also said that the Director General Railway Health Services will issue detailed standard operating procedure for operation and use of these quarantine/isolation coaches/trains.

According to the Union Health Ministry, 92 new cases and four deaths due to coronavirus have been reported in India since Sunday, taking total cases to 1,071 and the number of deaths to 29.