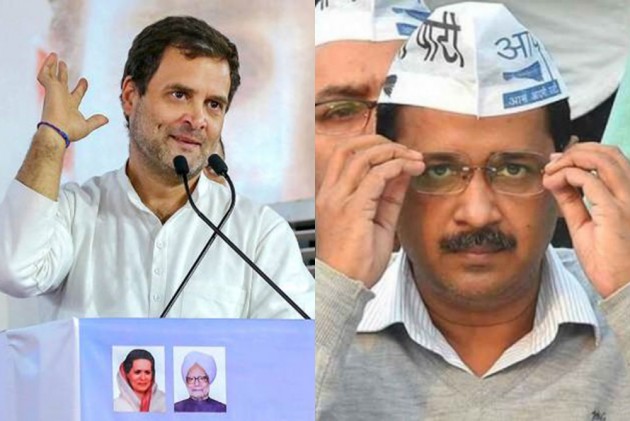 With just a day left before the process of filing nominations for candidature from the seven Lok Sabha seats of Delhi begins, there is still no end to the uncertainty on whether or not the Congress party and Arvind Kejriwal’s Aam Aadmi Party will seal a pre-poll alliance.

In a first, Congress president Rahul Gandhi took to Twitter, on Monday, to negotiate a pre-poll alliance with AAP. The offer of four out of Delhi seven seats for AAP came days after PC Chacko, Congress in-charge of party affairs in the city-state, declared that the pre-poll alliance talks had failed.

“An alliance between the Congress & AAP in Delhi would mean the rout of the BJP. The Congress is willing to give up 4 Delhi seats to the AAP to ensure this. But, Mr Kejriwal has done yet another U turn! Our doors are still open, but the clock is running out,” Rahul said in a tweet. The Congress president’s statement was in response to Kejriwal and AAP declaring over the past few days that they were going solo in the upcoming polls.

An alliance between the Congress & AAP in Delhi would mean the rout of the BJP. The Congress is willing to give up 4 Delhi seats to the AAP to ensure this.

But, Mr Kejriwal has done yet another U turn!

Our doors are still open, but the clock is running out. #AbAAPkiBaari

The Delhi chief minister, however, did not take kindly to Rahul’s personal jibe at him and indicated in a tweet that the Congress president had made the comment while the negotiations were still on.

“What U-Turn? The talks were still on. Your tweet shows that having an alliance is not your wish. I am saddened by your comment. Today it is important to save the country from the threat of Modi-Shah. It is unfortunate that in UP and other states you are helping Modi by splitting the anti-Modi vote,” Kejriwal tweeted in response to Rahul’s statement.

With exactly a month left before polling for Delhi’s seven parliamentary seats – scheduled for May 12, the sixth of the seven-phase Lok Sabha elections – the Congress and AAP have little time left to finalise an alliance. And the comments by the two party chiefs indicate that things may have reached a point of no return.

Congress leaders, however, said that the party was still hopeful of an alliance. Chacko told Outlook that the party is willing to “give one last shot at negotiating an alliance with AAP” but conceded that time was running out. “The process of filing nominations will begin tomorrow so that I think is our outer limit for waiting. If we don’t get a positive response from AAP, we will have no option but to declare our candidates for all seven seats. We are prepared to contest all seats but we would want an alliance and we have conveyed to AAP that we will settle for three seats and they can field candidates on the remaining four,” Chacko added.

The AAP had already declared its candidates on all the seats last month. If the Congress-AAP alliance does happen, Kejriwal will have to ask three of his candidates to step down and arrest the heartburn that this may cause. The BJP, meanwhile, seems prepared to wait for a final word on its Opposition’s alliance in Delhi as it hasn’t declared its candidates for the seven Lok Sabha seats yet. In 2014, the BJP had won all seven seats of the national capital with AAP finishing second and the Congress third.

“If you look at the 2014 results, the combined vote share of AAP and Congress was of over 50 per cent. If we come together, we are certain to sweep Delhi,” Chacko said. Asked whether the two prospective alliance partners who have spent the past three years publicly criticizing each other will succeed in transferring their votes to each other in the event of an alliance, Chacko said: “I think we can transfer our votes to AAP and I don’t see any reason why they won’t do that too. Yes, may be 10 per cent of the votes may not transfer, but we have factored that in and are still confident that minus these votes too we will win.”

A senior Delhi Congress leader said that a new round of backchannel talks with Kejriwal’s interlocutor and AAP’s Rajya Sabha MP, Sanjay Singh, began early Monday. “Rahul Gandhi had asked the Delhi Congress leaders and Chacko to revisit the possibility of an alliance with AAP and the process has started again,” the leader said, but added that the party’s central election committee may meet on Monday night or on Tuesday to finalise candidates for Delhi. “If the alliance happens, we will name three candidates, if it doesn’t then we’ll name all seven. Either way, we can’t wait endlessly and will declare our nominees by Tuesday evening,” he said.

With Rahul and Kejriwal sparring on Twitter and blaming each other for the breakdown in alliance talks, leaders from both parties admitted that it would possibly better for Congress and AAP to not have an alliance now. “After such name-calling from both sides, how will we suddenly project a face of unity to the electorate with less than a month before polling. The BJP will have a field day criticizing us for a tie-up and Narendra Modi will get an upper hand by playing the victim and screaming before the voters that AAP and Congress are uniting only to keep Modi away,” a senior Congress leader told Outlook.

Echoing similar views, an AAP leader said that it would be “better to not have a formal alliance and explore a backchannel understanding on seats where the Congress thinks it has better candidates than ours… a lot of time has already been lost.”