Home  »  Website  »  National  »  Quarantine Yourself If 'Vacation' Over: 'Truant' Tejashwi Yadav Told On Return To Bihar

Quarantine Yourself If 'Vacation' Over: 'Truant' Tejashwi Yadav Told On Return To Bihar

RJD sources claim that Tejashwi Yadav was in Delhi since the lockdown began and returned to Bihar by road on Monday night after obtaining a special permission from the local administration. 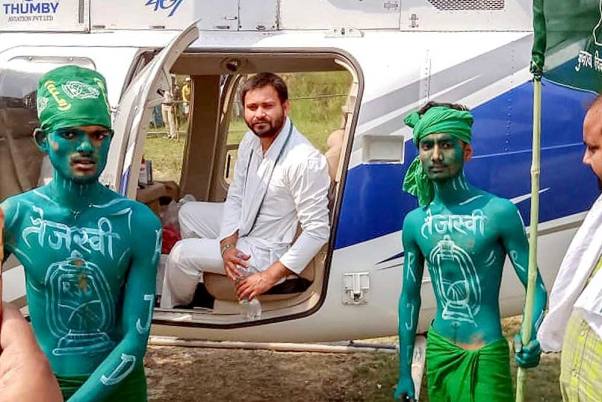 With controversies mounting by the day over whether he has been a bhagoda (truant) or a sahara (support) to Bihar during the ongoing lockdown, Rashtriya Janata Dal (RJD) leader Tejashwi Prasad Yadav has returned to Patna after more than 50 days, prompting the ruling coalition leaders to ask him to undergo the mandatory 21-day quarantine at a government-run centre. It will help him spend time with the migrants and also get the real picture of those centres, suggest his opponents.

Tejashwi has lately been highly critical of the Nitish Kumar government’s handling of the situation, especially the migrant issue, during the nationwide lockdown enforced by the Centre following the outbreak of the Coronavirus pandemic. Among other things, the leader of the Opposition in the state assembly has alleged that the migrants who have returned from other states have been left to fend for themselves by the NDA government. He has also averred that the quarantine centres are in absolute mess across the state.

Tejashwi, the youngest son of incarcerated RJD president Lalu Prasad Yadav, returned to his home town earlier this week from an undisclosed location, where he was apparently stranded due to sudden announcement of the lockdown. RJD sources claim that he was in Delhi during this period and had returned by road on Monday night after obtaining a special permission from the local administration.

But the ruling JD(U)-BJP leaders want to know where exactly was he “vacationing” during this period? Neeraj Kumar, minister for information and public relations department in the Nitish cabinet, says that nobody knows where he was 'hiding' until now. “He will have to reveal whether he was in a red zone? Coronavirus is contagious and he, therefore, needs to undergo a test.”

The minister says since the RJD leader had been hitting out at the state government over the facilities at its quarantine centres, he should go and stay there for some time to see for himself as to what kind of arrangements have been made there.

Other leaders of the ruling coalition have also been pressing for the need for the 30-year-old former deputy chief minister to follow the norms of 21-day quarantine, which is mandatory for all the people coming from outside the state. Being the leader of the Opposition, he cannot afford to bypass the rules since he has returned from outside the state, they contend.

The NDA leaders further allege that Tejashwi had chosen to return to Bihar only because #TejashwiBhagodaHai (Tejashwi is a truant) started trending on Twitter the other day. BJP leader Prem Ranjan Patel says that the people of Bihar had declared Tejashwi to a “bhagoda” (truant) on Twitter because of his prolonged absence during a crisis period forcing him to return now. Tejashwi’s supporters, however, countered the allegations by making #TejashwiSaharaHai (Tejashwi is a support) trend on the micro-blogging site too. Accusing the NDA leaders of doing petty politics during the Coronavirus crisis, RJD leaders say that Tejashwi had been forced to stay away from Bihar because of the lockdown restrictions. Elder brother Tej Pratap Yadav has also defended him saying that Tejashwi got stranded because he had no premonition about the lockdown.

Also Read | 'People From Bihar Are Stuck And CM Is...': Prashant Kishor's Swipe At Nitish Kumar

An undeterred Tejashwi, on his return, has intensified his attack on the Centre and the state government. Hitting out at Prime Minister Narendra Modi’s economic package of Rs 20 lakh-crore announced during his televised address to the nation on Tuesday, he tweeted, “A whopping package of Rs 1 lakh 65 thousand crore for Bihar’s development was announced in a dramatic manner way back in 2015. Request Bihar CM Sh. @NitishKumar ji to file a status report or issue a statement on the delivery of that much hyped package after 5 years? Thanks.”

Bihar is slated to go to polls in October-November this year. Speculations are rife whether the election will be held on time due to the pandemic but the stage is already set for the exchange of salvos between the ruling coalition and the opposition ahead of their electoral showdown in the state.