While some argued why Priyanka, one of the strongest challengers. was given a limited role, others found it a reason big enough to galvanise the cadre and turn the tables for the Congress in Uttar Pradesh. 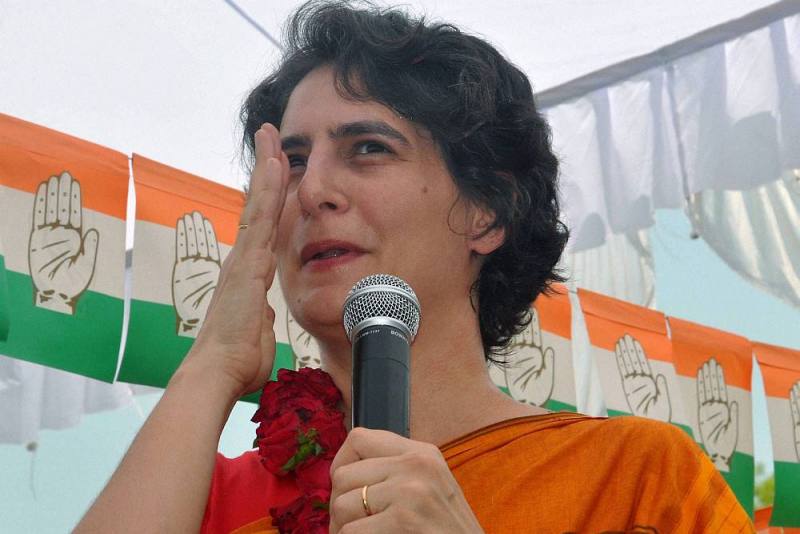 Priyanka Gandhi Vadra during an election campaign for her brother and Congress Vice President Rahul Gandhi in Amethi in 2014
PTI File Photo
Alok Kumar Rai 2019-01-25T18:50:17+05:30 Priyanka's Entry Into Politics To Cause More Damage To SP-BSP Coalition Than BJP

The die is cast. One of the most awaited political events -- formal entry of Priyanka Gandhi Vadra into Indian politics -- has been announced. From the time the Congress announced Priyanka’s active entry into politics, a lot has been said and written about. While some argued why one of the strongest challengers was given a limited role, others found it a reason big enough to galvanise the cadre and turn the tables for the Congress in Uttar Pradesh.

Although the exposure is limited, it may offer specific advantages -- not let Priyanka overshadow his brother and party president Rahul Gandhi, hedge Congress’ first family and herself against future contingencies and gain ground in the most politically significant state of Uttar Pradesh.

There seem to be two parallel electoral battlegrounds for the Congress. The first is to successfully challenge the BJP. Second and equally important challenge is to remain significant among Opposition parties and become a party of choice for non-BJP supporters. This is important for the Congress to lead the Opposition. The Congress, in last six months, has emerged as the first among the lot to speak on issues like Rafale deal, farm crisis and unemployment.

The Congress gained greater acceptance after it was able to defeat the BJP in Rajasthan, Madhya Pradesh and Chhattisgarh elections. It has become increasingly imperative for the Congress to take PM Modi and the BJP head-on to win the perceptual war among non-BJP voters and Opposition parties. Making Priyanka in-charge of eastern Uttar Pradesh, that hosts PM Narendra Modi’s constituency, is seen as a manifestation of bold political move by the Congress. In the run-up to the 2014 elections, Modi’s “Budhiya’ and “Gudiya” jibe sparked criticism. In 2014, Modi had contested from Varanasi and turned around his party’s fortunes. This time, Congress has sent the party’s most popular face to the region hoping for a magic.

Priyanka’s drive may have been aimed at rejuvenation of cadre, bringing back the old core vote base of Muslims, Brahmins and SCs and act as a point of confluence for disgruntled voters. Cadre rejuvenation seems to have been working perfectly well. However, major chunk of SC votes remains largely with the BSP. Media reports about dissonance among Brahmins with the perceived domination of a select few in the governance of the state may come handy for the Congress. Similarly, for disgruntled upper caste voters who did not want to vote for caste- based alliance of SP-BSP, a rejuvenated Congress may be the next resort.

However, under Akhilesh Yadav, the SP got reduced from a party of erstwhile committed OBC voters to a party of committed Yadav voters. SP, though, has been a party of preference among 17-18% Muslims of the state. BSP which could successfully forge an alliance with Brahmins and other non-Yadav OBCs in 2007 also lost its sheen and is left with its core voters of SCs. The single most significant unit of the UP electorate is Muslims among which the “Priyanka effect” could be seen.

BJP has rendered the most vocal criticism of Priyanka’s entry on two grounds – 1) dynasty and 2) projecting it as a failure of Rahul Gandhi. But something that is worth reading between the lines is that the BJP’s stance will make Priyanka and thus the Congress appear as an important player in the state politics. In fact, this can also be seen as the first step towards making the country’s electoral politics bi-partisan thus making regional players insignificant where two national parties would lead two fronts.

For politics to be successful, it essentially has to be socially inclusive. Exclusivity based on caste, religion, region, language etc. has been the premise establishment of regional political parties. If PM Modi has been able to build a loyal set of voters in UP, it needs no rocket science to decode who will be hit the hardest with “Priyanka effect”. It is certainly going to affect non-BJP voters’ party more than the BJP voters. About 18% of Muslim votes along with dismayed voters are the key. What comes to the Congress’ fold amidst all the buzz of “Priyanka effect” at the end remains to unfold.