Renowned Urdu poet Munawwar Rana's two daughters, who were part of the Ghanta Ghar protests, have also been booked. 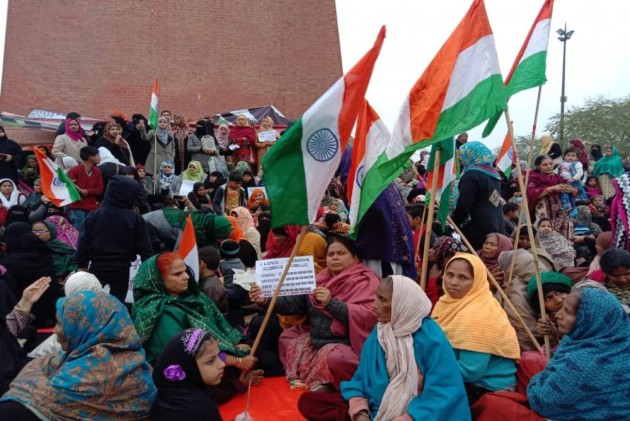 Lucknow Police have booked around 150 women who have been staging a sit-in protest against the Citizenship (Amendment) Act (CAA) at the city’s Ghanta Ghar (Clock Tower) area since January 17.

In three separate FIRs, filed on Saturday and Sunday, at Thakurganj police station, around 150 women and two men were booked under various sections of the Indian Penal Code (IPC), including Section 147(rioting), Section 145 (joining or continuing in unlawful assembly knowing it has been commanded to disperse), Section 188 (disobedience to order duly promulgated by public servant) and Section 283 (danger or obstruction in public way) etc.

The FIR against the poet's daughters, filed by police, says that some women started protesting on January 18 at the Ghanta Ghar location without permission even though Section 144 was imposed there.

"When women police personnel asked the protesters to disperse, Sumaiyya, Fauzia--daughters of Munawwar Rana--and 8-10 other demonstrators pushed them, disrupted peace and asked them to leave," the FIR said.

Protesters, however, say the FIRs are being used a fear tactic to stop the protest even as they continued their sit-in for the fifth day on Tuesday at Lucknow's Ghanta Ghar against the CAA, National Register of Citizens (NRC) and National Population Register (NPR).

"Police have named 18-20 people and rest are unknown. They have not informed the protesters about this. But the police will look at video footages to identify people. This is all part of their plan as Home Minister Amit Shah is coming to Lucknow today," Zainab, who has been part of the protest, told Outlook.

Also Read | Protest As Much As You Want, But CAA Won't Be Withdrawn: Amit Shah

In another FIR, two persons, Laik Hasan and Nasreen Javed have been accused of disobeying the order of public servants and trying to disturb public tranquillity or create fear in public under IPC 188 and 505 (2) respectively.

The FIR, filed on a complaint by Thakurganj resident Kailash Narayan Trivedi, alleges that the duo provoked protesting men and women at the Clock Tower to chant "No CAA, No NRC" and slogans against the State, which scared the public a bit on January 17.

Nasreen, however, says, "The police is putting false charges on us. It was a peaceful protest."

In the third FIR, 18 persons, including two men, have been named along with "100-125" unknown persons and various charges have been levelled against them under IPC sections 147, 145, 188 and 283. The FIR was filed on the complaint of Seth Pal Singh, who lives in Thakurganj, but originally belongs to Haridwar.

The police at the Thakurganj station was not available for comment.

The anti-CAA, women-led protest in Lucknow started on the lines of Delhi's Shaheen Bagh protests after Friday prayers.

The protest started with four women, but it has now grown in size and thousands have come in support, said Zainab. Hundreds of women have been sitting at the clock tower on relay sit-in all day long. The crowd generally start growing in the afternoon and even swell to a thousand by the evening.

"It's not just Muslim women. Hindus and Sikhs have also come to our protest against the CAA," she said, adding that women have taken to the streets since men were "beaten up" in the rallies in December last year.

As many as 19 people have died in the state during clashes between cops and protesters in December last year after the CAA was passed by the Parliament.

Protests have erupted across the country after the enactment of the law, which aims to give citizenship to immigrants who belong to Hindu, Sikh, Buddhist, Jain, Parsi and Christian faiths and have come to India from Pakistan, Afghanistan and Bangladesh.