PM Modi laid the foundation stone for the Ram temple during the Bhoomi Pujan, and took part in pooja and darshan of 'Bhagwan Shree Ramlala Virajman'. 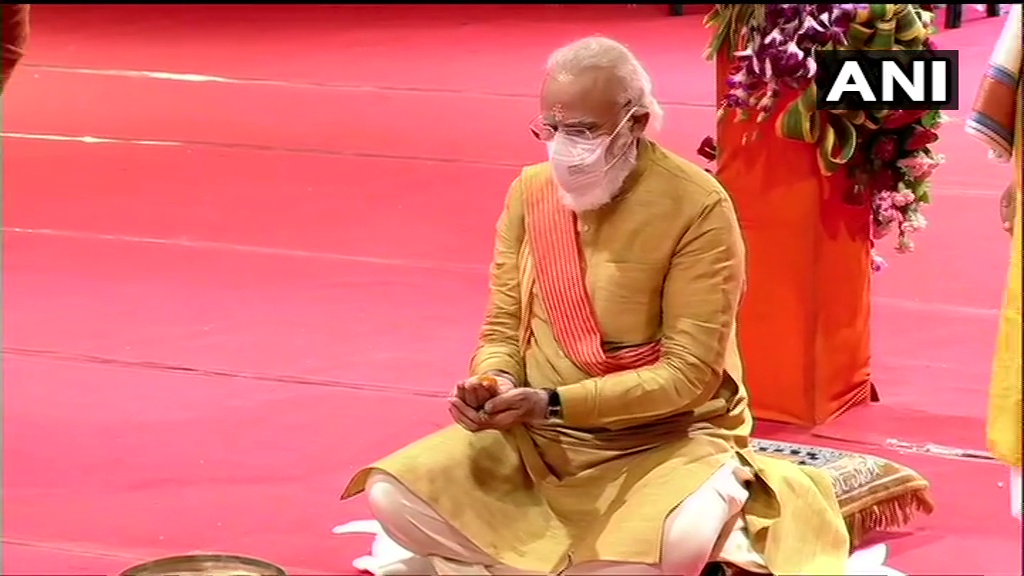 Prime Minister Narendra Modi arrived in Ayodhya Wednesday for the Bhoomi Pujan or groundbreaking ceremony for the Ram temple.

RSS chief Mohan Bhagwat and Uttar Pradesh Chief Minister Yogi Adityanath were among those who attended the event.

As a priest chanted Sanskrit ‘shlokas’ and the ground-breaking ceremony got under way under a giant marquee decorated in shades of reds and yellows, Modi and the other dignitaries, all in masks, maintained social distancing and sat a safe distance away from each other.

The guest list, including religious leaders who formed part of the movement that started in the 1980s, was restricted to 175 in view of the COVID-19 crisis.

Slogans of ‘Bharat Mata ki Jai’ and ‘Har Har Mahadev’ went up as the ritual ended and the prime minister laid the foundation of the temple.

Bhajans and ‘shlokas’ were heard as the town, festooned with marigold flowers and yellow and saffron flags, celebrated the beginning of the construction of a grand Ram temple. Roads leading to Ayodhya were adorned with hoardings of the proposed temple and of Ram Lalla, the infant Ram, the deity now housed in a makeshift temple. Most shops were painted in bright yellow.

The prime minister arrived in Ayodhya in a helicopter where Adityanath among others received him.

Before the function to lay the foundation stone of the 'Shree Ram Janmabhoomi Mandir', the prime minister took part in prayers at the Hanumangarhi temple.

From there, he travelled to the 'Shree Ram Janmabhoomi' where he performed prayers at the 'Bhagwan Shree Ramlala Virajman'.

He will unveil a plaque to mark the laying of the foundation stone and also release a commemorative postage stamp on the 'Shree Ram Janmabhoomi Mandir'.