The BJP, having finally succeeded with its Operation Lotus in the Karnataka Assembly – the means for this victory being inconsequential now – is bound to make strident efforts to topple the Kamal Nath and Ashok Gehlot regimes in M.P and Rajasthan now. 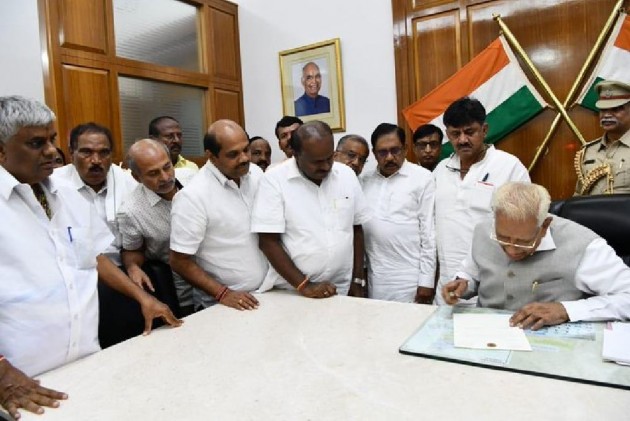 The collapse of the H.D. Kumaraswamy led JD (S)-Congress coalition government in Karnataka after it lost the trust vote, on Tuesday, is expected to shift focus to the stability of the Congress governments in Madhya Pradesh and Rajasthan which enjoy only a wafer-thin majority.

The BJP, having finally succeeded with its Operation Lotus in the Karnataka Assembly – the means for this victory being inconsequential now – is bound to make strident efforts to topple the Kamal Nath and Ashok Gehlot regimes in M.P and Rajasthan now.

With the Congress organisation still unable to recover from the Lok Sabha polls decimation and groping in the dark for an acceptable successor to Rahul Gandhi, who had quit the party chief’s post on May 25, Nath and Gehlot have largely been left to fend for themselves; warding off threats from the BJP and their own intra-party rivals alike.

Most political pundits believe that the immediate danger of collapse is in Madhya Pradesh where the Nath government’s survival depends on the loyalty of two MLAs of the BSP, three independent legislators and one SP MLA. In the state assembly polls held in December last year, the Congress had won 114 seats, stopping two legislators short of a simple majority in a house of 230 members. It managed a simple majority with the support of the BSP, SP and independent MLAs. However, soon after the Lok Sabha results, wherein the Congress managed to win only a lone seat among the state’s 29 constituencies, the Leader of Opposition in the MP Assembly, Gopal Bhargava, had declared that the Nath government had lost confidence and would collapse soon. Similar prophecies of doom were made by other BJP leaders, including the party’s strongman from Indore and national general secretary, Kailash Vijayvargiya.

Congress insiders in M.P, however, say Nath’s challenge isn’t just of keeping the BSP, SP and independent MLAs in good humour but also to ensure that MLAs loyal to other state Congress leaders, Jyotiraditya Scindia in particular, do not rock the boat for him. Scindia, who lost his family seat of Guna in the Lok Sabha polls, has been building pressure, through his supporters, to be named the Congress state chief – a post Nath currently holds but has offered to let go following the Lok Sabha rout. A section of MLAs close to another party veteran, Digvijaya Singh, are also in a rebellious mood though party sources say Singh has asked his supporters to “not do anything that destabilizes the government”.

Sources say that as the drama in Karnataka was playing out earlier this month, Scindia and Singh had held meetings with their supporters in Bhopal. A senior party leader told Outlook on condition of anonymity that while Singh “made it clear to his supporters that Nath’s government cannot be sacrificed”, Scindia urged his MLAs to “not take any drastic steps but at the same time continue demanding a say in day-to-day government affairs.”

A key grouse of MLAs and ministers in M.P who are loyal to Scindia has been that Nath and senior bureaucrats in his government do not listen to them. In fact, at a recent cabinet meeting, two ministers close to Scindia had got into a heated exchange with Nath and offered to resign. Nath’s response to them, sources say, was “I know at whose instructions you are making all this noise… if you want to go, then I won’t stop you.” Not really the kind of risk Nath should have been taking, given the fickle political state in M.P, but the bravado seemed to have paid off then and the ministers calmed down.

Sources say Nath has been planning to carry out a cabinet reshuffle to accommodate the BSP, SP and independent MLAs in key ministerial roles but in doing so, he will surely need to strike a balancing act that keeps his party’s ambitious legislators happy too. Nath had made a huge blunder when he formed his cabinet by not inducting veteran MLAs like K.P Singh into his cabinet. Back then, Digvijaya Singh had stepped in to pacify his confidante, K.P.Singh. But party sources say Nath may not be as lucky a second time round if he manages to frustrate his party’s legislators again.

In the 200-member Rajasthan assembly, Congress legislators make up for exactly 50 per cent of the strength. The rivalry between Gehlot and deputy chief minister Sachin Pilot has already become a very public affair over the past seven months, more so since the Lok Sabha polls in which the Congress failed to win even one out of the state’s 25 seats. Gehlot’s son, Vaibhav, who had contested from Jodhpur had also lost badly.

In December, the Congress high command had decided to make Gehlot the chief minister of the state, ignoring the claim of Pilot who had single-handedly resurrected the party in the state through his five-year term as state Congress chief. Pilot has been nursing that wound ever since and is presently engaged in shoring up support for himself across the state through long padyatras. Sources close to Pilot say his padyatras are his way of telling the party’s central leadership that he is not to be taken lightly, and certainly not someone whose ambitions can be stifled in perpetuity.

A senior Congress leader from Rajasthan told Outlook that the BJP has been making overtures to Pilot. Similar assertions have been made by sources close to Scindia. Both young leaders have been promised chief ministership by the BJP, say sources, but add that neither of them has accepted the offer to defect.

Congress sources say, with a great degree of confidence, that Pilot and Scindia “will not defect under any circumstances because given their profile and lineage, they know they will lose all credibility”. But in the same breath the sources add, “they can still ask MLAs loyal to them to make the going tough for Nath and Gehlot… even topple their governments for personal vendetta”.

Another senior Congress functionary Outlook spoke to said, “the current political situation in the country doesn’t even need the BJP to poach Scindia and Pilot because MLAs, irrespective of personal loyalties to any satrap, have largely realized that our party is rudderless and there is no sign of things improving… why should they stay with the losing side?”

In another two days, it would be two months since Rahul Gandhi resigned as Congress president. His calls for naming his successor have so far not yielded any result and the Nehru-Gandhi sycophants in the party are still hoping that inaction on their part to name a new commander will ultimately force Rahul to rescind his decision. Given his strong public posturing on the issue of his resignation, it is highly unlikely that Rahul will reconsider his decision but the limbo that he had plunged his party into might just queer the pitch for Nath and Gehlot too in the coming months, if not weeks.