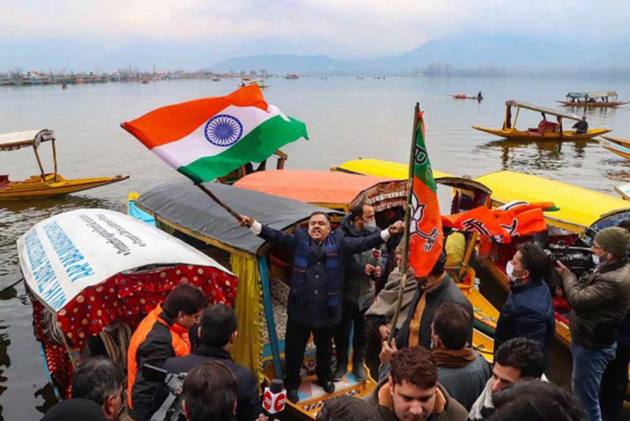 A boat carrying local BJP leaders and media persons overturned in the Dal Lake, triggering huge social media response in the Valley during the sixth phase of District Development Council elections on Sunday.

Some youth leaders from different political parties and others joined to ridicule the BJP over the accident.

At the same time, senior Congress leader and former minister Peerzada Sayeed alleged that he was not allowed to proceed towards his village to cast his vote in the DDC polls.

As a boat carrying BJP leaders and several camera persons fell in the freezing water of Dal Lake during the party’s election campaign, many youth leaders from various parties rejoiced over the overturning of the boat.

“BJP drowned in the Dal Lake”, Congress leader Salman Nizami wrote on Facebook sharing a picture of BJP leaders struggling in the freezing water of the lake. Around four BJP leaders and several camera persons fell in Dal Lake on Sunday after a shikara, which was part of the party's campaign, overturned. They were all rescued by the locals.

Omar Abdullah's tweeted: “I’m glad to hear they are all OK because the water must have been freezing cold. It’s a strange time to be campaigning on the Dal lake especially when you consider there are no elections in Srinagar at the moment.”

I’m glad to hear they are all OK because the water must have been freezing cold. It’s a strange time to be campaigning on the Dal lake especially when you consider there are no elections in Srinagar at the moment. https://t.co/9zE8XO8TB5

BJP spokesman Altaf Thakur said all the BJP workers are safe and no one drowned in Dal Lake. “Media men and BJP workers who were in the boat that overturned were rescued and are safe,” he added. To Nizami’s comment, he said, the BJP has drowned the Congress party into Dal Lake in 2014 and since then it has not emerged from it. He said Nizami should not rejoice much seeing his party's fate.

The BJP had organised the boat rally in the Dal Lake under the leadership of Union minister of state for finance Anurag Thakur.

Meanwhile, Congress leader Peerzada Mohammad Sayeed said he was not allowed to cast his vote in his constituency in the district development elections. He said he was called by a police official and was informed not to proceed towards his village in South Kashmir’s Anantnag district as there are security concerns. “If there were security concerns, they should have provided me security. I was not allowed to cast my vote and it is an infringement in my democratic rights,” he added.

The current District Development Council elections in Jammu and Kashmir are the first polls in J&K since the abrogation of special status granted to the erstwhile state under Article 370. The DDC elections are being held in eight phases till December 19. The results will be declared on December 22. So far, six phases have completed. There are 280 DDC constituencies in Jammu and Kashmir.

The first phase of the DDC polls was held on November 28 and it saw a turnout of 51.76 per cent. The second phase on December 1 recorded 48.62 per cent turnout. The third phase saw 50.53 per cent voter turnout with Kashmir recording an average turnout of 31.61 per cent and Jammu recording an average turnout of 68.88 per cent. In the fourth phase on December 7, the turnout was 50.08 per cent. In the fifth phase of polling Kashmir recorded 33.57 per cent polling, Jammu registered 66 per cent polling, taking the overall turnout in J&K to 51.20 per cent. In the sixth phase today, officials said a voter percentage of 42.79 per cent was recorded in different constituencies spread over different districts of Jammu and Kashmir till 1pm. Kashmir Valley recorded an overall polling percentage of 26.28 per cent while Jammu recorded 56.90 per cent till 1pm.

In north Kashmir, which comparatively sees a good percentage of voting in contrast to South Kashmir, voters said the elected DDC candidates would work for the development of the area and would create jobs. They said the candidates know problems of local areas and have understanding of issues. “We strongly believe that they would create jobs,” said a group of voters in north Kashmir’s Kupwara district.

On October 17, the Centre amended the Jammu and Kashmir Panchayati Raj Act, 1989, for holding direct elections to the DDCs. Under the new rules, each district has been divided into 14 territorial constituencies by the respective deputy commissioners for electing their representatives, who will then among themselves elect the chairman and vice-chairman of these councils. In the eight phases, there are 280 DDC constituencies in Jammu and Kashmir.

Even since 2018 when the PDP-BJP government fell, Jammu and Kashmir has been under governor’s rule.