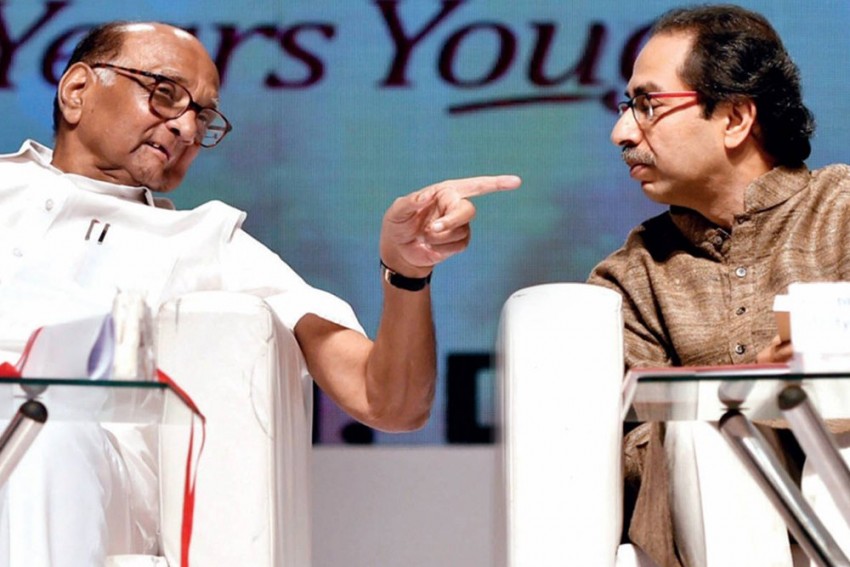 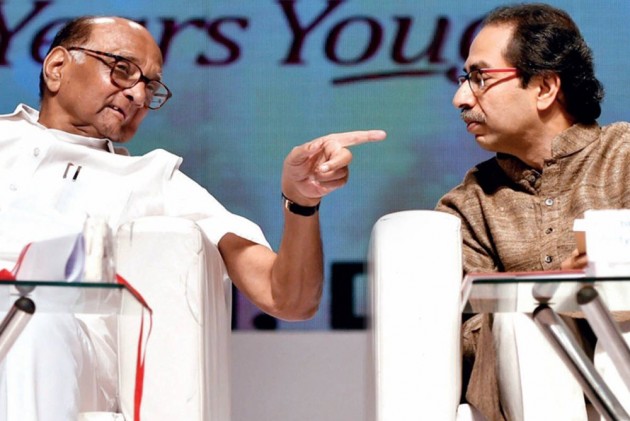 A day after President's rule was imposed in Maharashtra, Shiv Sena, Congress and NCP leaders held hectic parleys to work out a Common Minimum Programme (CMP) for government formation.

Shiv Sena president Uddhav Thackeray met Maharashtra Congress leaders for over an hour on Wednesday morning. The talks for the formation of government were progressing in the "right direction", he said after the meeting.

State Congress chief Balasaheb Thorat dubbed the meeting with Thackeray as a "courtesy call", and added the fact that they were meeting was itself a "positive" step.

Meanwhile, the Sharad Pawar-led NCP appointed a five-member panel, which will be part of a joint committee to be formed with the Congress to decide on the CMP before a possible alliance with the Sena is finalised.

Patil, state NCP chief, told reporters after meeting Sharad Pawar that the power-sharing formula was not being discussed as of yet.

"We have not set any conditions before the Shiv Sena. Right now, we are working on the agenda for governance. Arvind Sawant has quit the Narendra Modi government and we believe through this step, the Sena has officially pulled out of the BJP-led NDA," he said.

Senior Congress leader Prithviraj Chavan said the talks on government formation will start only after top leaders of the three parties approve the CMP.

There was speculation that the Congress may get the posts of deputy chief minister and assembly speaker in the new arrangement, while the chief minister's post will be shared by the NCP and Sena.

Chavan, too, maintained that the power-sharing formula was not presently being discussed.

Chavan also said that the Congress was on alert to prevent a possible "Operation Lotus" -- alleged attempts by the BJP to engineer defections from other parties -- in Maharashtra.

The BJP, meanwhile, tried to needle its ally-turned-foe Shiv Sena. "It is up to the Shiv Sena how to fit their Hindutva agenda in the Common Minimum Programme with Congress," BJP leader and Union minister Raosaheb Danve said.

On its part, Saamana, the Sena mouthpiece, attacked the BJP in its editorial. It said the BJP was deriving "sadistic pleasure" out of the struggle of other parties to form government in Maharashtra.

In a related development, Congress MLAs who were camping at a resort in Jaipur for the last five days returned to Mumbai on Wednesday.

The BJP and Shiv Sena, which fought the October 21 state elections in alliance, secured a comfortable majority by winning 105 and 56 seats, respectively, in the 288-member assembly. The Congress and NCP won 44 and 54 seats.

But the BJP did not cede Sena's demand of sharing the CM's post, leading to falling apart of the nearly three-decade-old alliance.

The Shiv Sena, meanwhile, did not mention in the Supreme Court its plea challenging the Governor's decision not to grant it three days' time to get the letters of support to form the government.

Sena lawyers told PTI that the party preferred not to mention the petition as there was a change in the situation after the imposition of President's rule.