The Shiv Sena said those who talk of ethics in politics are currently the 'most disruptive'. 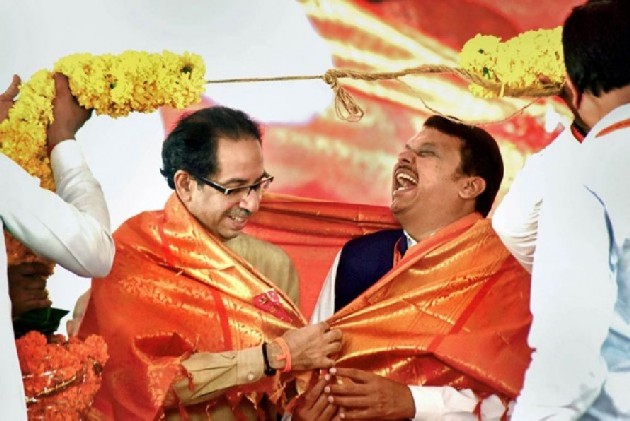 In a vitriolic attack on the BJP, the Shiv Sena on Wednesday said it was deriving "sadistic pleasure" out of the struggle of other political parties to form government in Maharashtra.

Without taking any names, the Sena, in an editorial in party mouthpiece 'Saamana', said those who talk of ethics in politics are currently the "most disruptive".

President's rule was imposed in the state on Tuesday after Governor Bhagat Singh Koshyari sent a report to the Centre, stating that formation of a stable government was impossible in the current situation despite all his efforts.

Sena Will Work Out Formula With NCP, Congress To Form Maha Govt: Uddhav

The development came as the political stalemate continued since the declaration of Assembly poll results last
month, with the Congress and NCP saying they had not yet taken any decision on Shiv Sena's proposal of forming a government and will hold further discussions.

Prior to it, the BJP, which won 105 seats, on Sunday expressed its inability to form government due to lack of enough numbers.

Despite their alliance getting a majority, the BJP and the Shiv Sena parted ways following a disagreement over power-sharing, with the Uddhav Thackeray-led party insisting on the chief minister's post.

"If a party with 105 MLAs could not form government, others would struggle for sure. But it does not mean the largest party should rejoice. This attitude of deriving sadistic pleasure has pushed Maharashtra into today's situation," the Sena claimed.

The BJP, as the single largest party, was given "15 days" to form government, but the Sena got merely 24 hours, it rued.

How could signatures of all MLAs be secured when some were out of the state? the Sena wondered, adding that "this is called misuse of the state machinery".

"Despite having a clear idea that three parties (Sena, Congress and NCP) need to coordinate properly, the Raj Bhawan gave only 24 hours and on (their) failure (to muster numbers), the BJP was seen rejoicing, it is not a good sign," it said.

It seems someone is happier over non-formation of government in the state, the Sena said in sarcastic comments.

"Those who talk of ethics in politics are the most disruptive in the current politics," the Marathi daily said.

It alleged that the BJP's decision to sit in the opposition was not a strategy, but part of some conspiracy.

"The mandate was for the BJP and Shiv Sena. Had the BJP kept its promise, we would have not searched for an alternative. The BJP talks of being a party of principles, morality and civility, then it should have followed it after the Assembly elections," the Sena said.