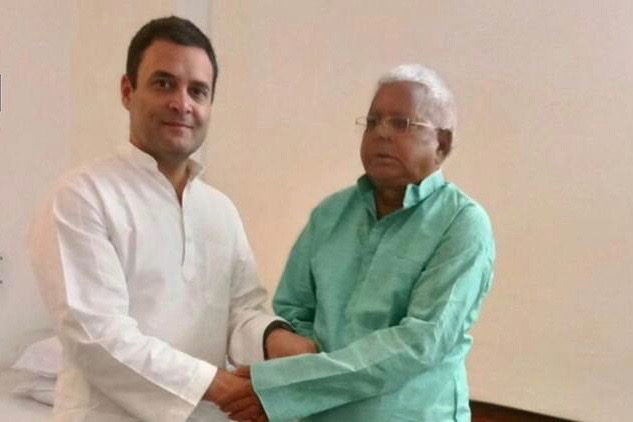 With notification for the first two phases of the seven-phase Lok Sabha polls in Bihar already issued by the Election Commission, Lalu Prasad Yadav’s RJD and the Congress party have finally agreed to a seat sharing formula for the ‘mahagathbandhan’ (grand alliance) in the state.

The alliance talks, which had hit a deadlock last week after the Congress refused to accept the RJD’s offer of contesting on eight of the state’s 40 Lok Sabha seats, were finalised late Tuesday, after both parties showed some flexibility in the seat sharing talks.

A senior Congress leader privy to the alliance talks said that as per the compromise formula, the Congress will field candidates on nine seats, as against the 11 seats it had demanded earlier. The RJD is expected to contest from 19 seats while the RLSP – a late entrant into the Mahagathbandhan following Kushwaha’s decision to part ways with the Prime Minister Narendra Modi-led NDA coalition – has been given four seats.

Former Bihar chief minister Jitan Ram Manjhi, who was initially adamant to get the same number of seats as being offered to the RLSP, too has scaled down his demand and accepted fielding HAM candidates from two seats. Sharad Yadav’s outfit, a breakaway faction of Bihar chief minister Nitish Kumar’s Janata Dal (United), will also contest from two seats with Yadav being the candidate from his traditional Madhepura constituency which he had lost to the BJP in the 2014 Lok Sabha polls. Mukesh Sahni’s Vikasheel Insaan Party and the CPI (ML) have been offered one seat each in the alliance.

Interestingly, youth leader and former president of the Jawaharlal Nehru University’s Students Union, Kanhaiya Kumar, who had been extensively campaigning in Begusarai and positioned himself as a mahagathbandhan candidate from the CPI quota, has been left out, for now.

Sources said, the RJD is still keen on fielding Kumar and talks are on to convince him to move to the Ara constituency and contest on the CPI (ML) symbol or as a candidate of any other constituent of the alliance. Sources said if the CPI and Kumar remain insistent on the Begusarai constituency, the seat sharing formula “may be tweaked” a little, which is why a formal announcement on the alliance has been withheld for now.

Another interesting speculation coming from Patna Sahib is that sitting MP and rebel BJP leader, Shatrughan Sinha, is in talks with the mahagathbandhan leaders to finally switch political sides. Sources said that a decision on which constituent of the alliance – the RJD or the Congress – Sinha will join depends on which of the two parties bag the Patna Sahib seat as part of the final seat sharing formula. Sinha shares a good rapport with Lalu and his heir-apparent, Tejashwi, and has been singing praises of Congress president Rahul Gandhi too for the past few years.

Sources said that barring a few outstanding issues, the alliance is done and dusted. Sharad Yadav, Tejashwi and Congress general secretary in charge of Bihar, Shakti Sinh Gohil, all confirmed that the alliance talks had finally yielded results. While Yadav confirmed that the announcement will be made jointly by all alliance leaders on March 22, Tejashwi too said that the seat-sharing formula will be made public after the March 21 Holi festivities.

Sharad Yadav, Loktantrik Janata Dal (LJD) to ANI: Mahagathbandhan will do a press conference in Patna on 22nd March to announce the seat sharing in Bihar. (file pic) pic.twitter.com/RWBg2wmTpR

For the Congress the alliance comes as a major relief since its efforts at stitching a similar pact with the Left Front in Bengal and the Aam Aadmi Party in Delhi failed recently. Sources said that efforts to bring the Left Front and AAP on board are still going on but were now incumbent on the flexibility that these parties show in accepting the Congress’ demands for seats in Bengal and Delhi.