Thousands of Delhi Police personnel on Tuesday staged a protest against the assault on their colleagues by lawyers at the Tis Hazari court. Read all latest updates here. 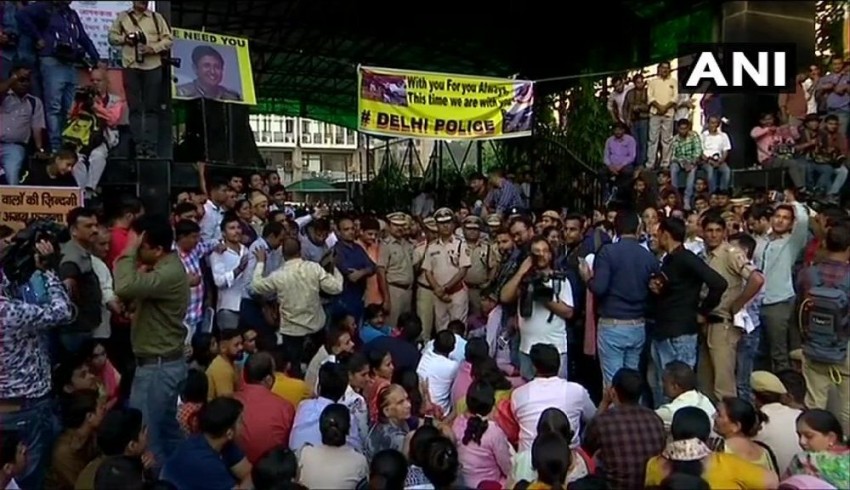 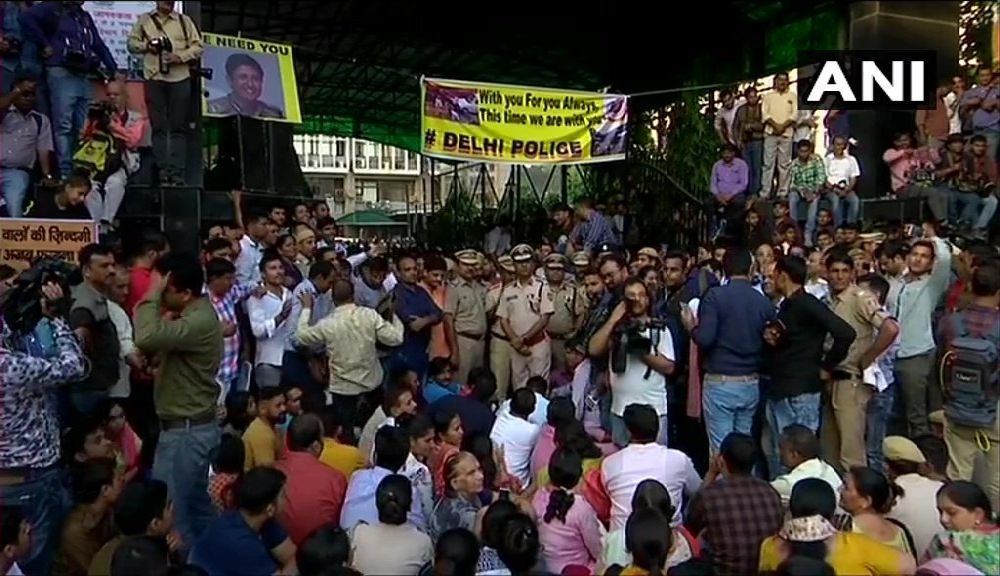 The scuffle between lawyers and policemen at Delhi's Tis Hazari court snowballed into massive protests by Delhi Police on Tuesday.

Thousands of police personnel protested outside the Police Headquarters to demand action against those involved in an attack on their colleague outside the Saket court on Monday. Though Delhi Police Commissioner Amulya Patnaik urged the cops to return to their duties, the protesting policemen are refusing to budge and demanding "justice".

8:10 PM: Protesting cops call off day-long protests after several appeals and assurances by the top cops and  L-G.

7:01 PM: The IPS Association's Kerala chapter has backed the protests by Delhi Police and condemned the attack on them by lawyers of Delhi-based courts.

6:52 PM: Special Commissioner of Police Delhi, RS Krishnia: "All the policemen who were injured in Tis Hazari Clash will be given a compensation of at least Rs 25,000 by Delhi Police.

6:15 PM: It is imperative to restore trust between police and lawyers: Delhi LG after reviewing the situation.

6:04 PM: Delhi LG Anil Baijal advises Commissioner of Police, Delhi that senior officers should visit the injured policemen to boost their morale and comfort their families. Suitable ex-gratia to be given to the injured officers of Delhi Police.

6:00 PM: Joint Commissioner of Police Devesh Srivastava while addressing the protesting cops said all their demands would be accepted. "FIRs have also been registered in connection with Saket and Tis Hazari Court incidents. No departmental action will be taken against those who are protesting."

5:07 PM: BJP's Delhi unit chief Manoj Tiwari urged both police and lawyers to resolve the matter amicably. "I appeal to the senior lawyers and police officers to resolve the dispute amicably so that anti-social elements or terrorists cannot take advantage of the situation," said Tiwari, the BJP MP from North East Delhi.

4:52 PM: Delhi HC issues notice to BCI and other bar associations on the Centre's plea.

4:46 PM: The Ministry of Home Affairs has moved the Delhi High Court seeking clarification on Sunday's order directing that no coercive action be taken against lawyers on whom FIRs were filed in view of the clashes at Tis Hazari Court.

4:41 PM: Rajesh Khurana, Joint Commissioner of Police, Delhi was jeered at when he tried to address the police personnel protesting at the Police Head Quarters. He said: "We are the one who enforce the law and we have to continue with our work."

4:24 PM: A policeman and a civilian filed two FIRs on Tuesday, alleging they were assaulted by lawyers at the Saket Court Complex in South Delhi, an official said. The FIRs were filed at Saket police station in connection with the assaults on Monday, PTI reported.

#WATCH Delhi Police personnel raise slogans of "Humara CP (Commissioner of Police) kaisa ho, Kiran Bedi jaisa ho" outside the Police Head Quarters (PHQ) in ITO. They are protesting against the clash that broke out between police & lawyers at Tis Hazari Court on 2nd November. pic.twitter.com/f4Cs7kx9Dr

3:19 PM: The Aam Aadmi Party lashed out at the Delhi Police accusing them of having been turned into a political entity that works like an "armed wing of BJP".

3:15 PM: The Union Home Ministry received a report from Delhi Police on the clash between lawyers and police at the Tis Hazari court complex in which at least 20 security personnel and several advocates were injured, PTI reported.

2:41 PM: Faced with the bad press after a lawyer slapped a policeman outside the Saket Court, the Bar Council of India on Tuesday recalled its Coordination Committee resolution that asked lawyers to abstain from work. The BCI has appealed advocates to resume work from Tuesday.

2:20 PM: Patnaik says these are testing times for the Delhi Police, assuring them a judicial enquiry was being carried out in the matter.

2:11 PM: Patnaik said Monday's incident outside Saket court, in which a lawyer was caught on camera elbowing and slapping a cop, was a stray incident and "we shouldn't generalise."

2:10 PM: Commissioner of Police Amulya Patnaik said the last few days had been challenging due to certain incidents in the national capital but "we have handled them well." "The situation is improving," Patnaik said, urging his fellow policemen to be patient.

2:00 PM: Congress targeted the central government over the protests led by Delhi Police, questioning whether it was "BJP's 'new India'." Congress termed the development as a new low in 72 years of the country's Independence.

1:50 PM:  Union Minister Kiren Rijiju on Tuesday put out a tweet supporting the Delhi Police, even as cops continued to protest. The minister, however, later deleted the post from the microblogging site.