A beaming Priyanka was welcomed by senior party leaders including Uttar Pradesh Congress unit chief Raj Babbar when she landed at the airport. Partymen jostled for a glimpse of her. 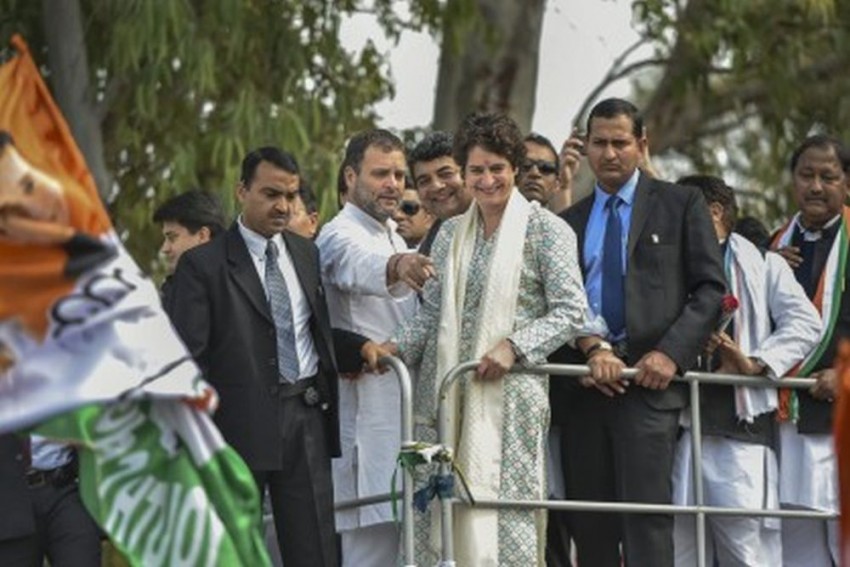 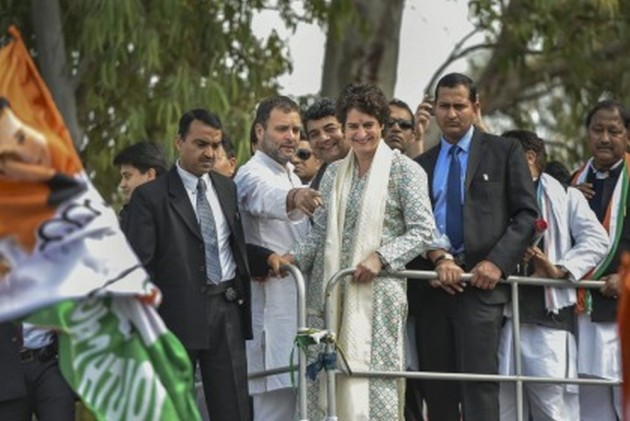 Slogans of 'Aa Gayi badlaav ki aandhi, Rahul sung Priyanka Gandhi' (Change is coming, Rahul along with Priyanka Gandhi), rent the air as Congress General Secretary Priyanka Gandhi Vadra launched her roadshow in the Uttar Pradesh capital on Monday, on her first visit after being made party in charge of East UP.

Accompanied by Congress president Rahul Gandhi and incharge of the western region, Jyotiraditya Scindia, the beaming 47-year-old sported a kurta and a stole, and waved at the teeming party workers jostling for a glimpse.

"Come, let's build a new future, new politics with me. Thank you," she said in her message to the people ahead of the visit to the state.

When the three leaders embarked on a roughly 25-km-long roadshow, from the airport to the party headquarters, to woo voters in the Lok Sabha polls, rose petals and marigold garlands were showered at their cavalcade.

As her 'rath' inched through major thoroughfares, enthusiastic people and party members took vantage positions to click a prized photo.

Enthusiastic Congress workers took to the streets to celebrate the arrival of the two new AICC incharges, with party tricolours and hoardings all over giving the city a festive look.

Since early morning, Congress workers were seen busy giving final touches to the arrangements for the roadshow, distributing food packets, tea and water to passersby. Patriotic songs were played on loudspeakers perking up the mood.

Some posters showed Priyanka in 'Durga Mata' avatar riding on a lion.

"Maa Durga ka roop behen Priyankaji (Sister Priyankaji is Maa Durga's incarnation) said one poster, while some others highlighted her resemblance to Indira Gandhi, her grandmother.

Besides workers of other front organisations of the party, some Congress workers -- said to be members of Priyanka sena, a little known outfit -- were seen wearing pink T-shirts with her photograph.

"With the Priyanka Sena at the Nehru Bhawan, Lucknow it is almost celebration here," tweeted Sushmita Dev, president of all India Mahila Congress.

A day before her maiden visit to Uttar Pradesh as Congress general secretary, Priyanka Gandhi said that together with the people of the state she hopes to start a "new kind of politics" in which everyone will be a stakeholder.

The two general secretaries will interact with party workers at the state Congress office in Lucknow on February 12, 13 and 14.

"This is an opportunity for the Congress to strike back in the most crucial state of the country where the organisation had all through been wanting her to plunge into active politics," he said.

Priyanka Gandhi is the Congress' big hope for the 2019 Lok Sabha elections who will be shouldering the responsibility of reviving Congress fortunes, especially in the eastern part of Uttar Pradesh, say party insiders.

Her entry into active politics has been at a time when the party is not only witnessing one of the most difficult times electorally but has also been sidelined by prospective allies for the 'mahagatbandhan' with the Samajwadi Party and BSP totally ignoring it in forming their alliance.

Priyanka Gandhi is pitched as a big draw with her charisma and voter connect, but her 'rescue Congress' mission remains a daunting task in the state where the party has been pushed on the margins with the advent of caste based politics since the last 30 years.

Though she is no stranger to such roadshows with her brother, she is seen campaigning for the first time outside the Gandhi family constituencies of Amethi and Raebareli and her political acumen and connect with the public will be at test for the first time.

The last two Lok Sabha by elections in eastern Uttar Pradesh, for the Gorakhpur and Phulpur, were disastrous for the Congress. Party candidates managed to fetch only around 19,000 votes each and registered only a 2 per cent vote share in each constituency.

In 2014, the Congress just managed to retain the Gandhi family constituencies of Amethi and Raebareli, as compared to the 21 it had won five years earlier. The party's voteshare also dropped by almost 50 per cent between 2009 and 2014.

"Both are young and popular, he said. They have a certain hold over the public and have leadership qualities and a rapport with the common man."

Congress leaders said Priyanka Gandhi's into active party politics will galvanise the workers, helping them take on the dual challenge posed in the state by the BJP and the SP-BSP alliance.