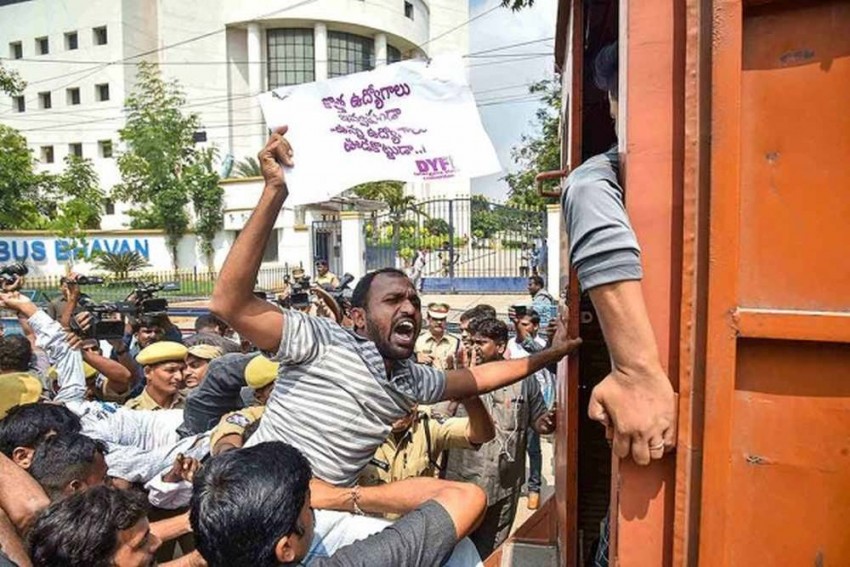 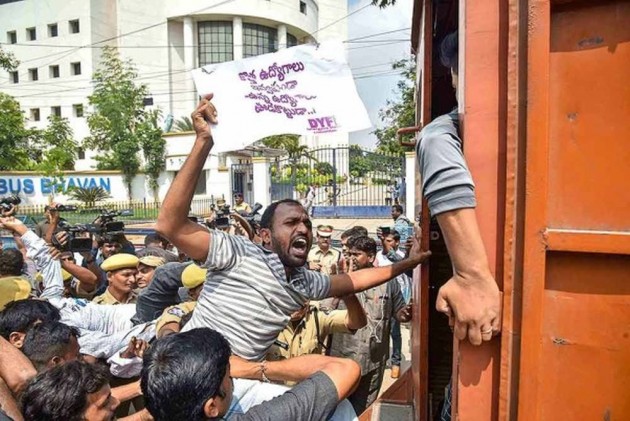 The Telangana unit of the Bharatiya Janata Party (BJP) has sought the governor’s intervention to stop the state government from shutting the loss-making state Road Transport Corporation (TSRTC).

The BJP said it will take all necessary actions required to expose CM K Chandrasekhar Rao's allegedly shady handling of the issue concerning livelihoods of more than 48,000 RTC employees and a public transport system that impacts four crore people of Telangana.

The Telangana High Court has also rapped Telangana Rashtra Samithi (TRS) government in the past two days as it questioned the brazenness of the government for misrepresenting facts and evading submission of accounts to even to the judges.

Earlier the court had directed the RTC and its employees to hold discussions and settle all their disputes before October 28. But a meeting on Saturday between them turned futile with neither side ready to budge from its position.

However, sources close to the chief minister said that KCR was not worried over the High Court’s final verdict as the battle was going to be long and he might move the Supreme Court, if needed, to take his fight to shut down RTC to its ‘logical’ conclusion.

The RTC workers have been indefinitely on strike for over 20 days and their demands include merger of the corporation with the government, pay revision, and recruitment to various posts, among others.

Commenting on the protests, chief minister K Chandrasekhar Rao, popularly known as KCR, had said on October 25 that nobody could save the public transport utility from shutting down. “The strike will end with the RTC itself. Yes, it is going to happen,” he said.

Further, he announced his government’s determination to privatize around 4000 km routes across the state. He also ridiculed the claims of some Opposition members that his government was eyeing for ‘RTC properties.’

BJP feels it is time for Governor Tamilsai Soundarrajan to take a proactive initiative by summoning the State Chief Secretary to place RTC’s audited financial accounts from fiscal 2014 to 2019 before her. The party said she should also demand a ‘white paper’ of the government's capital infusion and pending dues to RTC during the last 6 years.

Telangana BJP spokesperson Krishna Saagar Rao said, “It’s now evident from the learned judges' observations that the TRS government and its senior administrative officers are blatantly lying to even the honourable High Court and misrepresenting facts. It's imperative that in her capacity as custodian of the Constitution that the Governor should intervene immediately”.

During the two-day hearing on the agitation by RTC workers, the High Court found fault with the KCR government for not appointing a full-fledged managing director of the Corporation despite its directive, not once, but twice.

“Had there been a managing director, he could have as well resolved the issue. What’s your problem? Why you are not doing it?” the Court asked Advocate-General Ramachander Rao, who represented the government.

The bench headed by the Chief Justice Raghavendra Singh Chauhan and Justice Annireddy Abhishek Reddy also pulled up the government for its reluctance to rescue the ailing corporation with lame excuses. The bench also wondered what the Centre was doing as it has 31 per cent stake in the TSRTC.

Commenting on the Centre’s role, the BJP spokesperson said the Centre extends some financial assistance to any state while setting up the Corporation. “It’s only customary to send money. That’s all,” he added.

Further hearing in the case has been scheduled on November 1.

Meanwhile, riding high on the victory in Huzurnagar bypolls, KCR appeared unperturbed by the High Court’s caustic remarks against his government.

During the hearings, the bench had also warned the government’s counsel not to teach them about Article 226 or other laws and added that for them the ‘sky is the limit'.  Under Article 226, the high courts can issue, to any person or authority, including the government,  directions, orders or writs.

The Court’s comment came after KCR had challenged the judiciary at a news conference saying the courts had no jurisdiction to intervene in a democratically elected government’s initiatives.

The RTC, which provides the cheapest mode of travel for many in the state, has for long been suffering from losses. In a recent meeting, chief minister KCR, said that the corporation has been incurring a loss of Rs 100 crore every month and Rs 1,200 crore every year with outstanding loans of about 5,000 crore rupees.