The FCIK delegation led by its President Shahid Kamili appraised the crisis situation to the PSC during their interaction with them at SKICC.

The Federation Chamber of Industries Kashmir (FCIK) Thursday told the Parliamentary Standing Committee on Home Affairs that Industry in J&K is facing ‘existential crises’ and sought an immediate bailout.

The FCIK told the Committee that it is becoming increasingly unviable and difficult to continue the operation of industrial units as they are not able to compete in the market after various concessions enjoyed by the industry in J&K were withdrawn. “If the current business ecosystem persists, I am afraid J&K will see more closure of manufacturing units,” FCIK President Shahid Kamili told the Committee.

Kamili said the toll tax, entry tax, vat remission, freight subsidy, price preference, purchase preferences were the major protections granted as a special package under J&K Industrially backward Status. He said after its withdrawal the industry has deteriorated and not progressed.

Kamili described allowing of local purchases from the government e-market portal in J&K as the last nail in the coffin to save the ailing industry in J&K. He said in absence of the incentives, the cost of input of raw material has increased and as a result, the cost of production has hiked up beyond the selling price of other states.

“The industry is facing open competition with the rest of country whose working conditions, working hours are much better, availability of cheap raw material and business ecosystem is favourable,” Kamili told the Committee.

The abrogation of Article 370 on August 5, 2019, and subsequent lockdowns have caused huge losses to businesses in Jammu and Kashmir. Last year, a report by the Kashmir Chamber of Commerce and Industries (KCCI) said that alone Kashmir's economy has suffered a whopping Rs 40,000 crore and over one lakh jobs in the private sector due to the extension of lockdowns imposed on Kashmir after the abrogation of Article 370. Without mentioning the abrogation of Article 370 in his presentation, Kamili made it a point to spell out the present condition of industry in Kashmir Valley and how it has immensely suffered over the years. He said for the past decade Kashmir industrial sector has not got a chance to revive after suffering losses due to the floods of 2014, six-month-long unrest in 2016, the situation in 2019, and now prolonged lockdowns imposed during two Covid waves in 2020 and 2021.

“The existing industry is in such a bad shape that every single account has been uploaded with four restructurings (one account is paying interest on four additional accounts),” he said.

Kamili said electricity demand charges should be waived off from August 2019, GST reimbursement should be made hassle-free and reimbursement should be also within a limited timeframe. He said toll and alternate tax exemption should be made applicable in J&K to safeguard the local industry. “RBI should give relaxation and reimburse of interest charged on account of rehabilitation packages of flood 2014, unrest 2016 on the same lines as were announced by the apex court.”

However, the FCIK president said many initiatives were taken by the present administration led by Lt Governor Manoj Sinha for the industry but more initiatives are needed from the Government of India to revive the existing industry. He said the Prime Minister’s package for the new industry is appreciable but the package should first be applied to the present ailing industry to revive it. 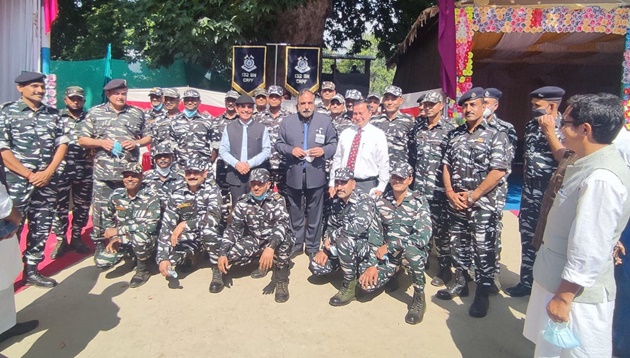 On the second day of its four-day visit to Jammu and Kashmir, Parliamentary Standing Committee on Home Affairs also held a meeting with the top civil administration. A government spokesman said the Chief Secretary of J&K, Dr. Arun Kumar Mehta gave a detailed presentation highlighting the achievements and the functioning of all the departments. The Committee is comprising of 28 Members of Parliament from Lok Sabha as well as Rajya Sabha is headed by senior Congress leader and Member of the Parliament, Shri Anand Sharma.

A government spokesman said the government told the committee, “about the steps taken in the past few years for democratic decentralization, the meeting was informed about the conduct of elections for district development councils and block development councils thus strengthening the grassroots level democracy.” The panel also visited the CRPF camp of 132 battalions housed at Nedous Hotel Maulana Azad Road Srinagar. The committee members held an interaction with the paramilitary forces of the camp.