The prime minister praised the scientists, doctors, paramedical staff, and others involved in vaccine manufacturing in the country, saying India did not have to depend on others for vaccines against Covid-19. 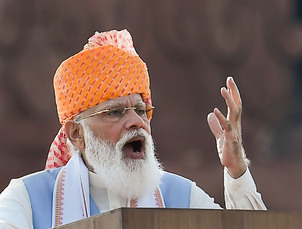 Prime Minister Narendra Modi said on Sunday that India takes pride in having the world's largest COVID-19 vaccination programme and more than 54 crore people have already taken the vaccine shots.

In his Independence Day address from the ramparts of the Red Fort, the prime minister spoke of the country's fight against the COVID-19 pandemic and praised the scientists, doctors, and paramedical staff among others.

He lauded those involved in vaccine manufacturing in the country, saying India did not have to depend on others for vaccines due to their efforts.

"Today, we can proudly say that the world's largest vaccination programme is being run in our country. More than 54 crore people have received the vaccine doses," he said.

Modi said had India not developed its own vaccine, its supply from outside would have been uncertain.

"The period of the coronavirus pandemic presented a big challenge in front of our country and the entire human race. Indians fought this fight with great grit and patience. We had many challenges. The countrymen performed extraordinarily in every field. It is due to the power of our entrepreneurs and scientists that the country is not dependent on anyone or any country for vaccines. Imagine for a moment, if we did not have the vaccine. How long did it take to get the polio vaccine?

"It was extremely difficult to get vaccines during such a major crisis, with the pandemic plaguing the entire world. India might or might not have received it and even if it had received the vaccine, there was no certainty of getting it in time," he said.

The prime minister stated that online platforms like CoWIN and the system of giving digital vaccination certificates are attracting the attention of the world.

He said though it is true that compared to other countries, fewer people got infected with COVID-19 in India and that in comparison to the population of other countries, India managed to save more people from succumbing to the viral disease, is not a matter of self-congratulation.

"It is not something to be proud of. We cannot rest on these laurels. To say that there was no challenge will become a restrictive thought in the path of our own development.

"Our systems are insufficient compared to that of the rich countries of the world, we do not have what the rich countries have. Moreover, we also have a greater population compared to the other countries. Our lifestyle is also different. Despite all our efforts, we could not save many people. So many children have been orphaned. This unbearable pain is going to remain forever," Modi said.

He also lauded the scientists, doctors, and paramedical staff for their role in combatting the pandemic.

"Our doctors, nurses, paramedical staff, sanitation staff, scientists engaged in developing vaccines, millions of countrymen engaged with the spirit of service during this corona pandemic, they all deserve salutation from us," Modi said.

A campaign to provide better health facilities to every poor person in the country is also going on at a fast pace. For this, important reforms have been made in medical education, the prime minister said, adding that there has been a substantial increase in the number of medical seats in the country.

Equal attention has been paid to preventive healthcare. Under the Ayushman Bharat scheme, quality health services are being provided to every village, he said.

Affordable medicines are being made available to the poor and middle class through the Jan Aushadhi Yojana, he stated.

"So far, more than 75,000 health and wellness centres have been set up. At the block level too, modern health infrastructure is being exclusively set up in a network of good hospitals and modern laboratories. Very soon, thousands of hospitals in the country will have their own oxygen plants," Modi said.

Along with the concern of basic needs, reservation is being ensured for the poor sections of the Dalits, backward classes, tribals, and the general category. More recently, in medical education, a system of reservation has been made for the OBC category in the all-India quota, he highlighted.

Talking about the provision of free ration to 80 crore people during the pandemic, the prime minister said it has surprised the world and is being talked about.

"The way India has kept the stoves burning in the poor households by providing free foodgrains to 80 crore countrymen continuously for months during the pandemic is not only astonishing to the world but also a matter of discussion," he said.

Modi also called for steps to bridge the gap between villages and cities.

He batted for achieving a 100-per cent coverage of schemes such as Ayushman Bharat among the intended beneficiaries.

"Every poor person of the country knows the importance of Ujjwala to Ayushman Bharat. Today, the speed of government schemes has increased and these schemes are achieving the desired goals. We have progressed much faster than before, but it does not end here. We have to achieve saturation.

"All the villages should have roads, all the households should have bank accounts, all the beneficiaries should have Ayushman Bharat cards and all the eligible persons should get the benefits of the Ujjwala Yojana and should have gas connections. We have to connect every entitled person with the government's insurance, pension, and housing schemes. We have to move ahead with a mindset of cent percent achievement," the prime minister said.