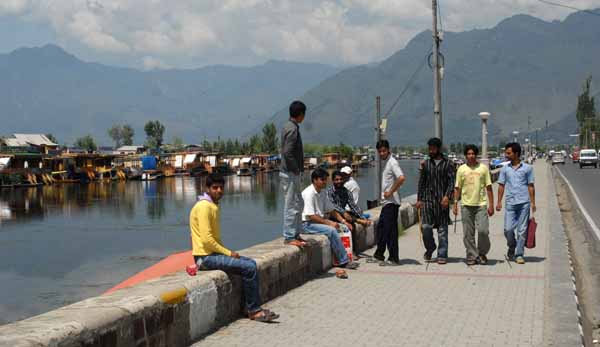 Outside the baker’s shop, there was the usual rush. I was waiting for my turn when a person asked whether Mullah Baradar and Anas Haqqani have patched up. All of a sudden everyone seemed to be interested in the discussion. One youngster volunteered to participate in the discussion and revealed that Mullah Baradar has given an interview in Kandahar and everything between these two leaders looks fine. Then the conversation moved to Kabul from Kandahar.

few years. After the takeover of the Taliban of the country, they have developed interest even in the Taliban cabinet. In WhatsApp groups, books about Afghanistan are recommended and articles about Afghanistan are shared. And it is not boring anyone here. No one says enough. Everyone asks for more. The political discourse in the Valley revolves around Afghanistan. What about the impact of the Afghan situation on Kashmir? This question is repeatedly asked to the top police and the army officials in Kashmir. Every time they say there will be no impact and the forces are prepared. Still, the question is repeated and the answer, invariably is the same.

In ‘Naya Kashmir', Even Women Not Spared From Cruelty: Mehbooba Mufti On SPO's Arrest

A Slow Death Of The Famed Kashmir Carpet Industry

If you have nothing to ask the National Conference president and the former chief minister of Jammu and Kashmir, Farooq Abdullah, ask him about the Taliban and Afghanistan and you will get the answer. It seems Dr Farooq enjoys talking about Afghanistan and the Taliban. It also makes good television.

Dr Farooq has been repeatedly heard saying that there is a need to initiate discourse with the Taliban in Afghanistan to protect India’s investment in the war-torn nation. India, Dr Farooq says, has spent billions on “different projects” during the previous Ashraf Ghani-led dispensation in Afghanistan. Last month he said the Taliban should try to build “friendly relations” with every nation and hoped that the Taliban would deliver “good governance and follow Islamic principles” in Afghanistan.

Former Chief Minister Mehbooba Mufti was quoted saying the Taliban has come to the fore as a reality and its image in the first time in power was that of anti-human rights. “If it wants to govern Afghanistan, it will have to follow the true Sharia law as laid down in the Quran which guarantees rights of women, children and elderly." Hurriyat leader Prof Abdul Gani Bhat, who maintains silence when it comes to Kashmir and Article 370, talks at length about Afghanistan and China.

In the case of Kashmir, he says discretion is the better part of valour. It appears Prof. Bhat’s advice is implemented by everyone in Kashmir after the abrogation of Article 370.
Local newspapers have nothing much than government statements. Most of the Kashmir based newspapers today are about government announcements and events.
No other event gets any prominence in most of the newspapers of Kashmir except the government event.

Even on social media, no one complains. Instead, people prefer posting about Kabul and Anas Haqqani and his father Jalaluddin Haqqani, and how Jalaluddin Haqqani got married to an Arab princess than what is taking place in the Valley.

And those who think posting about Afghanistan might someday be seen as seditious activity; they prefer to post poetry, that too Urdu poetry in Urdu script.
Some prefer to post about Covid-19 and famous sayings of famous people like this too shall pass!”

Others like to post Kashmiri “wande czale, sheen gale, bayi yee bahar (Winter will go, the snow will melt and spring will return).

Kashmiri social media, which otherwise, was vibrant and argumentative, has lost its shine.
These days no Kashmiri dares to talk about Kashmir. Everyone says with a sigh, "ye waqat ti rozi nai khen (this too shall pass!).

Even journalists don’t get quotes. Known politicians talk on the condition of anonymity. Experts when called for quotes say they don’t have the expertise to talk about the subject. Employees say they cannot talk as they are employees.

It is safe to be a Kabul expert in Kashmir than a Kashmir expert.
That is why every customer at the baker's shop jumped in to talk about Afghanistan.