Gangster Vikas Dubey Killed: From Ambush To Encounter, All In 8 Days

Gangster Vikas Dubey was killed in an encounter after a police vehicle carrying him from Ujjain to Kanpur met with an accident and he tried to escape from the spot, police said. 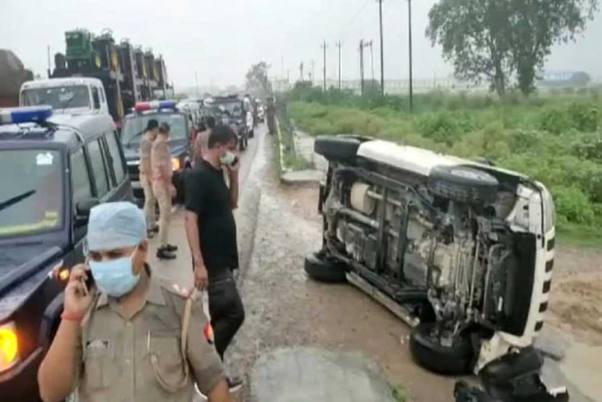 Vikas Dubey was a relatively unknown name in Uttar Pradesh and its underworld till Friday, July 3.

As the sun dawned on Friday, Vikas had become the most dreaded name in the country.

He and his accomplices had shot dead eight police personnel in Bikru village under Chaubeypur police circle in cold blood.

The police team had gone to Vikas's house in the wee hours of Friday to arrest him in a case of attempted murder.

Vikas, who had been tipped off about the police raid by some moles in the police force, was prepared with his gang and opened fire on unsuspecting police personnel.

He fled the scene with his accomplices, leaving behind a trail of blood, rage, and horror.

The incident, first of its kind in Uttar Pradesh, led to nationwide outrage and cast aspersions on the Yogi Adityanath government and the state police force.

In another knee-jerk reaction, the police demolished Vikas's house in Bikru village a day after the massacre and trampled over his two vehicles and two tractors with an earthmover.

The action made political leaders like former Union Minister Salman Khurshid question the legality of the action and the action on his family earned him support from the Brahmin community.

Station officer Vinay Tiwari and inspector K.K. Sharma were suspended after their call detail records confirmed their conversation with the gangster. The two were arrested on Wednesday.

As investigations progressed, the political connections of Vikas grabbed headlines. His photographs with top political leaders across the political spectrum added to the discomfiture of the people in power and in the opposition.

Investigations revealed that Vikas had amassed wealth and property through deals in real estate, liquor business and contracts.

Political parties indulged in mudslinging and played the blame game as the STF hunted down and killed his lieutenant Amar Dubey on Wednesday in Hamirpur and Bauan Dubey in Etawah. Prabhat Mishra, who was arrested from Faridabad on Wednesday, was shot dead in an encounter on Thursday - ironically, at the same spot where Vikas Dubey would later be felled on Friday.

Vikas, meanwhile, remained elusive for the police. Fifty teams of state police and Special Task Force raided all his hideouts and picked up his relatives in an attempt to mount pressure on the gangster.

The borders of the state were sealed and frantic searches were carried out on the highways while Vikas remained holed up in a relative's house in Kanpur itself for two days.

He then managed to reached Faridabad where he was caught in a CCTV camera at a hotel. The police reached after he had left.

Every move of Vikas was hungrily lapped up by the media, turning the gangster into a much-dreaded don almost overnight.

Even as the police continued its attempts to arrest the gangster, Vikas quietly slipped into Madhya Pradesh and then to Ujjain. On Thursday morning, he went to the famous Mahakaal temple where he revealed his identity and got himself arrested.

The Madhya Pradesh police claimed the credit for his arrest and Vikas was handed over to the UP STF on Thursday night.

He had reached Kanpur on Friday morning when the SUV he was being brought in overturned and he was killed while trying to flee.

When he died, Vikas had completed his journey form a nonentity to a much-dreaded gangster—all in a week, from Friday to Friday.

Also Read | 'But What About Those Who Gave Patronage?': Opposition Questions Govt Over Vikas Dubey's Killing