Gangster Vikas Dubey was shot dead by police who claim he was trying to flee after the car carrying him from Ujjain overturned on the outskirts of Kanpur. 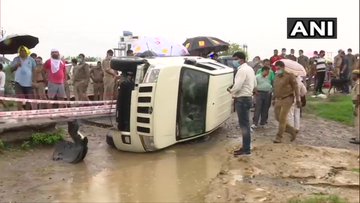 The alleged encounter in which Vikas Dubey was shot dead on Friday morning has raised several questions about the police’s version of the sequence of events that led to the gangster’s killing.

The police said the car in which Dubey was being brought to Kanpur from Madhya Pradesh met with an accident as it skidded off the road and overturned.

The car in which Vikas Dubey was seated (ANI/Twitter)

Police also said Dubey, who was arrested Thursday in Madhya Pradesh, snatched the rifle of a policeman and tried to flee. In retaliation, they said, he was shot at. Dubey was taken to hospital where he succumbed to his injuries. 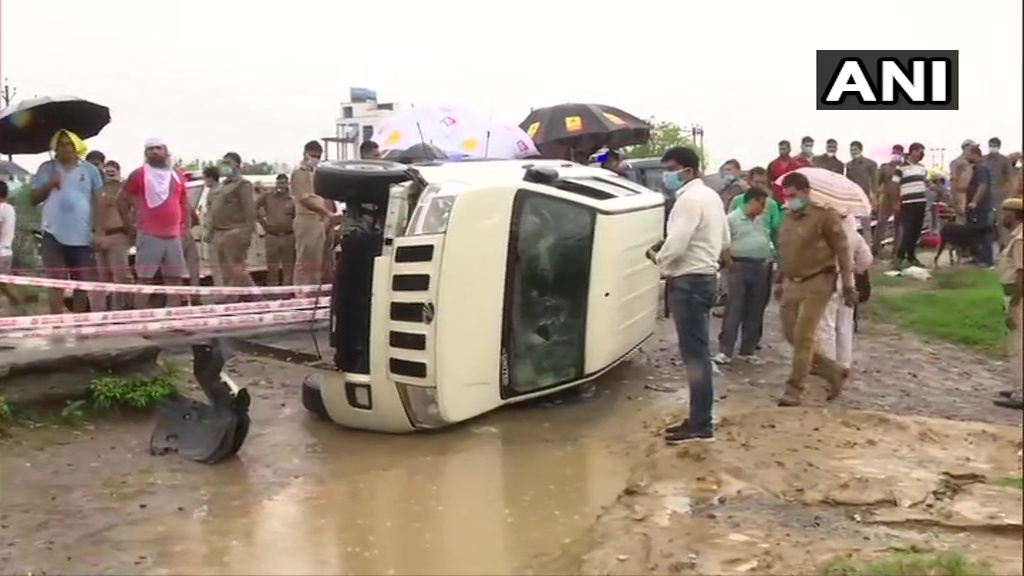 The overturned car, according to the police,  in which Vikas Dubey was being brought to Kanpur (ANI/Twitter)

However, the videos that emerged on social media have deepened the mystery surrounding the gangster’s killing. A video shows a car, in which Dubey is seated, crossing a toll booth. But the car was different from the one that had overturned on the highway and in which the gangster was said to be seated.

#WATCH Media persons, who were following the convoy bringing back gangster Vikas Dubey, were stopped by police in Sachendi area of Kanpur before the encounter around 6.30 am in which the criminal was killed. (Earlier visuals) pic.twitter.com/K1B56NGV5p

Also, the media persons who were following the convoy bringing back Dubey were stopped by police in Sachendi area of Kanpur minutes before the alleged encounter around 6.30 am.

Hours before he was shot dead in what police said was an encounter, a  petition in the Supreme Court had expressed apprehension of Dubey's ‘encounter killing’ and sought a CBI probe into the matter. The plea was moved on Thursday evening by advocate and petitioner-in-person Ghanshyam Upadhyay seeking urgent hearing on the matter. He had also sought directions for the Uttar Pradesh government to conduct a thorough investigation into the alleged encounter of five aides of gangster Vikas Dubey who might have been involved in the killing of eight policemen in Kanpur on July 3.

A retired DGP, meanwhile, said that Vikas had been eliminated to save some political leaders.

"The entire scenario is crystal clear. His photographs with politicians, top government officers had been going viral on the social media and it is obvious that he was better dead than alive. The people know what is the truth and the issue will snowball into a major controversy," he told PTI.

Senior Congress leader Jitin Prasada said: "With the end of Vikas Dubey in custody, the government has ensured that the trail which would have exposed his nexus with people in positions of power who allowed criminals like him to flourish, has ended too."