National For Next 50 Years, Nobody Will Be Able To Dislodge BJP Govt In Centre, UP: Dy CM Maurya

For Next 50 Years, Nobody Will Be Able To Dislodge BJP Govt In Centre, UP: Dy CM Maurya

Keshav Prasad Maurya's claim was similar to what Union Home Minister Amit Shah had said in September 2018 as the BJP president while addressing the party leaders in the national executive meeting in New Delhi. 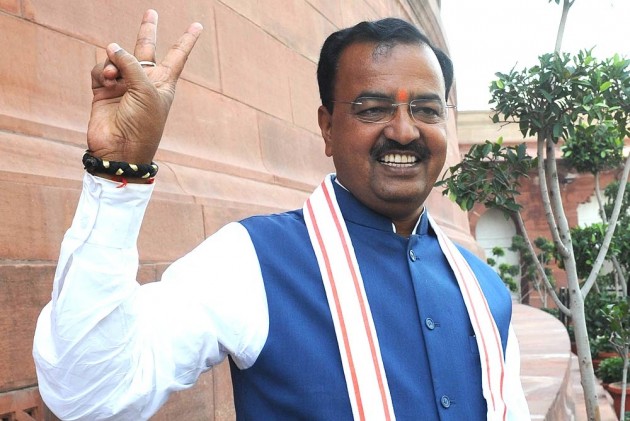 No party can dislodge the BJP from the Centre or Uttar Pradesh for next 50 years, claimed Deputy Chief Minister Keshav Prasad Maurya Sunday.

Exactly a month after the BJP's impressive win in the Lok Sabha polls, Maurya also predicted that there was no future for the SP, BSP or the Congress in the state.

"I can say with full confidence that for the coming 50 years, I cannot see any future for the SP, BSP and the Congress in UP. In the coming 50 years, nobody will be able to dislodge BJP governments both at the Centre and in the state," said the deputy chief minister Maurya.

Maurya's claim was similar to what Union Home Minister Amit Shah had said in September 2018 as the BJP president while addressing the party leaders in the national executive meeting in New Delhi.

BJP general secretary Ram Madhav too had made a similar claim earlier this month.

Maurya boasted about the BJP's future prospects while addressing a meeting of the party's backward class unit.

Addressing the party's function, the deputy chief minister also accused the SP, BSP and Congress of never respecting people belonging to other backward classes and only exploiting them.

Taking a dig at SP chief Akhilesh Yadav, Maurya said, "Akhilesh Yadav has now been reduced to being a leader of only a section of the Yadavs' community. He is no longer a leader of the backward class."

Mocking at the post-poll collapse of the SP-BSP alliance, Maurya said, "It seems the SP and BSP are no longer on talking terms (SP BSP mein kutti ho gayee hai)."

Maurya also said there had been some lapses on the part of the party, otherwise both the SP and BSP would have been wiped out in the Lok Sabha polls.

"By helping the lotus bloom in Amethi, the party workers have categorically stated that the Congress story in UP has ended," he said.

Maurya also exhorted the party workers to gear up for the party's enrollment drive.

"No one is untouchable for us. For Akhilesh Yadav, Mayawati and Rahul Gandhi there could be some untouchables, but not for the BJP. We believe in 'sabka saath, sabka vikaas, sabka vishwaas," he said.

The deputy chief minister also exhorted party workers to strive for the BJP winning at least 300 seats in Uttar Pradesh in the 2022 assembly elections.