With this, in total five border points, including Singhu and Tikri, have been closed due to the protest. 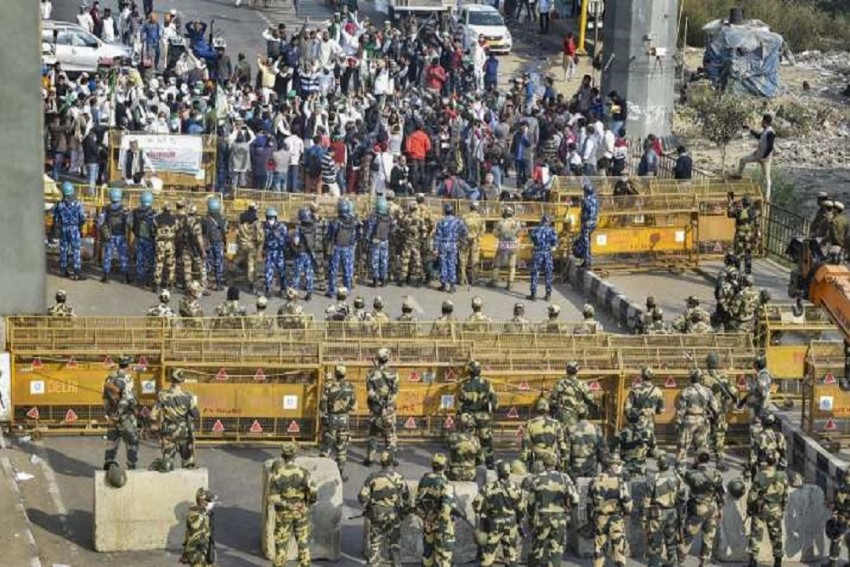 The national capital's border points were under heavy police deployment on Tuesday with concrete barriers and multilayered barricades put in place as farmers agitating against the Centre's new agri laws blocked the Delhi-Noida border.

Two more border points connecting the national capital with Gurgaon and Jhajjar-Bahadurgarh were closed as precautionary measures, leading to heavy traffic jams in several parts of the city.

With this, in total five border points, including Singhu and Tikri, have been closed due to the protest.

The protest by farmers at the Delhi border points entered the sixth day and is set to continue as the critical talks between three Union ministers and farmer groups ended in a stalemate on Tuesday after they rejected the government's suggestion of a new committee to look into issues raised by agitating farmers.

The two sides, however, decided to meet again on Thursday.

Earlier in the day, Bhim Army chief Chandrashekar Azad joined the protesting farmers at the Delhi-Ghazipur border along with hundreds of his supporters and demanded that the new farms laws be withdrawn immediately.

Also, Bilkis Dadi, the octogenarian who was the face of the months-long anti-citizenship law protest in the national capital and featured in the Time magazine, was stopped by the Delhi Police personnel at the Singhu Border where thousands of farmers have been demonstrating, officials said.

Bilkis, popularly known as the Shaheen Bagh Dadi, had expressed her willingness to join the farmers' protest at the Delhi-Haryana border at Singhu.

On Tuesday afternoon, hundreds of farmers gathered at the Noida and Delhi border on Tuesday, stopping traffic movement on a key route connecting Uttar Pradesh with the national capital, officials said.

"The Chilla border that links Delhi to UP through Noida has been closed. Those drivers who want to go to Noida can take U-turn from under the Ghazipur-Akshardham flyover and also through Sarai Kale Khan," the Delhi Traffic Police tweeted. Its Noida counterpart also took to Twitter to caution commuters.

On Sunday, the protesting farmers had threatened to block five border entry points of the national capital.

The Jharoda border which connects Delhi with Jhajjar-Bahadurgarh was closed by the Delhi Police for traffic movement and the commuters were suggested to take alternative routes.

A senior police officer said, "We received inputs that some farmer groups may try to block the road, so as a preventative measure, we have closed the Jharoda border to avoid any untoward incident."

"We have also enhanced our security arrangements at the border with multiple barricades. At present, the situation is under control and there are no protestors at this border point."

The officer added that Jhatikra border which connects Delhi with Gurgoan has also been closed after the farmers threatened to block the entry points to Delhi but there are no protestors here.

According to police, checking of vehicles has also been intensified at the border points as a precautionary measure in view of the "Delhi Chalo" protest march by farmers.

Cemented barriers and multilayered barricades have been put up besides heavy security deployment at Ghazipur border near the UP gate where many farmers have been protesting since Saturday, a police officer said.

Protesting farmers said they will not go back to their home until their demands are fulfilled by the Centre.

Jagtar Singh Bhagiwander, who has been agitating at Tikri for the last six days, said, "No matter what, we are not going to move from here. We will continue our agitation and wait till December 3. We want the centre to take back the new farm laws."

"We won't step back unless are demands are met. We have support of farmers from across the country be it Haryana, Rajasthan, Madhya Pradesh and Himachal Pradesh," he said.

Students from Delhi put up posters and pictures at Singhu Border to highlight the plight of farmers across the country and create awareness on a range of issues.

Ravinder Singh (22), a student of Law Faculty at Delhi University, said many issues are ailing the country and the students want to create awareness about them.

Meanwhile, officials on Tuesday said the Delhi government has notified one of the three central farm laws and was examining the remaining two.

The ruling AAP in a statement said, "Laws have already been passed in Lok Sabha, Rajya Sabha and have been signed by the president. These are now laws in the entire country. No state has the power to independently implement or reject these laws."