The BJP's Bengal unit president also said cow was "our mother" and threatened action against those who "misbehave" with them. 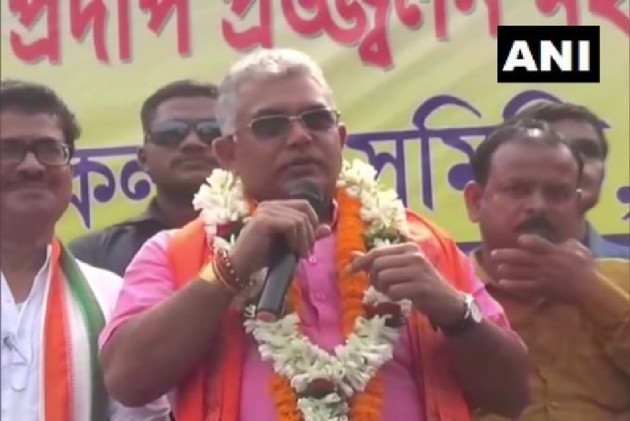 West Bengal BJP unit president Dilip Ghosh has attacked a "few intellectuals" for eating beef on roads and asked them to consume "dog meat" at their homes.

"Few intellectuals eat beef on roads. I tell them to eat dog meat too. Their health will be fine whichever animal they eat, but why on roads? Eat at your home," he said at a cow-related religious event called Gopa Ashtami in Burdwan district on Monday.

Underlining that consuming beef was a 'crime', he also said that cow is "our mother" and threatened action against those who "misbehave" with them.

"If anyone misbehaves with my mother, I will treat them the way they should be treated. On the holy soil of India, killing cows and consuming beef is a crime," he said.

Ghosh also said cows in the country produce milk which has gold in it and also added that foreign breeds are not "our gaumata" but "aunties".

"The country's own breed of cows have a special characteristic. There is gold mixed in its milk and that is why the colour of their milk is golden. There is a 'nari' (blood vessel) that helps produce gold with the help of sunlight. So, we have to keep those (local) cows. If we drink 'desi' cow milk, we will become healthy and can prevent diseases," he said at a 'Gopa Ashtami' programme here.

"The breeds of cows that we bring from abroad are not cows. They are a kind of janwar (beast). These foreign breeds don't sound like cows. Those are not our gaumata, but our aunties. It is not good for the country if we worship such aunties," he said.

The BJP leader's comments have at a time when cow-related violence has reportedly increased in the country. About 280 people have been injured in more than 100 attacks between May 2015 and December 2018, according to a report by the Human Rights Watch.

Even after the BJP government announced a nationwide ban on cow slaughter in May 2017, Ghosh's own state West Bengal is one of the exceptions where it is still legal.

The chairperson of Rashtriya Kamdhenu Aayog, Vallabh Kathiria, told IndiaSpend in an interview that the commission will review state laws related to the protection of cows and ensure that cow slaughter is stopped in states where it is still legal. These states are--Kerala, West Bengal, Arunachal, Mizoram, Meghalaya, Nagaland, Tripura and Sikkim.

Ghosh is not new to controversies.

In September, Ghosh had claimed that "bribe" worth Rs 2 lakh was being offered to prove people were committing suicides in West Bengal due to National Register of Citizens (NRC).

Earlier this year, a case was registered against the West Bengal BJP chief for reportedly asking his party workers to beat up their TMC counterparts and police. He made the purported comment in connection with clashes between TMC and BJP party workers in the state.