Congress also claimed 'invisible powers' in Delhi are trying to ensure that the Rajasthan Governor does not convene a session of the state assembly. 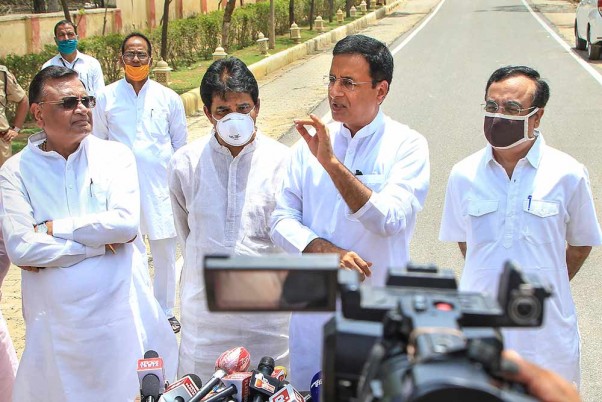 Scores of Congress workers staged demonstrations against the BJP on Saturday, accusing it of "conspiring" to topple the Ashok Gehlot government.

The Congress had on Friday given the call for demonstrations in all district headquarters against the "conspiracy to murder democracy" and to press the governor for convening an Assembly session.

The Congress government is pushing for a session of the Assembly so that Chief Minister Ashok Gehlot can prove his majority on the floor of the House after the Rajasthan High Court on Friday ordered that status quo should be maintained on the disqualification notices sent out by the Speaker to rebel leader Sachin Pilot and 18 other MLAs.

In Jaipur, the demonstration was held at the Youth Congress office.

Party leaders addressed the gatherings across the state.

"The BJP's intentions will not work out and the Ashok Gehlot government will complete its tenure. It is also disappointing that the Governor is not calling an Assembly session. The session should be called,” a party leader said in Bikaner.

Congress workers took out a rally in Kota and staged a dharna in Jodhpur. Similar protest demonstrations were held elsewhere in the state.

Giving the call for demonstrations, state Congress president Govind Singh Dotasara had on Friday said the programmes would be held following COVID-19 preventive measures such as social distancing.

He said that not more than 50 persons would gather in any place.

However, Congress workers gathered for the demonstrations in large numbers in all district headquarters disregarding social distancing norm.