'Very recently there have been very disturbing reports on how national security has been so thoroughly compromised,' Sonia Gandhi said. 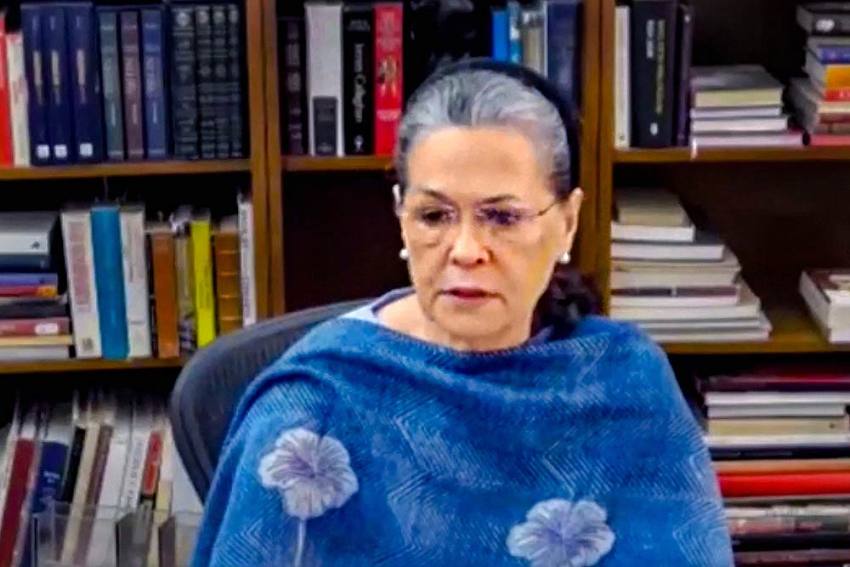 At the meeting, CWC passed a resolution demanding a Joint Parliamentary Committee (JPC) probe on an alleged breach of national security, violation of Official Secrets Act over leaked WhatsApp chat of Arnab Goswami.

"CWC has decided that there will be new elected Congress president in June 2021," party leader KC Venugopal.

In her opening remarks, on the purported WhatsApp chat leaks of Arnab Goswami, she said, "There have been very disturbing reports on how national security has been so thoroughly compromised."

"Very recently there have been very disturbing reports on how national security has been so thoroughly compromised.  I think just a few days back, AK Antony-ji had said that leaking of official secrets of military operations is treason. Yet the silence from the Government’s side on what has been revealed has been deafening.  Those who give certificates of patriotism and nationalism to others now stand totally exposed," she said.

She said that the government has shown shocking insensitivity and arrogance on farmers issue through a charade of consultations.

"It is abundantly clear that the three laws were prepared in haste and Parliament was consciously denied an opportunity for examining in any meaningful details their implications and impacts," Sonia Gandhi said.

Gandhi expressed the hope that the process of the COVID-19 vaccination drive will continue and be completed to the fullest extent.

The government, she added, has inflicted untold suffering on the people of the country by the manner in which it has managed the COVID-19 pandemic. "It will take years for the scars to heal," she alleged.

The economic situation remains grim and large parts of the economy like MSME and the informal sector have been decimated with the government refusing to extend a lifeline, the Congress president said.

"When public expenditure has to be carefully prioritized, it is very painful to find huge amounts of money being allocated and spent on initiatives that can only be described as 'personal vanity projects'," she said.

"Panic privatization has gripped the government and this is something that the Congress party can never accept and support," Gandhi added.

The crucial meeting, being held virtually, will also finalise the plan for organisational elections, including that of the next Congress president.

The virtual meeting started with the address of party chief Sonia Gandhi, who is chairing the meeting.

The CEC chaired by Madhusudan Mistry has proposed that the AICC Session and the party president's election be held on May 29, the sources told PTI.

Members of the CWC will finalise the schedule for organisational elections and the AICC plenary session.

The party's top leadership also discussed the current political situation in the wake of the farmers' agitation and the party's strategy ahead of the Budget session of Parliament on issues including the WhatsApp chat leaks of Arnab Goswami.

Sonia Gandhi took over as interim Congress president in August 2019 after Rahul Gandhi resigned in the wake of the party's Lok Sabha debacle in May 2019.

There have been demands from a section of the Congress leaders for having a full-time and active party president and an organisational overhaul.

The CWC had in its earlier meeting decided to hold organisational elections, following a storm in the party in August last year over a letter to Sonia Gandhi by a group of 23 leaders including Ghulam Nabi Azad, Anand Sharma, Bhupinder Hooda, Prithviraj Chavan, Kapil Sibal, Manish Tewari and Mukul Wasnik raising these issues.

Sonia Gandhi had last month met some of these 'letter-writers' and discussed the issues raised by them.