The CBI approached the Supreme Court saying Kolkata Police commissioner Kumar was a potential accused in the Saradha chit fund scam and claimed the local police could be destroying crucial evidence. 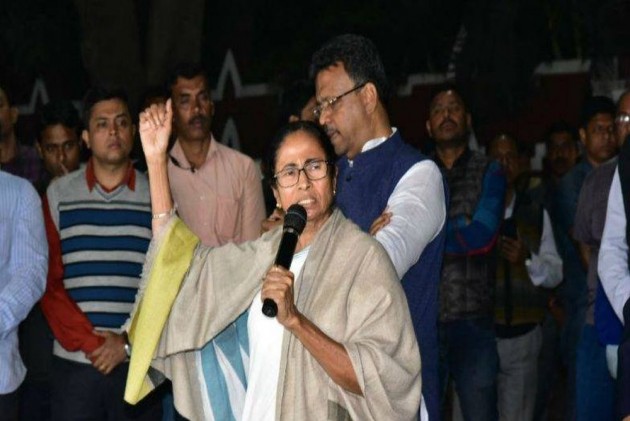 The Supreme Court on Tuesday will take up hearing the CBI’s plea against Kolkata Police Commissioner Rajeev Kumar.

The case is expected to come up for hearing before a bench headed by Chief Justice of India Ranjan Gogoi and Justice Sanjiv Khanna and 10.30 am.

The CBI had approached the Supreme Court on Monday, saying it “apprehends” Kumar is “destroying electronic evidence” and he should be directed to “immediately surrender/make himself available” for investigation.

West Bengal Chief Minister Mamata Banerjee, meanwhile, is still on strike in Kolkata against the CBI’s move to question Kumar. The West Bengal government had moved the Calcutta High Court Monday against the same.

A political firestorm raged on Monday with the West Bengal Chief Minister declaring her agitation to save the "Constitution and country". Speaking to the media, Banerjee said, 'she will go on and she was ready to face the consequences'.

Virtually all opposition parties rallied behind Banerjee's direct confrontation with the Modi government, even as the BJP called it an "alliance of corrupt" and Home Minister Rajnath Singh told Parliament that developments in West Bengal were indicative of a "breakdown of the Constitution".

Trinamool workers took to streets burning effigies of Prime Minister Narendra Modi and BJP chief Amit Shah and blocked trains, while the BJP lined up its top leaders to step up the counter-offensive against Banerjee and other opposition leaders.

The ripple effect of political tremors in West Bengal were felt in several state capitals, as Banerjee's combative posturing on the issue drew support from several regional satraps trying to sew up an anti-BJP alliance ahead of Lok Sabha polls, expected in April-May.

Refusing to budge, Banerjee held her Cabinet meeting at the protest site and also gave police gallantry awards there.

"This is a satyagraha and I'll continue (it) till the country is saved... Constitution is saved," the firebrand TMC boss said at the protest site.

The tense standoff between the CBI and the Kolkata police for the second day echoed in Parliament and led to a washout of the proceedings following opposition protests.

“A clash like this, between law enforcement agencies, is not only unfortunate but is also dangerous for the country’s federal and political system,” Union home minister Rajnath Singh said amid loud jeers by Opposition MPs in Lok Sabha.

"Whatever happened on Sunday indicates a constitutional breakdown," he said.

In addition to Singh, a bevy of Union ministers and BJP leaders attacked the Trinamool chief for her protest. “The CM is protesting because Kolkata Police commissioner Rajeev Kumar seems to be aware of many secrets and needed to be saved,” said Union minister Ravi Shankar Prasad at a press conference.

His Cabinet colleague, Prakash Javadekar, too attacked Banerjee during a press meeting, while a third BJP minister, Smriti Irani, said the Bengal chief minister must “answer why she stands with scamsters”.

However, the West Bengal Chief Minister said the “Save Democracy” dharna would continue indefinitely but protest rallies will end on February 8, after which the administration will ban the use of speakers across the state due to school examinations that start from February 12.

"I do not have any grudge against any individual. But I am angry over the way institutions are being destroyed and misused," Banerjee told the gathering at the protest venue.

She said it was her government that arrested Saradha chairman Sudipta Sen and claimed Rs 250-300 crore was returned to the duped depositors.

The alleged ponzi scams at Saradha and Rose Valley groups are at the centre of what has become a major political controversy now, as the BJP leaders have alleged that the ruling party leaders in West Bengal have been among major beneficiaries of fraudulent collection of money.

Allegedly, these schemes were being run without necessary regulatory approvals and collected nearly Rs 20,000 crore from lakhs of investors in West Bengal and neighbouring states, through what is commonly known as 'chit funds'.

Several TMC leaders including parliamentarians like Kunal Ghosh, Srinjay Bose, Sudip Bandyopadhyay and Tapas Pal, and state minister Madan Mitra were arrested for their alleged links with the two groups.

"If you are labelling people who are honest as thieves without any evidence, then I will definitely stand by their side. And for that if I need to give up my life, then I am ready to do that but I will not compromise," she asserted.

Claiming that the CBI team had knocked on Kumar's door without a warrant, Banerjee said, "I have fought all through my life but never given up. I am ready to face any consequences."

The failed attempt by the CBI to question Kumar in connection with the Saradha and Rose Valley chit fund scams on Sunday became the latest flashpoint between the BJP-led Centre and Banerjee, one of its bitter critics. The CBI has accused Kumar of destroying evidence related to the two fraud cases.

A CBI team was bodily prevented from entering Kumar's residence by police personnel, bundled into vehicles, and detained. Police contingents also descended on CBI premises in Kolkata, as a furious Banerjee rushed to Kumar's residence before beginning a dharna opposite landmark Metro Cinema.

As political temperature soared, Banerjee told her supporters to keep the demonstration peaceful and not to burn any effigies.

"Save the Constitution, save the federal structure, save the police force, save the Indian Administrative Service and all ranks of civil service from disaster," read the banner that fluttered on the dais Banerjee has made her home since Sunday night.

Odisha's ruling party BJD, which had hitherto kept silent over the development, also threw its weight behind Banerjee.

"We are not a banana republic...," BJD leader B Mahtab said, adding the CBI was becoming a "political stooge and political weapon" in the Centre's hand.

Congress leader Mallikarjun Kharge charged that the government was using the CBI as a weapon to finish the Opposition and put in place an autocratic regime.

NCP leader Sharad Pawar, at whose residence leaders of opposition parties met, said what has happened to Mamata has happened in Delhi to Kejriwal also.