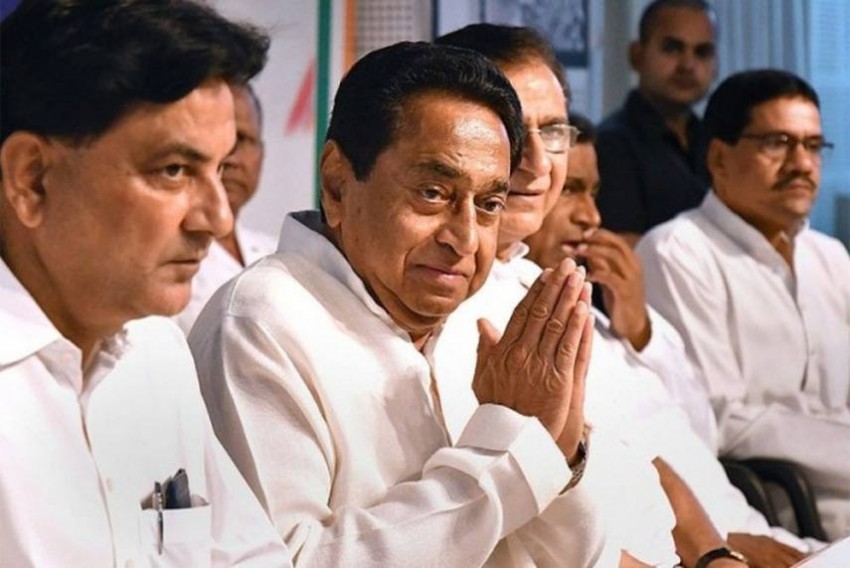 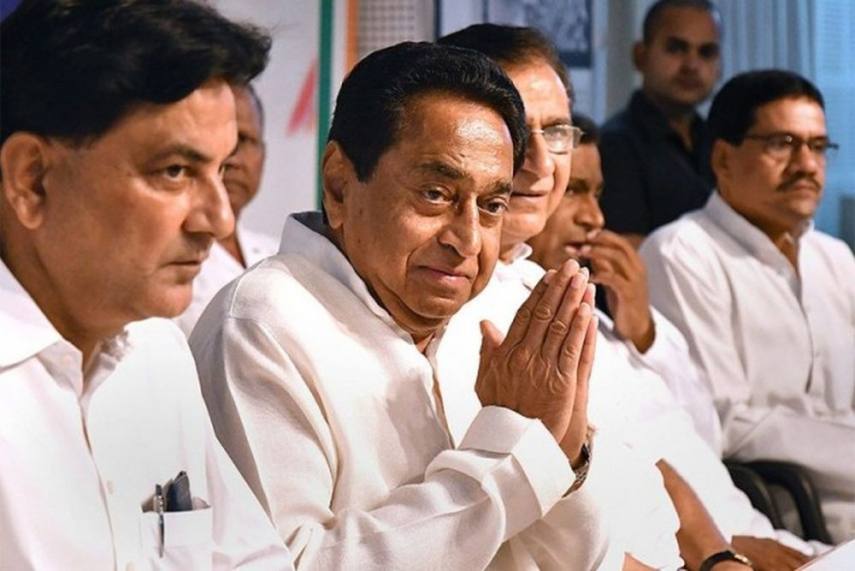 The political drama in Madhya Pradesh which began 48 hours back amid allegations that the BJP was trying to topple the Kamal Nath government could end in an anti-climax, Congress sources have told Outlook.

Sources say that though four legislators - Hardeep Dang, Bisahulal Singh, Raghuraj Kansana (all from Congress) and Surendra Singh 'Shera' (independent) - continue to remain incommunicado, the BJP may be in for a surprise over the next few days with some of its legislators willing to resign from their membership of the 230-member Madhya Pradesh Vidhan Sabha and then defecting to the Congress.

The developments come two days after former chief minister and Congress veteran Digvijaya Singh alleged that the BJP was trying to poach at least 10 MLAs (six from the Congress, two from the BSP, one SP and an independent legislator) supporting the Nath regime. The MLAs, Digvijaya had alleged, were ferried by BJP leaders in two chartered flights to Delhi late Tuesday night and then quarantined at a five-star hotel in Manesar, Haryana. Later, state ministers Jaivardhan Singh (Digvijaya's son) and Jitu Patwari arrived at the hotel, along with Digvijaya and managed to 'rescue' one of these legislators - BSP's Ram Bai Singh - while four MLAs - Bisahulal, Dang, Kansana and Shera - had reportedly been flown out to Bangalore.

By Wednesday evening, six of the 10 legislators had returned to Bhopal with Jaivardhan, Patwari and other Congress leaders while the party continued its efforts to reach out to the MLAs reportedly taken to Bangalore. Digvijaya had alleged that the BJP's move to topple the Nath government, which has a slender majority in the state assembly, had been hatched by former CM Shivraj Singh Chouhan and BJP leaders Narottam Mishra, Bhupendra Singh, Vishwas Sarang and Sanjay Pathak.

With the budget session of the state assembly scheduled to commence from March 16 and elections for three Rajya Sabha members from the state due on March 26, the Congress party is doing all it can to fortify its legislative strength in the Vidhan Sabha where it presently has 114 MLAs against BJP's 107. The simple majority mark in the Vidhan Sabha is 116 and the Congress has shored up its strength with the help of four independent legislators and MLAs from the BSP and SP.

Though Digvijaya and several of his party colleagues have told Outlook that there is no threat to the stability of the Kamal Nath government, reports of party legislator Hardeep Dang sending his resignation from the Assembly to Vidhan Sabha Speaker N.P. Prajapati on Thursday evening triggered some "preventive damage-control measures" by the Grand Old Party, sources said. Prajapati has told Outlook that he has only heard about Dang's resignation so far and will be able to take a call on it "only if the MLA hands it to me in person". P.C. Sharma, Nath's law minister told Outlook that Dang has not resigned and that the letter being circulated on social media is a forged one.

Nath was scheduled to visit Orchcha and then his constituency of Chhindwara later this week but cancelled the plans to stay put in Bhopal and oversee efforts of keeping the party's legislative bloc together. Sources say at a late night meeting convened by Nath at the CM House in Bhopal, he met BJP MLA Narayan Tripathi. Nath also spoke to BJP legislator Sharad Kol. Tripathi and Kol had created a stir within the BJP last year when they defied their party to vote in favour of the legislative business of the Nath government in the assembly. Sources say the duo have assured Nath that "if the situation arises, their services will be available to the Congress in future too". It is learnt that the Congress is also in touch with at least six other BJP legislators in the state.

Meanwhile, sources say the Congress government has also expedited investigations against senior BJP leaders including Shivraj Singh Chouhan (in an alleged afforestation project scam), Narottam Mishra (over irregularities in an e-transfer awarded during his term as a minister), Bhupendra Singh (in a land encroachment case) and Sanjay Pathak - leaders Digvijaya claimed were trying to dislodge the state government. Pathak, a former Congress leader who had switched to the BJP in 2009, is particularly vulnerable, say sources, due to his involvement in vast mining projects across M.P. Similarly, the state government is also mulling over the possibility of allowing a Lokayukta probe into complaints of financial irregularities by missing independent MLA Surendra Singh Shera which have been pending action for a while.

Evidently, the Congress is not averse to using the same tactics -- of using probe agencies against rivals -- it accuses the BJP of resorting to in times of political crises.

The BJP too is monitoring the evolving situation minutely. Sources say Union ministers Narendra Singh Tomar met several BJP leaders of the state at his residence in New Delhi late Thursday night to discuss the party's options in light of the fast-changing political developments.

Meanwhile, Digvijaya Singh, who is being projected as the saviour of Nath government for his proactive role in "retrieving" the legislators who the BJP was allegedly trying to poach, has returned to Bhopal from Delhi earlier today. Digvijaya is likely to remain in Bhopal and coordinate efforts to stave off any threats to the stability of the Congress government.

Notwithstanding the outcome of the ongoing power tussle, sources say the skirmishes within the Congress will continue. A definite marker of this, said a party veteran, was the silence of Congress leader Jyotiraditya Scindia. Scindia's unhappiness with Nath continuing as CM is no hidden secret in political circles and he has been eyeing the post of the state Congress chief - also held by Nath currently - ever since he lost the Lok Sabha polls from Guna last year. Scindia is also hopeful that the party will nominate him to the Rajya Sabha later this month. Given his expectations from the party, his absence from Bhopal during the ongoing crisis has allowed his detractors in the state to claim that the erstwhile Gwalior royal isn't concerned about the fate of the Congress if the party doesn't safeguard his personal political interests. To make matters worse for Scindia, his loyalist and party legislator Mahendra Sisodia has told reporters that "there will be no threat to the Kamal Nath government as long as Scindia is given the respect he deserves".

Sources say the Rajya Sabha polls later this month, in which the Congress hopes to wrest two of the three seats up for election, could decide the fate of the Nath regime. Both Scindia and Digvijaya are hopeful of being successfully elected from the state but an influential section within the party is learnt to be opposed to nominating Digvijaya to Parliament's upper house for a second term. It remains to be seen whether rejecting Digvijaya's claim would be in the interest of the party and also if Scindia will be placated just with a Rajya Sabha nomination.