The Congress has alleged that LS security personnel manhandled their women MPs during protest. 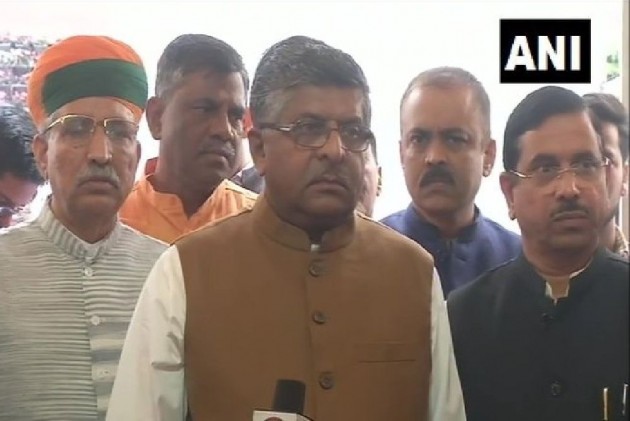 The BJP on Monday attacked the Congress for "unruly" behaviour of its MPs in Lok Sabha and asked all parties to come together to maintain Parliament's sanctity and great tradition.

Speaking to reporters, Law Minister Ravi Shankar Prasad hit out at the opposition party soon after Lok Sabha proceedings were adjourned due to vehement opposition by Congress members over the swearing-in of a BJP government in Maharashtra.

Congress members jostled with the marshals in the Lok Sabha when they stormed the Well of the House carrying placards with regard to Maharashtra government formation, leading to adjournment of Parliament proceedings.

The Congress alleged that their women parliamentarians were manhandled by security personnel during the protest.

"Security personnel manhandled our women parliamentarians. We have never experienced this inside Parliament. We will be waiting to see what action is been taken against responsible people," Congress leader Adhir Ranjan Chowdhury told reporters.

Congress MP from Tamil Nadu Jothimani alleged that she was "manhandled".

"It is sad that Ramya Haridas and me (sic) were manhandled, we have lodged complaint with the speaker," she told reporters.

The Maharashtra government formation issue rocked the Lok Sabha on Monday, with Congress leader Rahul Gandhi saying democracy was "murdered" in the state.

Prasad also said that it is the Congress, not the BJP, which "murdered" democracy in the state.

The minister asserted that popular mandate was in favour of a BJP-Shiv Sena government under Devendra Fadnavis but the Congress "stole" it by joining hands with the Sena which, he added, is driven by political greed and opportunism.