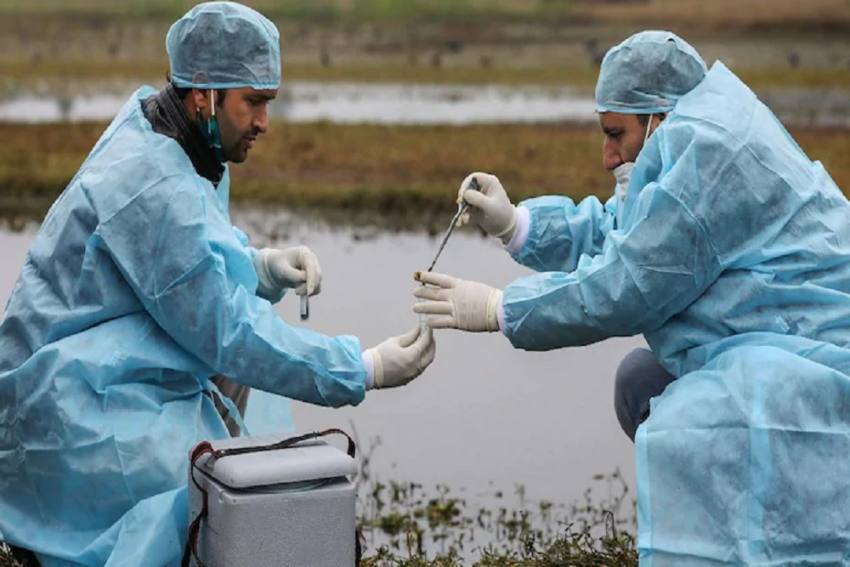 Jharkhand and Uttar Pradesh reported more bird deaths on Tuesday, two among 10 states grappling with the outbreak of avian influenza.

The Centre, meanwhile, said it has issued advisories regarding testing protocols and maintaining sufficient stock of PPE kits required for culling operations.

In Uttarakhand, where nearly 300 birds, mostly crows, have died over the last few days, a high alert has been sounded after samples tested positive for the influenza, while in Maharashtra, a culling exercise was ordered in parts of Latur district.

"Till January 12, 2021, additional cases of avian influenza (H5N8) has been confirmed among dead crows in HCL-Khetri Nagar in Jhunjhunu district of Rajasthan," the fisheries, animal husbandry and dairying ministry said in a statement.

The avian influenza strain H5N1 has also been confirmed in dead crows and a pelican at the zoological park in Kanpur in Uttar Pradesh as well as in dead crows in Jagnoli and Fatehpur village in Himachal Pradesh's Kangra district.

The confirmation of H5N1 in poultry samples from Madhya Pradesh's Jhabua district was received on Tuesday from the National Institute of High Security Animal Diseases (NIHSAD) in Bhopal, it said.

"The department of animal husbandry and dairying has issued an advisory on testing protocols to states, encouraging them to undertake screening at the state level ensuring suitable bio secure facilities," the statement said.

The ministry said that states have been advised to maintain sufficient stock of Personal Protective Equipment (PPE) kits and accessories required for culling operations.

In Jharkhand, a large number of crows, mynas and herons were found dead at a village in Dumka district, officials said.

Samples have been collected and sent for examination to Ranchi, he said, adding that the test reports would confirm if it is bird flu or there was any other reason for the deaths.

The dead birds have been buried with all precautions and people have been urged to remain vigilant about such incidents, Singh said.

The administration in Maharashtra's Latur district has ordered culling of birds in Kendrewadi and Sukni villages after samples collected from these areas were found positive for bird flu, an official said.

Latur district collector Pruthviraj BP has ordered culling of birds in an 1km radius from where birds infected with avian influenza were found in these villages.

Officials said that at least 225 birds have died in Kendrewadi till Monday, while 12 hens have died in Sukni and four in Wanjarwadi of Udgir taluka.

Talking to reporters, the minister also said that a mention will be made in this regard in the forthcoming budget of the state government.

Following the confirmation of avian influenza in Uttar Pradesh with the samples of a couple of dead birds in the Kanpur zoo found positive for the disease, the administration in Hamirpur, Chitrakoot and Banda districts in Bundelkhand are exercising extreme caution.

Some herons and crows were found dead near the Bharua Sumerpur railway station in Hamirpur.

Veterinary officer Pankaj Sachan said the birds possibly died due to excessive cold, but "even then the samples have been sent for examination". The carcasses of the birds were burnt and buried.

He also informed that serum samples of hens from farms have been sent to the Indian Veterinary Research Institute (IVRI) Bareilly for testing. People consuming eggs and chicken have been advised to cook the food at a temperature of at least 70 degrees Celsius.

In Chitrakoot, four teams have been formed to tackle bird flu and around 200 hens in different farms of Bargarh and Ahmadganj were culled on Monday.

In Shamli district, a college in was shut for a day for sanitisation after the carcass of a migratory bird was found in its compound, amid the outbreak of bird flu in the state. Sample has been sent for testing, officials said.

High alert has been sounded across Uttarakhand with the samples of two dead crows testing positive for bird flu in the state.

With the confirmation of bird flu in Uttarakhand a high alert has been sounded across the state, state animal husbandry minister Rekha Arya said.

"However, so far bird flu has been confirmed only in wild birds in Uttarakhand. The poultry sector is by far free from the virus," Arya said.

Nearly 300 birds mostly crows have been found dead in different parts of Uttarakhand, including Dehradun, Rishikesh and Kotdwar over the past few days. While a majority of the carcasses have been safely buried, some of them have been sent for testing to NIHSAD and IVRI.

Telangana animal husbandry minister T. Srinivas Yadav said there is no bird flu in the state and various preventive measures have been initiated. There is no harm in consuming chicken and eggs, he said.

Yadav held a meeting here with the representatives of poultry industry, scientists and animal husbandry officials along with state health minister Eatala Rajender as per the directives of Chief Minister K. Chandrasekhar Rao, an official release said.

The minister said 276 samples tested in Nalgonda, Peddapalli and Warangal districts following reports of deaths of chickens turned out to be negative. Another 1,000 samples tested during the last three days have also been found negative.