Bikini Babe To A Public Kiss: 5 Dirty Instances When Women Politicians Were Shamed

The plight of the Indian women politicians is to be felt to be believed. They may be worshipped as Laxmi, Saraswati and Durga inside the house but the treatment meted out to them while on election campaigns is just atrocious. 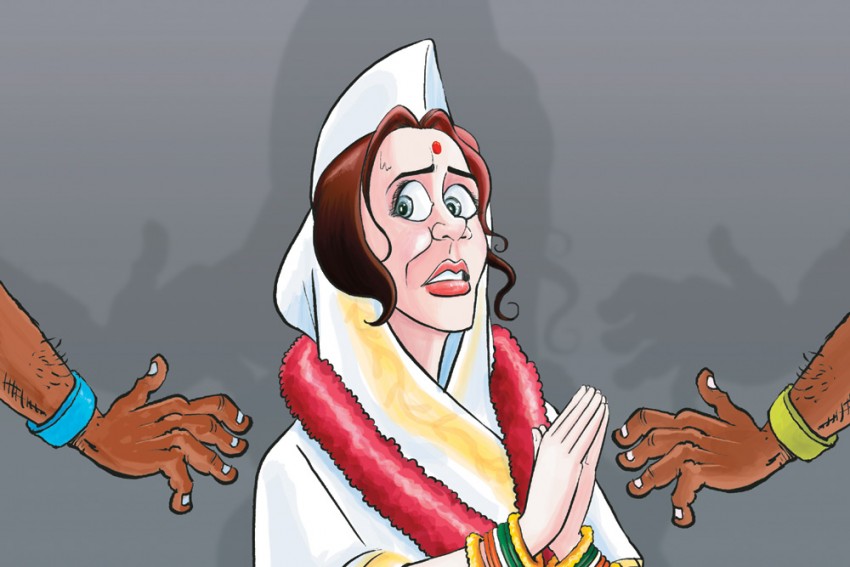 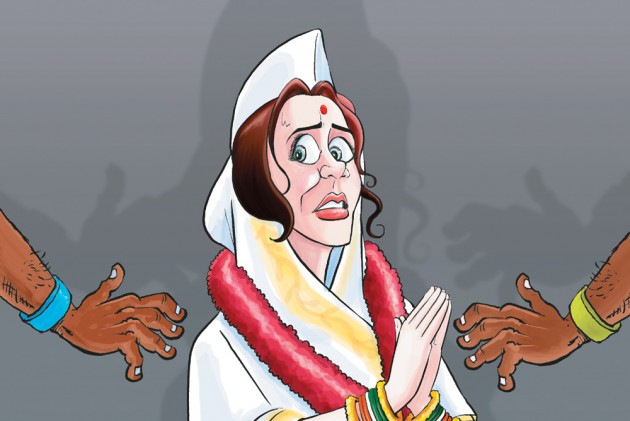 Just like in every other sector in public life, a kind of force works against women in politics that males won’t ever face. This entrenched misogyny is persistent and present all the time, and it ranges from benign neglect to outright malevolence. The fact that India has had, and still has, powerful women in leadership positions hardly negates that truth. For, each one of them has faced it—from Indira Gandhi, to Jayalalithaa, to Mayawati now. And the worst humiliations come when women enter that rough and tumble of election campaigns. What apparently powerful women go through in public is no different from what anonymous women face on a daily basis.

Here are five instances when women politicians braved the odds. A compilation from Outlook's cover story this week, 'Manhandled':

1. You would be mistaken to think male-supremacist attitudes kick in only when women candidates come with a ‘glamour quotient’, an easy way to tarnish them as non-serious politicians. Take the articulate Ranjeet Ranjan, she may have made a powerful statement by riding a Harley Davidson to Parliament but admits she wouldn’t dream of doing so while campaigning in her socially conservative constituency, Supaul in Bihar. If sexual targeting is the extreme end, swimming against the tide of gender-scepticism is the norm. Ranjan says she has had to prove herself “doubly more” than a man to reach a position where she is respected. “Party workers try to dominate you when you are a novice. They try to plan your schedule as per their convenience. I have had party workers barging into my bedroom in earlier days,” says Ranjan.

2. Khushbu Sundar is another one not easily daunted. She recently slapped a man who groped her in a crowded election rally. “He probably expected me not to react. But I am someone
who reacts instantly. Even when I was in the DMK, a similar thing had happened. Even then I turned around and slapped the offender,” says the plucky actress-turned-politician about the incident in Bangalore.

3. Women candidates remain vulnerable to the patriarchal overreach of the political bosses, while also facing challenges on the campaign trail that their male counterparts wouldn’t.
They are susceptible to being groped in crowded public places and bear the brunt of sexist and misogynistic remarks. Says Priyanka Chaturvedi: “Azam Khan made highly derogatory re-
marks. The worst is that the others present there cheered. A woman can be attacked because of her gender, her character assassinated and her credentials questioned so as to
reduce her value in eyes of the electorate.”

4. One can be ambivalent about the whole idea of celebrity candidates — especially when glamour is part of the persona—but they do start with a distinct advantage. Jahan admits her star value is what’s getting the crowds. “That’s exactly what is happening. But now they are coming to see me with an intent that I would prove to be a leader and a better representative for them,” she says. But along with fans on the roads, there also come the trolls. Nushrat saw “bikini” pictures of her floating around online after her candidature was announced. She retorts: “The bikini photos were not mine. Come on, I don’t have a bikini body to show in the first place. Obviously they are morphed,” she tells Outlook.

5. Fake news and rumours have tagged along too during election time. Social media has played a negative role too. “There’s a picture of mine meeting an old, ailing maulana sahab. They put an arrow from his eyes pointing to my breast,” says Sushmita Dev, MP from Silchar and the president of the All India Mahila Congress. On February 2, Latehar police arrested a man claiming to be a ‘Modi bhakt’ for tweeting a morphed image of Priyanka Gandhi. Morphed pictures of Gandhi with a cross around her neck have circulated on social media. “During my own election, someone posted something very communal against me on Facebook. I went to the EC office and was told that there is no magistrate available since they’re all preparing for elections. We don’t have the legal mechanism to act fast against digital slander. By the time social media platforms intervene, the damage is done,” says Sushmita.