There were celebrations in parts of Jammu as the government scrapped Article 370. 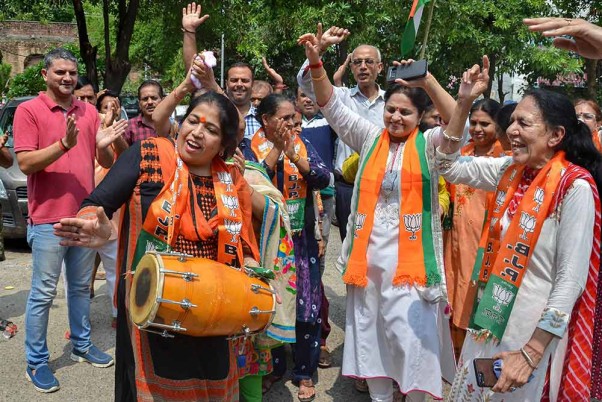 There were celebrations in parts of Jammu as the government abrogated Article 370 of the Constitution that granted special status to the state.

People hailed Centre’s move and termed the decision as “historic”.

"It's a historic day in Jammu and Kashmir and dream come true. For 72 years, we have been fighting its abrogation as it allowed perpetuation of the Kashmiri hegemony and throttling of 'nationalistic' forces. It will end decades long discrimination with West Pak Refugees and females of the state married outside the state," said former deputy chief Nirmal Singh.

"Today is a historic day. It's undoing of the ' blunder' committed by late PM Pandit Nehru in connivance with late CM Sheikh Abdullah. It's a historic day for the 'nationalistic' forces which sacrificed a lot in the last 72 years," said Prof(Retd)  Hari Om, member Ikk Jutt Jammu, who was earlier with the BJP.

"Today we are fully emotionally integrated with India. We may not have been fully empowered but yes do feel emancipated.  It's not only a historic but a game changer.  It's an end of feeling of 'subjugation' and ' second-class' citizen," he said.

"It was darkest day in our life when we decided to settle in Jammu after coming from Sialkote. We have been cursing all our life for that decision. Some of us who got settled in Delhi or Punjab even became PM and here we can't even become peon in state government. It was slavery at its worst.  Today, we get a feeling being Indian citizen in letter and spirit. It's an end of our 70-year exile," said 80-year-old Ratno Devi, a west Pak refugee.

After the Union Cabinet met on Monday morning, Shah announced in the Rajya Sabha that provisions of Article 370 were being scrapped.

He said the Ladakh division of Jammu & Kashmir would be made a separate Union Territory without a legislature, a longstanding demand of the people of that region.

Jammu & Kashmir would be a separate Union Territory and it would have a legislature, he said.