Police said a special investigation team is handling the interrogation of the 'arrested accused officer'. 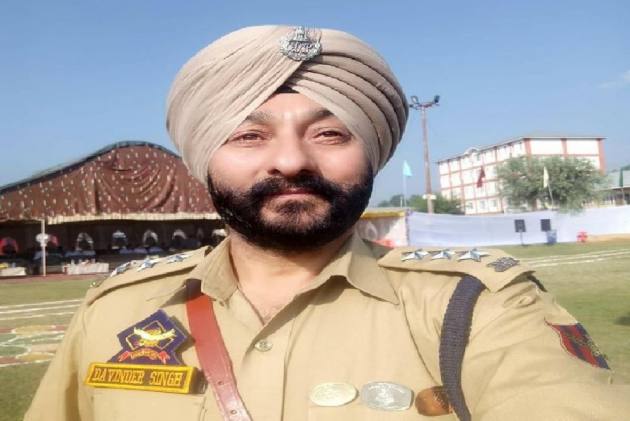 Jammu and Kashmir Police on Tuesday said that Deputy Superintendent of Police (DSP) Davinder Singh, who was arrested a few days ago along with two militants, has not been awarded any gallantry or meritorious medal by Ministry of Home Affairs (MHA).

The police added that the only gallantry medal awarded to Singh during his service was by the erstwhile J&K State on Independence Day in 2018.

"It is to clarify that Deputy SP Davinder Singh is not awarded any Gallantry or Meritorious Medal by MHA as has been reported by some media outlets/persons," Jammu and Kashmir Police said in a tweet.

"Only gallantry medal awarded to him during his service is by the erstwhile J&K State on Independence Day 2018 for his Participation in countering a Fidayeen Attack by Terrorists at District Police Lines Pulwama on 25/26 Aug 2017, when he was posted there as DySP. Media persons are advised to avoid speculative stories not based on facts," the J&K Police added.

They said a special investigation team is handling the interrogation of the "arrested accused officer and the terrorists which would probe his criminal conduct in the instant case and his involvement in any such criminal acts in the past".

The police said it will treat Singh at par with terrorists.

Singh is being interrogated for his role in helping terrorist Naveed Babu to escape from Kashmir to Pakistan.

The police detained the officer, along with two militants when the trio was travelling in a vehicle on Srinagar-Jammu highway at Wanpow.

Davinder had a robust record in anti-militancy operations and had honoured with the gallantry award in 2017. Currently, he was posted as DSP, Anti-hijacking, at the sensitive Srinagar International Airport. Recently, Singh was seen in government-released pictures, receiving foreign diplomates last week.