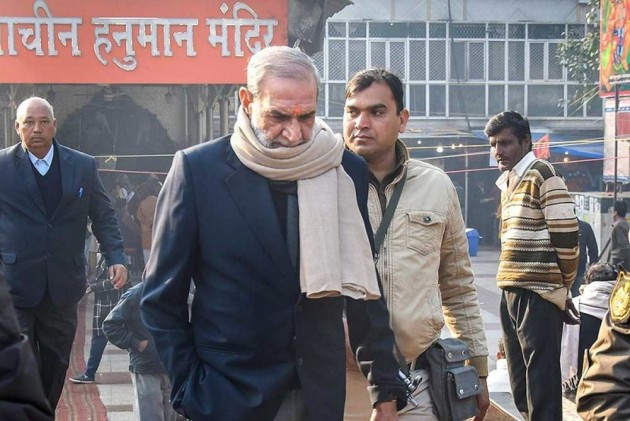 Former Congress leader Sajjan Kumar Thursday approached the Delhi High Court seeking time till January 31 to surrender in connection with a 1984 anti-Sikh riots case in which he was recently sentenced to life imprisonment.

Advocate Anil Sharma, representing Kumar, said they need some more time to file appeal before the Supreme Court challenging the High Court's verdict and Kumar has to settle his family matters relating to his children and property.

The plea is likely to come up for hearing on Friday.

The case relates to killing of five Sikhs in Raj Nagar part-I area in Palam Colony in South West Delhi on November 1-2, 1984, and burning down of a Gurudwara in Raj Nagar part II during that period.

The High Court had on December 17 convicted Kumar and sentenced him to imprisonment for "remainder of his natural life" in another 1984 anti-Sikh riots case, saying the riots were a "crime against humanity" perpetrated by those who enjoyed "political patronage" and aided by an "indifferent" law enforcement agency.

Other Case Against Kumar

Meanwhile, Kumar appeared before a Delhi court Thursday in a 1984 anti-Sikh riots case amid tight security, three days after he was convicted in another riots case by the High Court here.

Kumar, who is accused of instigating a mob to kill Sikhs, surrendered his mobile phone before the court following directions of the high court in its order convicting him on December 17.

The court adjourned the matter for January 22 after Kumar said his main counsel was unavailable.

In the case before the trial court, three persons -- Kumar, Brahmanand Gupta and Ved Prakash -- are facing trial on charges of murder and rioting pertaining to the killing of Surjit Singh in Sultanpuri.

The riots broke out after the assassination of former prime minister Indira Gandhi by her Sikh bodyguards on October 31, 1984.

The witness, Cham Kaur, had on November 16 this year identified Kumar before the court as one who had allegedly instigated the mob to kill Sikhs.

Kaur had told the court that she had seen Kumar allegedly addressing a crowd in the national capital's Sultanpuri area in 1984 that Sikhs had killed "our mother" and instigated the mob to kill them.

"On October 31, 1984 we were watching TV on the demise of Indira Gandhi. On November 1, 1984 when I stepped out to look for my goat, I saw accused Sajjan Kumar addressing the crowd and was saying 'hamari ma maar di, Sardaro ko maar do' (They killed our mother, kill the Sikhs)," Kaur had told the court.

She had further said the next morning, they were attacked in which her son and her father were killed.

"My son Kapoor Singh and my father Sardarji Singh were pulled out of the hiding place on second floor, beaten badly and were thrown down from the roof," Kaur had said, adding that she also received injuries in the attack.

Before Kaur, another key prosecution witness Sheela Kaur had identified Kumar as one who had instigated a crowd in Sultanpuri.

The case was transferred from the Karkardooma court to the Patiala House court here by the Delhi High Court, which had directed the district judge to video record the proceedings at the cost of the accused.

Kumar and two other accused -- Brahmanand Gupta and Ved Prakash -- had said that they were ready to bear the expenses of the videography of proceedings.

The proceedings in the case were earlier stayed after the victim and complainant Joginder Singh approached the high court seeking transfer of the case while alleging that evidence was not being properly recorded.