Home  »  Website  »  National  » Opinion  »  In The 'Good’ Hindu Versus 'Bad’ Hindu Politics Of Gujarat, Dalits Will Need A Social Movement To Show The Way
Opinion

In The 'Good’ Hindu Versus 'Bad’ Hindu Politics Of Gujarat, Dalits Will Need A Social Movement To Show The Way

SCs in Gujarat, due to their miserable numbers and degraded social status, have been turned into plebeians with voting rights. 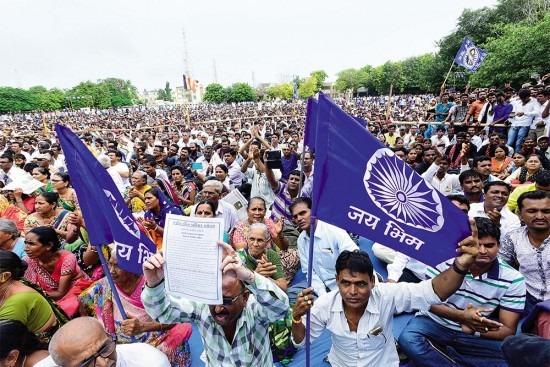 File Photo
Suryakant Waghmore December 30, 2017 00:00 IST In The 'Good’ Hindu Versus 'Bad’ Hindu Politics Of Gujarat, Dalits Will Need A Social Movement To Show The Way

I started temple entry satyagraha only because I felt that was the best way of energizing the Depressed Classes and making them conscious of their position. As I believe I have achieved that purpose I have no more use for temple entry. I want the Depressed Classes to concentrate their energy and resource on politics and education and I hope that they will realise the importance of both. (Ambedkar on Temple Entry, 1934)

Gujarat is among the states with lowest population of Scheduled Castes (around 7 percent). SCs here are comparatively less poor and have higher literacy rates compared with some major states. However, in terms of dignity and inclusion, the status of Gujarat’s SCs has been worrisome, even before BJP gained power. Untouchability as a popular cultural practice thrived through anti-colonial and post-colonial politics.  Accommodation of SCs into mainstream Gujarati society and culture is predicated upon their acceptance of subordinate status and their docile assimilative capacities.

Thus, Gandhi’s Harijans, despite some economic changes continue to face prejudice, violence and persistent injustice. They have been relegated to the periphery of Gujarati society and polity; both under Congress and post-Congress regimes. This tells us more about the influence, even control, of regressive culture and sentiments on dominant political parties and state apparatus in Gujarat.

In 2015, the rate of registered crimes against SCs in Gujarat was higher than in bigger states such as Tamil Nadu, Maharashtra, Karnataka, Uttar Pradesh and Kerala, which have larger SC populations. Similarly, the rate of conviction in such crimes in Gujarat is far lower than the national average. Several studies have noted the large scale prevalence of untouchability in Gujarat. The flogging of SC youth in Una may be a mere speck of the seemingly routinized violence and exclusion SCs face, even in a Gujarat that has taken to democracy and modernity.

SCs in Gujarat, due to their miserable numbers and degraded social status, have been turned into plebeians with voting rights. There have been no leaders of political consequence amongst them while they have received near-negligent sympathy from liberals, non-liberals and the state machinery alike.

The reasonable performance of Congress in Gujarat has shown a glimmer of hope. Hardik Patel (a Patel), Alpesh Thakore (an OBC), Jignesh Mevani (a SC) and Rahul Gandhi are being viewed as the voice of youth challenging the BJP’s polarising politics. More particularly, Jignesh Mevani has been hailed as new ray of hope for Dalit-Bahujan politics.

Mevani contested as an independent candidate to win Vadgam, a seat reserved for SCs. For someone from a formerly-untouchable caste background, to rise so fast and this high in politics, is no less than a miracle. Generally, reserved seats are won by SC/ST candidates identified by dominant parties to suit their ideological and pragmatic interests. For a SC candidate to win a reserved seat as an independent is almost next to impossible. This is because neither caste calculations nor the popular imagination favour such an experiment. Mevani has thus defied the logic of localised democratic politics in which caste, religion and money power prove to be vital. His success is indeed phenomenal given his aggressive stance on the Dalit question. Mevani’s success has provided hope and solace to disgruntled groups and critical intellectuals alike. He is no doubt a new age Dalit-Bahujan leader in Gujarat, and one who understands class issues too. He talks about land rights and is critical of conservative Dalit groups that cannot think beyond caste too.

However, appeal to class equality in Dalit politics may not necessarily fetch votes. While campaigning for the 2013 Assembly elections in Madhya Pradesh, Mayawati had announced three acres land to the landless. Yet, BSP’s vote share dropped from 9 per cent in 2008 to 6 per cent.

To better understand Gujarat elections and the exclusion of numerically and socially marginal groups, we need to celebrate the rise of a Dalit icon cautiously. Electoral politics requires more than class to garner support. This is because democracy is increasingly about cultivating emotions, morals and identities that could aspire to constitute a majority and embody the state. In Gujarat, for more than two decades, Hindu sentiment has been able to override any alternative public effervescence. It is a place where BJP has claimed power with (genuine) Hindu inclinations, motivations and action. Although anti-incumbency could have been a factor in the recent elections, it has been an uphill task for the Congress to challenge the universality of Hindu emotion constructed by BJP.

Along with religion, development (class?) is the new universal of BJP. Both Rahul Gandhi and the BJP campaigned in the name of development. Additionally, Gandhi visited several temples, forcing the BJP to make claims of being the original ‘Hindu Party’.  The spectacle of temple visits was a significant repertoire, through which Rahul Gandhi claimed to be a good Hindu. Memes of janeu-dhari Shiva bhakt Rahul Gandhi did the rounds on social media. While Hardik, Alpesh and Jignesh represented the limited aspirations of caste, Rahul Gandhi constructed a newer cosmos of good Hindus and pro-poor politics.

The politics of religion and caste along with Gujarat’s ‘failed’ development evoked by Gandhi clearly deterred the BJP. In development-oriented Gujarati society, these elections reiterated the power of affect (emotion) over reason. They underscored recognition over redistribution, dignity (unch/neech) over development, Hindus over others and good Hindus over ‘bad’ Hindus. Would the Dalits stand to benefit from the making of good Hindus?

That Rahul Gandhi allowed and supported an assertive SC in Mevani is totally new to Congress politics. Without Congress support Mevani’s victory would have been unimaginable. Is this support temporary? More importantly, would the Mevani-Patel-Thakore ‘friendship’ translate into the Patels and other caste groups treating SC with dignity? This is most unlikely. Caste alliances in party politics can bring little change in the social practice of untouchability, more so if such alliances lack ideological groundings.

In Gujarat untouchability—like vegetarianism—seems to be a modern necessity. The modernisation and developmentalisaton of Gujarat has in fact aggravated caste sentiments, Hindu insecurities. It has normalised exclusion and violence against marginal minorities such as Dalits. In a largely Hindu majoritarian democracy, where emotion prevails over reason, politics is sorted through temple visits. Only caste (and hence, Hardik, Alpesh and Jignesh) seems to be a vital resource for challenging the BJP’s version of Hindu developmentalism.

As the politics of emotion—particularly religion—continues to dominate electoral politics in Gujarat the need to form and aggregate an alternative Hindu universal to counter BJP’s Hindu collective seems inevitable. However, some questions linger. Is Dalit emancipation possible in the ongoing competitive politics of Hindu democracy? Would dominant political parties play liberators or would they work out ways to co-opt dissent and normalise exclusion of the socially underprivileged? We may have more odds here than possibilities.

For states with limited SC populations, and where their mobilisation and politicisation is weaker, the autonomous social movements and political aspirations of SCs will remain critical. Without a doubt, it is these social movements that will underpin the larger struggle for their equality, dignity and justice.