The student was allegedly raped till she fell unconscious, and dumped at a bus stand on Wednesday. 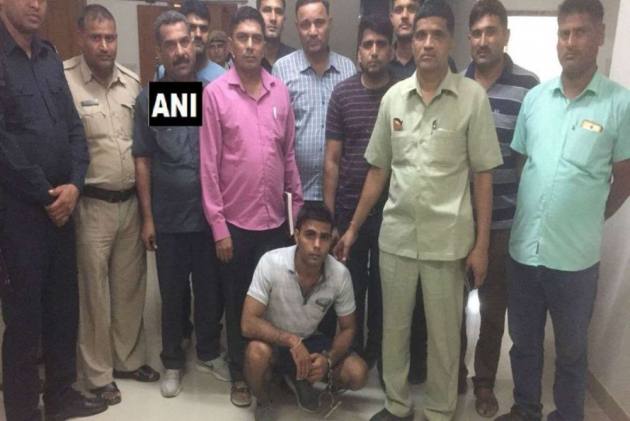 Haryana Police arrested Sunday three men, including one of the prime accused, in connection with the alleged gang rape of a young woman from Rewari.

Meanwhile, raids continued across several states to nab two other key accused, including an Army man, even as the state government cracked the whip and moved out the Rewari district police chief.

One of the three key accused, identified as Nishu, has been nabbed, Special Investigation Team (SIT) chief and Mewat SP, Nazneen Bhasin told reporters in Rewari.

A hunt is on for the two other key accused - Pankaj, an Army man, and Manish, she said. The photographs of the prime accused were released by police Saturday.

Earlier, DGP B S Sandhu, who met Chief Minister Manohar Lal Khattar to apprise him of the progress in the case, which has caused a nationwide outrage, said two other men arrested were Dr. Sanjeev, who first attended to the woman following the crime, and Deendayal, on whose property she was allegedly raped.

On alleged delay by the police to act, DGP Sandhu said ADGP Shrikant Jadhav was asked to conduct an indepth probe and submit a report.

The 19-year-old woman, a meritorious student from Rewari, was abducted from a bus stop in Kanina town in neighbouring Mahendragarh district on Wednesday when on way to a coaching class, police said.

She was allegedly drugged and gang-raped at a room adjoining a tubewell in an agricultural field, police said.

Bhasin said the victim told the police that more people were involved. "We cannot rule that out at this stage. However, no positive identification of those people has been made," she said.

An application was moved by the victim's family Sunday stating she wanted to record a fresh statement under Section 164 of the CrPC, Bhasin said.

About accused Nishu, Bhasin claimed he was involved in the gang rape and had called Dr Sanjeev when he realised the victim's condition had worsened.

To another question, she said the government had put its weight behind the SIT and every procedure concerning the case had been put on the fast track.

Chief Minister Khattar, who had an event scheduled in Jalandhar in Punjab, cut short his visit and reached Chandigarh earlier in the day and summoned the state DGP to review progress in the case. Khattar directed DGP Sandhu to ensure arrest of all the accused at the earliest, officials said.

Opposition Congress and INLD had stepped up attack on the Khattar government in the wake of the incident, alleging law and order situation had worsened under the BJP rule in the state. They demanded that Khattar resign on moral grounds.

Rewari Superintendent of Police, Rajesh Duggal, accused of failing to ensure prompt action, was moved out and has been replaced by SP, chief minister's security, Rahul Sharma, officials said.

Duggal will now lead a battalion of the Haryana Armed Police (HAP) in Hisar, they said.

The owner of the property where the crime took place, Deendayal, who was among those arrested, told police that the three key accused had taken the key to the room from him on the day of the incident, an official said.

"Deendayal's role is that he knew for what activity his property was going to be used, but did not report it to the police," Bhasin said.

Bhasin said that there were "rumours" that shady activities had taken place at the spot where the crime took place, but these were being verified.

Meanwhile, raids continued in Haryana, Rajasthan, Delhi and other states to nab the two absconding key accused. Some people were rounded up for questioning, police sources said.

Earlier, the victim's family alleged that police failed to act promptly on their complaint and delayed action citing jurisdiction issue between Rewari and Mahendragarh units.

An official of the women's police station in Rewari said a 'zero FIR' was lodged on the complaint, and the probe was being conducted by the Mahendergarh police as the incident occurred in an area under their jurisdiction.

The woman's family members told reporters in Rewari that she was in "acute trauma". "The accused should be hanged," her mother said.

She also said the family has decided to return a Rs 2 lakh cheque handed over to them Saturday by district officials under the Haryana Victim Compensation Scheme, 2013.

"We do not want this cheque. Is this the price being put for the honour of my daughter. All we want is justice. We used to hear about the long arm of the law, but what is police doing. The accused are yet to be arrested," she said.

Police have provided security to the victim's family.

Doctors at the civil hospital, Rewari, said that the victim's condition was stable, though she was in trauma.