It's suddenly Taslima Time again. Everyone gets to be happy. Everyone gets a shiny new role, new lines, new costumes. From Muslim fundamentalists to the BJP and the Sangh Parivar, and, of course, the country's largest self styled Communist Party 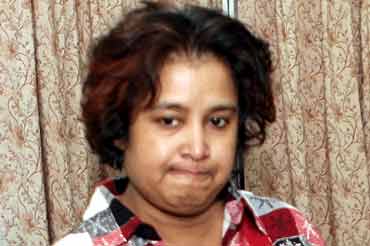 Buddhadeb Bhattacharya, who will probably go down in history as the 'Nero of Nandigram', has reason to be thankful to the exiled Bangladeshi writer Taslima Nasrin.

Everyone gets to be happy. Everyone gets a shiny new role, new lines, new costumes. Muslim fundamentalists get to play at being hardline Indian nationalists as they demand the externment of a Bangladeshi alien. The BJP and the Sangh Parivar get to discover what it feels like to champion a Bangdladeshi's right to asylum and that odd thing called the freedom of expression, giving them a much needed once-in-a-lifetime respite from the exhausting and monotonous business of having to demand the censorship of artists and writers as well as deportations of Bangladeshis all the time. And the country's largest self styled Communist Party gets to demonstrate (once more) how low it can stoop to pander to the 'religious sentiments' of a made-to-order mob. Viva la Carnival !

Meanwhile, a few things are sought to be forgotten. Nandigram. Rizwanur. SEZ.

Since the mysterious death of Rizwanur Rahman, and the 'retaking' of Nandigram--the streets of Kolkata have witnessed a flowering of fraternization between young people, students, peasants, activists and non-CPI(M) left-wing intellectuals and cultural workers. In both responses Kolkata has also witnessed the large scale and peaceful involvement of people who happen to be Muslims, and this is in part (but only in part) explained by the fact that Rizwanur was murdered because he happened to be not well off, and Muslim, and because incidentally, a large number of people affected in Nandigram also happen to be Muslim. This is not to say that the protest against Rizwanur's death, or against the carnage in Nandigram are 'Muslim' issues, it is to insist that they are platforms where many Muslims and others have met to discover new, fluid, evolving civic identities.

What this was leading to was a degree of fraternization between Muslims and others in Bengal, not on grounds of the contest or convergence of sectarian identities but on banal and utterly secular issues of the blatant misuse of power and the realities of living with capitalism as administered by an allegedly Communist Party. In this process, the CPI(M)'s cherished 'secular' and 'left' image was taking a bit of a beating. Further, an emergent, as yet ephemeral twenty first century version of the coalition of peasants, working people, young people, minorities and intellectuals--long the mainstay of Leftist politics in West Bengal, and indeed in India -- had given rise to the tantalising hope of the dawn of a long awaited democratic left alternative to the CPI(M)'s brand of decadent Market Stalinism.

By bringing up 'Taslima Nasrin', the events that forced her to leave Kolkata have sought to cut a deep divide right through the emerging coalition that included as two significant foci--subaltern Bengali peasants (often Muslim and lower caste), and a disenchanted urban intelligentsia.' Muslims' are now being mobilized to protect the faith and the Quran, and the intelligentsia is mobilizing around issues to do with freedom of speech.

A simple 'qui bono' (who benefits) analysis of the situation suggests that the CPI(M) stands most to gain from all of this. First of all, the question of crowds gathering to protest, on whatever issue, be it Nandigram or Rizwanur, will now be dealt with as a simple law and order issue in the wake of a climate of 'communal tension'. The state government is already setting itself up as a champion of order, ensuring that the 'situation' is 'tense but under control'. So no more public protests, not for a while.

Secondly, bruised as it is by Nandigram, the CPI(M) badly needs an opportunity to play messiah to the minorities in West Bengal, and this comes as a great opportunity for applying some first-aid to the 'party's' image. The signal has been given, Taslima Nasrin must leave West Bengal, and the 'hurt feelings' of Muslims in West Bengal have been tended to by the caring 'Left' Front government. It is highly likely that a few toothless but useful Imams and Maulanas will now pronounce their benediction on the CPI(M)'s tacit and utterly cynical endorsement of the move to muzzle and deport Taslima Nasrin. The 'party' will have played its 'Muslim' card after butchering Muslims in Nandigram, and having intrigued over the death of Rizwanur Rahman.

On the other hand, elements from within the rentier cultural apparatchiki of the CPI(M) that liven up the salons and soirees of South Delhi are making cooing noises of concern at censorship. The slogan on the street, the lament in the salon and the official communiqué may all be pulling the party in different directions, at least as far as Taslima Nasrin is concerned. True to form, Buddha and Biman Babu have said and unsaid things with remarkable alacrity. For the CPI(M), Taslima is both welcome and unwelcome in West Bengal, depending on who's listening. The CPI(M), after all, is a past master at the 'correct handling of contradictions' within its own people.

Muslims in West Bengal have a lot to worry about: Terrible social, economic and educational indicators (as have been revealed by the Sachar Report), unemployment, an apathetic government that holds them hostage to the shibboleth of 'secularism' and the violence that has scarred and displaced so many. Taslima neither steals Muslim bread, nor appropriates Muslim peasants land, nor keeps Muslim kids away from school, nor organizes riots against them, nor condemns them to a situation of studied social apathy. She may or may not be a good writer, and is probably not, even by her own self description, a 'good Muslim'; but by raising the kind of questions that she has raised, she is only demonstrating the continuity of her project with the long tradition of reasoned and passionate philosophical and critical enquiries about faith that have been integral to Islamicate traditions. The Muslim partisans of the letterhead organizations that took to Kolkata's streets to demand Taslima's eviction, like their Hindu fundamentalist peers, may be performatively pious, but they certainly have no handle on the rich intellectual heritage and history of doubt and scepticism within the cultures they claim as their own.

The liberty and dignity of all individuals to live and work freely wheresoever they please is as sacred as any scriptural sanction, and is of of far greater value than the fetishes of visas, passports and nationality. It is time to demand unconditional rights of residence, not only for Taslima Nasrin, but for all Bangladeshis--rickshawpullers, maids, construction workers, farm hands, artisans, pilgrims, students and others ('legal' or otherwise) who happen to have made India their home, or who may be sojourning in this country at the moment. And, while we are at it, we might spare a thought to the cleansing of Nandigram.

India Will Provide Shelter To Taslima, BUT...